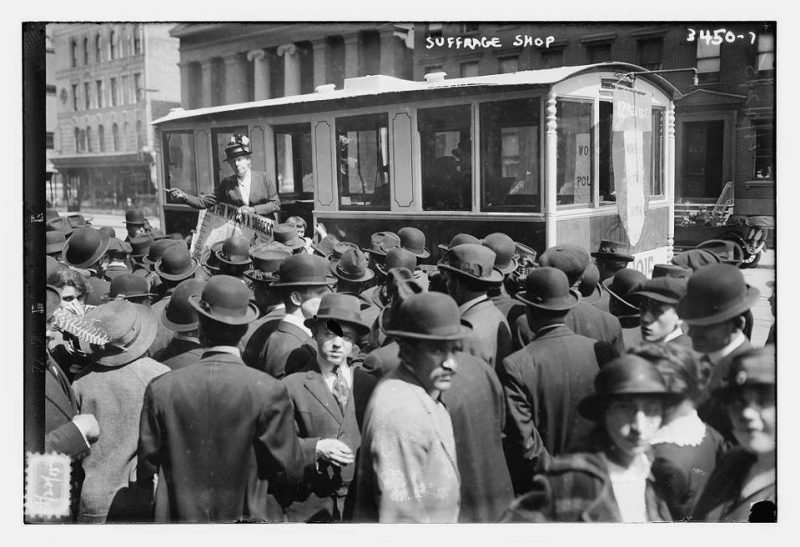 PHOTO: The Women’s Political Union’s roving “Suffrage Shop,” which brings the campaign to New Yorkers who can’t or won’t come to the rallies or campaign headquarters.

November 1, 1915: Election Day is tomorrow, so this final full day of the New York, Pennsylvania and Massachusetts suffrage campaigns has been an incredibly hectic one. In fact, for two volunteers at the Manhattan headquarters of the Women’s Political Union, it’s unending, because Elizabeth Collins and Marian Tompkins are still there even at this late hour. They will be sleeping on cots until 3:45 in the morning, when they’ll begin to call poll-watchers, as well as the Union’s numerous volunteers, who will be stationed 100 feet from polling places with literature, and answers to any questions undecided voters may ask about equal suffrage.

Though some suffragists went to bed at a reasonable hour tonight for the first time in weeks in order to be rested for tomorrow’s work, others are still up and giving speeches. Rabbi Stephen S. Wise, whose dedication to the cause in inexhaustible, was last seen at a Madison Square rally at 6:00 this evening exhorting a crowd of men to vote for woman suffrage. Another meeting arranged by Rose Sanderman didn’t even begin until 8:00, and is still going strong with no sign of breaking up anytime soon.

Members of the Men’s League for Woman Suffrage were active in both the East and West Sides late into the evening. The day’s major speechmaking effort began this morning when 200 automobiles carrying speakers, banners and literature met at the Battery, then went out to hold 500 separate suffrage rallies, visiting every district in Manhattan and the Bronx. Another smaller group of suffragists, who used a wagon and a goat cart to carry their literature, accompanied a separate group of automobiles. They started from the Bronx at about the same time, and both groups met together at 4:30 this afternoon.

The Woman Suffrage Party has told its volunteers, who will stay 100 feet from the polls and therefore be able to continue to lobby for suffrage:

“Do not enter into conversation with voters except to show them sample ballots … and make a pleasant request to vote for the Woman Suffrage Amendment. Do not give to any one any information whatever as to how the election is going – do not discuss your hopes and fears with anyone, even your fellow-worker. Be dignified. Be serious. Do not enter into argument with anyone, man or woman.”

“I do believe we are going to win. There never was such a suffrage campaign in which things were apparently so favorable as they are here in New York, but at the same time I have never taken part in a campaign in which there has been such great hostility as here in New York. And, also, I have never been in a campaign where there was organized against women a band of influential men and men stooping to use such unscrupulous means of fighting.”

Harriot Stanton Blatch, a daughter of Elizabeth Cady Stanton – who would have been 100 this month – not only predicted victory, but like Catt, gave specific numbers: “I believe woman suffrage will win by a margin of 10,000. I do not believe that New York City will go for the women, but I think suffrage will lose by only a small majority, and that will be made up by the returns from up-State.” (If so, the pattern will be reminiscent of the 1911 California suffrage referendum, when the farmers, ranchers and small town voters overcame the huge deficit run up in San Francisco and other cities in the Bay Area.)

Among the city’s gamblers, odds of four to one against passage are being offered, with even odds in regard to Manhattan’s vote. But there are few takers, even among the curb brokers on Wall Street who are noted for their election wagers. Tammany Hall politicians reaffirmed their neutrality, offering as proof the fact that when they sent out sample ballots they made no recommendation on the suffrage amendment. Most of the Tammany leaders are thought to be opposed to suffrage, and several of the city’s prominent politicians have said that they think suffrage will be beaten in New York City by two to one, and go down by 75,000 votes in Manhattan.

But while some of the old, established politicians may not be sympathetic to the cause, suffrage certainly seems to have the support of the young. A straw poll was taken at Columbia University today and the vote was 431 for and 121 against. Ninety-seven of those student votes came from women, and all were in favor. Suffrage should get good press coverage in the future, as journalism students voted for it by 30 to 4.

Pennsylvania suffragists have been working hard as well, and the Pennsylvania Woman Suffrage Association has now made its final appeal in the newspapers:

“Men of Philadelphia, your wives, mothers, sisters and daughters ask you to help make Pennsylvania the next State in the nation to give justice to its women. We ask it confidently – we have faith in Pennsylvania manhood.

“There are interests opposing us that will not bear the light of day, but we do not fear them. We have faith in you. We believe that when you go to the polls tomorrow you will remember that the sole impulse behind our request for the ballot is the desire to help produce a better civilization of the kind we have today – a civilization in which men and women may work together for the common goal of family, State and nation.

“Bearing that fact in mind we believe you will vote ‘Yes’ on Amendment No. 1 so that Pennsylvania may have, in addition to the strength of her manhood, the full service of her womanhood. We believe this because we have absolute faith in your sense of fair play, and in the spirit of faith and comradeship, we rest our case in your hands.”

In Massachusetts, eight thousand women are preparing to stand their shifts 100 feet from the polls tomorrow. They will be holding up signs saying: “SHOW YOUR FAITH IN THE WOMEN OF MASSACHUSETTS. VOTE ‘YES’ ON THE AMENDMENT ENABLING WOMEN TO VOTE.”

The Massachusetts Woman Suffrage Association has summarized its appeal by saying:

“We believe the voters will heed this last personal voluntary appeal of the women rather than any appeal of a more political nature. The long campaign of the women of Massachusetts to win citizenship, as the women of 12 great Western States have done, is ended. We have appealed to the intelligence and sense of fair play of the voters. We have paid our campaign bills. We have tried to live up to the highest standards of our Commonwealth, and we await the verdict of the voters of Massachusetts at tomorrow’s election with the utmost confidence on the result.” (The “12 great Western States” referred to are presumably the 11 equal-suffrage States west of the Mississippi River, plus Illinois, where women can vote for President and local offices, but not yet for Statewide offices.)

Naturally, the “antis” are making their last-minute appeals as well, as in this one from the Fitchburg branch of the Massachusetts Anti-Suffrage Association to the men of their city:

“To the Men of Fitchburg. We appeal to you to vote ‘NO’ on the women’s suffrage amendment. We who are your partners in your home affairs and in widespread charitable work appeal to you not to throw this additional burden upon our shoulders. We do not believe that on the whole we could manage the business of government better than you do and we are sure that what falls to us under the partnership as it exists today could not be as well done. We appeal to you not to burden the majority of women whose lives are now filled in order to satisfy the desires and ambitions of the minority. We ask you to do this work yourselves as well as you can and we have confidence that in the future as in the past the men of Massachusetts will so act to safeguard and promote the interests of all members of the community, women and children as well as men.”

The suffrage struggle has become a test of endurance and resilience. There were defeats in 1912 in Ohio, Wisconsin and Michigan, in 1913 in Michigan again, in 1914 in South Dakota, Ohio once more, North Dakota, Nebraska and Missouri, and just 13 days ago in New Jersey. But no one gave up, so there have been victories as well: Added to the States of Wyoming, Colorado, Utah and Idaho won between 1869 and 1896 there have been Washington State in 1910, California in 1911, Arizona, Oregon and Kansas in 1912, then Nevada and Montana in 1914. It’s still debatable whether tomorrow’s result will be a repeat of 1912’s three losses or its three victories, but one thing is for certain. Our cause marches on, and it now stands three years closer to final victory than it was in 1912 regardless of what happens tomorrow.