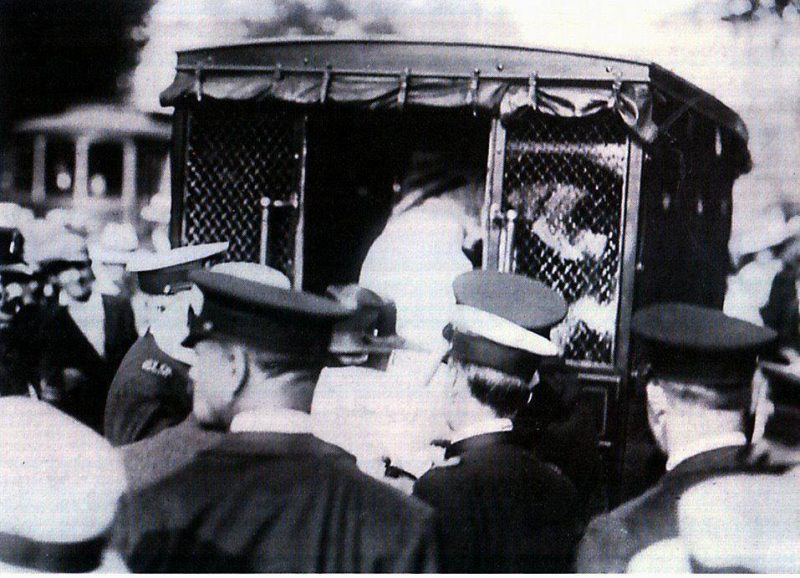 November 10, 1917: Earlier today, forty-one brave suffragists answered the question of whether recent mass arrests followed by increasingly lengthy prison sentences would be enough to prevent American citizens from asserting their right to peacefully voice their demand for political equality. The answer was a unanimous and defiant “No!”

Picketers came to Washington, D.C., from as far away as Oregon, and ranged in age from very young women up to age 73. The demonstrators, each carrying a colorful five-foot banner, made such an impressive sight that they did not encounter the now-customary jeers or attacks as they marched.

After leaving the National Woman’s Party’s headquarters at Cameron House, the demonstrators divided themselves into five groups, with the New York contingent making the first advance toward the sidewalk next to the East Gate of the White House.

Captain Flather, of the D.C. Police, had been busy pushing back the waiting crowds who had gathered for the spectacle so that there would be room for streetcars to pass down Pennsylvania Avenue. But when the marchers approached the gate, he abandoned that work, blocked the marchers’ path, and though they were in no way interfering with pedestrian traffic, he told the women to “move on.” Eunice Dana Brannan said she would do no such thing. There were a few moments of stares and silence, while both sides waited to see if the other would back down. No one did, so Captain Flather ordered the women arrested and taken to a “Black Maria” police van for transport to the nearest station house.

As the first group of picketers was being driven off, a second group, headed by Agnes Morey of Massachusetts, and which included women from Pennsylvania and New Jersey, moved on the West Gate. They were met by police as well, arrested, and driven off in a second van. With military precision, a third group, Californian Elizabeth Kent in the lead, and composed of troops from Oregon, Utah and Colorado, immediately moved to the East Gate.

The crowd had now picked up on the pattern, so they knew to swivel their heads regularly to watch the action as if it were a tennis match. After the East Gate was cleared, the ritual was repeated again, with the West Gate coming under siege by picketers from Oklahoma, Minnesota and Iowa led by Mrs. Barnes of Indiana. Anna Kelton Wiley of D.C. and reinforcements from Louisiana, Maryland and Florida made the day’s final assault on the East Gate. Among those in this last group were Lucy Burns, just released after a 60-day sentence in the infamous Occoquan Workhouse, and Mary Nolan, age 73, the eldest of the “Silent Sentinels.” As she was being led away, Nolan said:

“I go to jail willingly in this cause only. I have come here to picket, feeling it my conscientious duty. I am in the work for good to the end of my life. I have always done everything possible for women. The only way we can gain our freedom is by the women uniting and enduring any ill-treatment the Administration gives us, providing the steadfast purpose and the nobility of the cause.”

President Wilson saw the huge crowds, and the final group of demonstrators being arrested, as he and his wife returned from a drive around town. So today’s action clearly succeeded in reminding him of the fact that many see hypocrisy in his vigorous advocacy of democracy around the world, while doing nothing to support the Susan B. Anthony (woman suffrage) Amendment, which would bring democracy to millions of voteless women in his own country by explicitly and permanently barring sex discrimination at all polling places in the U.S.

After being transported to the police station, all the demonstrators were booked and released on $25 bail each (the full $1,025 paid by Mary Ingham) and ordered to appear in Police Court for trial day after tomorrow.

It’s going to be impossible for the Administration to shrug off these protests as being made by radicals or political enemies. Elsie Hill, daughter of the late Representative Ebenezer Hill, of Connecticut, noted:

“Once more the Administration finds itself in the embarrassing position of arresting on technical charges the women relatives of strong Administration supporters. Mrs. William Kent of California is the wife of the National Chairman of the Wilson Independent League, ex-Representative Kent, who has recently been appointed a member of the Tariff Board. Miss Mary Bartlett Dixon is a cousin of Mitchell Palmer of Pennsylvania, Democratic Floor Leader in Mr. Wilson’s first Administration, and recently appointed receiver of enemy property. Others arrested were Mrs. Harvey Wiley, daughter of the late General Kelton, U.S. Army, and wife of the pure food expert. Dr. Wiley stumped the country for the election of Mr. Wilson in his first Presidential campaign. One of the most interesting prisoners the jail authorities will have under their control is Miss Paula Jacobi of this city, who was four months matron of a prison in Massachusetts and has studied prison reforms ever since.”

Alva Belmont, a member of the Executive Committee of the National Woman’s Party, wondered: “What have we come to in America when splendid women, loving liberty, are arrested for asking, ‘Mr. President, in your message to Congress, urge the passage of the Federal suffrage amendment enfranchising women.’ ”

Alice Paul and Rose Winslow remain in the District Jail, being force-fed multiple times each day, with Paul kept in the psychopathic ward. She is threatened with being declared insane and committed to St. Elizabeth’s Asylum indefinitely if she doesn’t call off the picketing of the President by the National Woman’s Party. Neither Alice Paul, Rose Winslow, or any of the other suffrage prisoners in the D.C. Jail have any intention of giving in, and everyone arrested today intends to be just as defiant in court, as well as in prison should they be found guilty of the standard – and false – charges of “blocking traffic” on the wide Pennsylvania Avenue sidewalk.