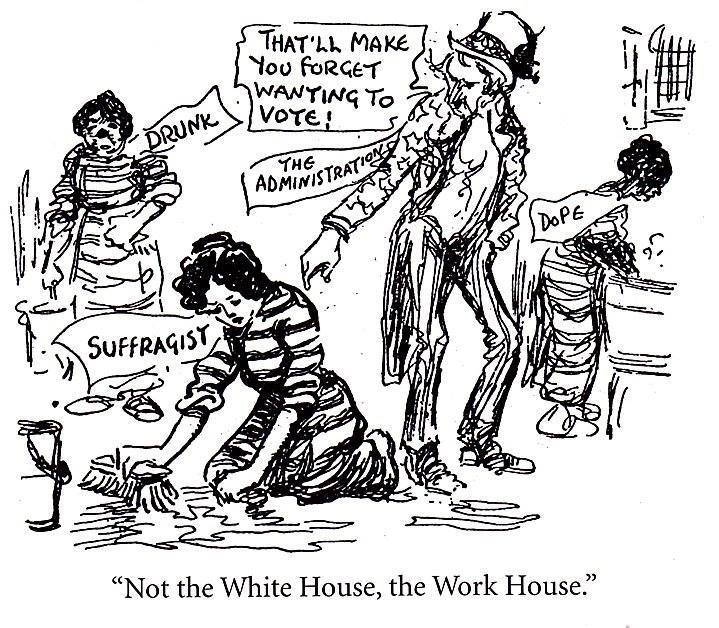 November 14, 1917: A travesty of justice in Washington D.C.’s Police Court today, as Judge Alexander Mullowney gave 31 “Silent Sentinels” outrageous sentences for trying to peacefully picket outside the White House fence on November 10th and 12th in support of woman suffrage. The “criminal offense” for which they’ll be serving time in jail is “blocking traffic” on the wide Pennsylvania Avenue sidewalk, though they have always been quite careful to avoid causing any problems for pedestrians. There may be more jail time to come, because they still face trial in the same judge’s courtroom for yesterday’s picketing.

Lucy Burns, considered by Mullowney to be the current “ringleader” of the militants while Alice Paul is serving sentences totaling seven months, and being force-fed three times a day, in D.C.’s District Jail, got the longest sentence. Lucy received six months (three for each offense, the terms to be served consecutively). Dora Lewis and Eunice Dana Brannan drew 60-day sentences, 30 days for each offense. The others got 30 days, except for three who will serve 15 days and Mary Nolan, age 73, who will serve six days. Judge Mullowney seemed quite concerned about how Mary might fare in prison, and urged her to pay the fine. But she told him:

Thirty of the thirty-one have been sent to the infamous Occoquan Workhouse in Virginia, while one, Hilda Blumberg, will go to the District Jail.

LATE UPDATE: Occoquan Workhouse is living up to its barbaric reputation tonight as the suffrage prisoners endure a night of terror that began after their arrival at 7:30 this evening.

After refusing a request to meet with the new inmates to discuss their request for “political prisoner” status, Superintendent Whittaker and a large number of guards suddenly burst into the room where the women were being processed. Dora Lewis immediately stood up and began to politely state her case for the granting of “political prisoner” status to those imprisoned for no reason other than peacefully picketing in favor of “Votes for Women.” Whittaker angrily replied: “You shut up. I have men here to handle you.” He told the guards to seize Dora. Several of them dragged her off, then others did the same for the rest of the women in the room. All the prisoners were subject to rough treatment while on their way down the poorly-lit corridors of the prison, then thrown into filthy, unheated “punishment cells.”

A number of women have already been injured. Just a few examples: Dorothy Day’s arm was twisted as she was slammed down twice over the back of an iron bench. Mary Nolan was dragged off by two guards, despite saying that she would go to her cell willingly in order to avoid having any injury inflicted on a foot she already has to treat carefully. She lost her balance when thrown into her cell, and struck the iron bed. Alice Cosu, who was rudely shoved into the same cell, struck the wall. Dora Lewis was knocked unconscious after her head hit the iron bed frame when she was thrown in with Alice and Mary. Her injury was so severe that for a short time both women thought Dora was dead.

Alice Cosu appears to be having heart problems caused by the brutality and stress, but the guards have so far refused to summon a doctor to examine her, so no one knows her true condition for certain at this time. Lucy Burns is presently manacled to the bars of her cell with her hands over her head. Along with the other prisoners, she has been threatened with being placed in a strait-jacket and gagged if she keeps trying to talk with fellow inmates.

Superintendent Whittaker has made no secret of his hostility toward militant suffragists, and when Margaret Kessler was recently serving 30 days in Occoquan, he told her:

The picketing will NOT stop, nor will the total resistance of the suffragists in Occoquan, so this confrontation has just begun.