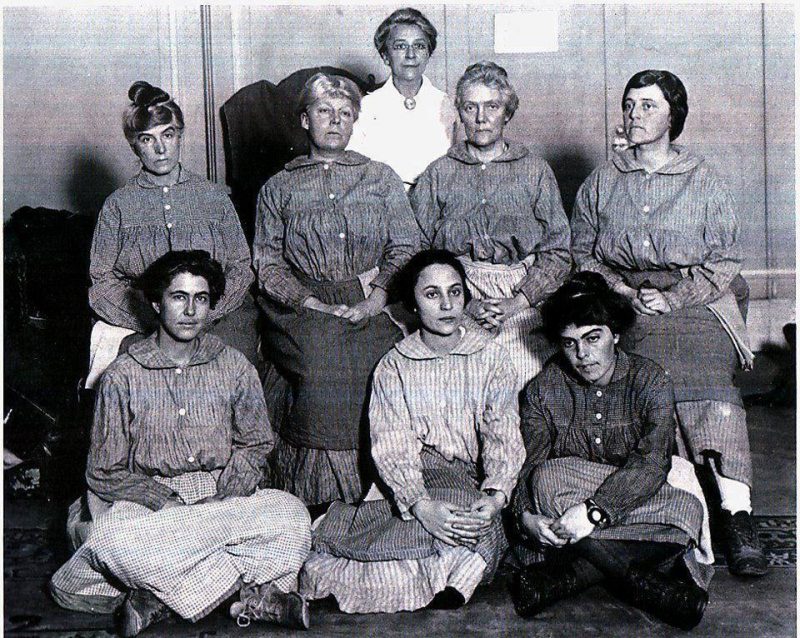 Middle row, from left: Eunice Dana Brannan, head of the N.W.P.’s New York branch. She is the daughter of the late Charles Anderson Dana, who was editor and part-owner of the New York Sun. She is the wife of J.W. Brannan, head of Bellevue Hospital; Elizabeth Selden Rogers, one of the N.W.P.’s best speakers, and a descendant of Roger Sherman, a signer of the Declaration of Independence; Dora Lewis, from an influential Philadelphia family, and among the early activists in the Congressional Union for Woman Suffrage, which has become the National Woman’s Party; Alison Turnbull Hopkins, head of the N.W.P.’s New Jersey branch, and married to J.A.H. Hopkins, a leader of the Progressive (“Bull Moose”) Party.

Back row: Virginia Bovee, who was fired from the Workhouse in September after verifying the abuse and unsanitary conditions in the jail that the ex-prisoners had exposed to the public.

November 15, 1917: Hunger strike! The policy of total resistance to the authorities at Occoquan Workhouse by imprisoned suffragists until they are granted political prisoner status has now expanded to rejecting all food, according to a bulletin from the National Woman’s Party.

Other news about the suffrage prisoners was learned from Catherine Morey. She went to the Workhouse earlier today in an attempt to see her mother, Agnes. Though all the suffrage prisoners are being denied contact with anyone on the outside, she did get some information about them from Assistant Warden Hall. He told her that the women were still refusing to give their names or any other personal information, and won’t change into prison clothes. Hall also confirmed that the suffrage pickets are now following the example of Alice Paul and Rose Winslow, currently being held in D.C.’s District Jail, and will not take food voluntarily. According to the same source, the prisoners are still in the unheated “punishment cells” they were brutally thrown into last night, are using flat mats for beds, and have no bedding.

The power of a hunger strike was demonstrated this morning when “Silent Sentinel” suffrage pickets Gertrude Crocker and Gladys Greiner were freed from the District Jail seventy-two hours after refusing all nourishment. They had been sentenced to 30 days on October 22nd. Paul and Winslow, the most prominent suffrage prisoners there, continue to refuse food, and are being force-fed three times a day. They show absolutely no signs of being ready to give up their hunger strike, and prison officials appear equally unwilling to compromise on any of the suffragists’ demands for fair treatment and improved conditions, so this may be a very long standoff.

Alice Paul was arrested on October 20th, and on October 22nd began serving sentences totaling seven months. Six months were imposed for one false charge of “blocking traffic” on the sidewalk while picketing along the White House fence, and the other 30 days were for another such “offense.” She stopped eating on November 5th, and the force-feedings began seventy-eight hours later on the 8th.

Rose Winslow was arrested on the same ridiculous charge as Paul on October 15th, and the next day was sentenced to six months by Police Court Judge Alexander Mullowney. On October 22nd, she and three other prisoners were given an additional 30 days by Mullowney for a previous offense. At the time of their trial on that earlier charge Mullowney had suspended their sentences, hoping that the threat of jail might keep them from picketing again. It didn’t, so on the 22nd, he decided to bring them back to court and impose the 30 days for that earlier conviction. Winslow has been in prison since October 16th, and began her hunger strike at the same time as Alice Paul.

Some of the suffragists being held in Occoquan are shown in this photo taken three days ago. On November 12th, the same day they tried to stage another round of picketing along the White House fence, the National Woman’s Party held a press conference at its headquarters. Those who had been jailed previously, and were willing to face imprisonment again put on replicas of their prison uniforms and explained to reporters why they must take the actions they do.