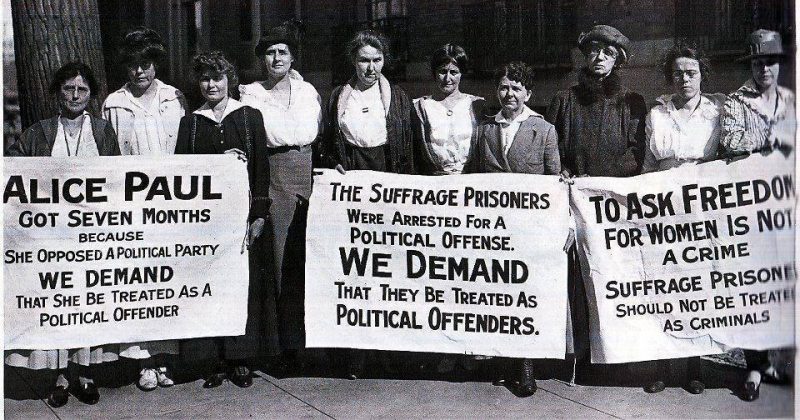 PHOTO: A protest over the imprisonment of the “Silent Sentinel” White House pickets not long after Alice Paul was sent to the D.C.’s District Jail on October 22nd and denied “political prisoner” status. Among those protesting was Lucy Burns, seen just above the letters “PA” in the word “PAUL” on the banner. Day before yesterday Burns was sent to Occoquan for six months for trying to picket along the White House fence on November 10th and 12th.

November 16, 1917: The isolation of the suffrage prisoners in Occoquan Workhouse was finally broken today, and details about their ordeals are about to become known to the public. A court order forced Superintendent Whittaker to admit a lawyer for several of the prisoners into the jail, and a note from Lucy Burns briefly describing some of her experiences from the time she arrived at the prison through earlier today has been smuggled out, and given to the press.

“My clients reported to me that from the time of their arrival every effort was made to terrorize them; that they were not allowed to state to the Superintendent their desires; that when an attempt was made by Mrs. Lewis, speaking for all of them, to tell Superintendent Whittaker that they expected to be subject to no indignities, thirty women were seized by eighty guards, flung off their feet and dragged from the room.

“My clients informed me that because they refused to give their names the Superintendent ordered his guards to seize them and they were taken to punishment cells in the men’s quarters. On their arrival there Mrs. Lewis and Miss Burns were threatened with being placed in strait-jackets, and gagged if they persisted in talking. Both the ladies refused to cease talking to each other and Miss Burns was then manacled to the bars of her cell, used to confine prisoners suffering from delerium tremens.

“Other indignities were offered the ladies, and when they asked for counsel they were told they would not be permitted to see counsel during their entire incarceration. The only reason given by Superintendent Whittaker for transferring the prisoners to the cells in the men’s quarters was that they refused to give their names and to don the prison garments.

“In refusing to talk, the women were exercising their constitutional right of free speech. The guarantee of free speech carries with it the right to withhold your speech if you so desire.

“The indignity of compelling these prisoners to wear the stripes of a convict was an added punishment which was not pronounced by the court. The treatment of my clients as reported to me constitutes cruel and unusual punishment, which is prohibited by the Constitution.”

Additional evidence of abuse was contained in a note written by Lucy Burns, and smuggled out by the daughter of imprisoned suffragist Agnes Morey, who briefly accompanied O’Brien into the prison before being ejected. In the note Burns writes:

“Wednesday, 14th: Demanded to see Whittaker when we arrived. Request refused. Miss Herndon said we would wait all night. Privilege of leaving room refused us.

“Man guard said he would put us in sardine box and put mustard on us. Whittaker came at 9 p.m. Refused to hear demand for political rights. Seized by guards and dragged to cells in man’s part. Dorothy Day roughly seized. Back twisted. Mrs. Mary Nolan flung in cell. Mrs. Lawrence Lewis shot past my door. I slept all night with Dorothy Day on single bed. I was handcuffed for asking others how they were. Fastened for short time to bars of cell. Threatened with strait-jacket and button gag.

“Thursday. Brought to hospital. Food brought at noon for first time. All refused it.

“Friday. Expected to go to court. Said to matron over telephone, ‘No orders.’ Whittaker came. Seized Julia Emory by back of neck and threw her in room very brutally. I asked for counsel to learn status of case. He told me to shut up. Threatened strait-jacket and button gag again.

“Later I was taken to put on prison clothes. Resisted strenuously. Put in a room where men with delerium tremens were put. Six guards tried to remove clothes.”

Thirty of these “Silent Sentinels” who have peacefully picketed outside the White House fence in an attempt to get President Wilson to support the Susan B. Anthony (woman suffrage) Amendment, were due to come up for sentencing today. Elizabeth Kent was given the standard choice of a $ 25 fine for allegedly “blocking traffic” on the wide Pennsylvania Avenue sidewalk, or serving time in the Workhouse. She wanted to take the 15 days, but discovered that her husband had paid the fine for her. She protested and demanded to go to Occoquan. The judge wasn’t sure what to do, so he postponed his decision for four days.

Anna Kelton Wiley also insisted on a Workhouse term, but an attorney hired for her by her husband wanted to appeal her conviction, so a somewhat exasperated judge told the lawyer and the Wileys to get together and make up their minds about what they want to do so he can issue a ruling. Wiley has now refused to permit the filing of the bond required for appeal, and is expected to be taken to the Workhouse soon.

But 28 more suffragists, already serving time in Occoquan on previous charges, were not present in court as expected. A high-ranking official had prohibited them from leaving the Workhouse, with no explanation given as to who gave the order or why.

Marines from Quantico, Virginia, have now been brought in to guard the grounds around the Workhouse in order to keep friends, family members and supporters of the imprisoned suffragists from sneaking into the courtyard to call to prisoners in their cells to find out what kind of abuses are taking place. But lawyer O’Brien will continue to take any legal actions necessary to have access to his clients in the Workhouse.

O’Brien also intends to seek a Congressional inquiry about why the treatment of these women – whose only “offense” is to display banners contrasting President Wilson’s vigorous support for democracy around the world with his apathy toward bringing it to the women of his own nation – are given sentences more appropriate to violent crimes, and why those who are imprisoned for exercising their Constitutional right of protest are in many cases being treated worse than those guilty of the most serious offenses.