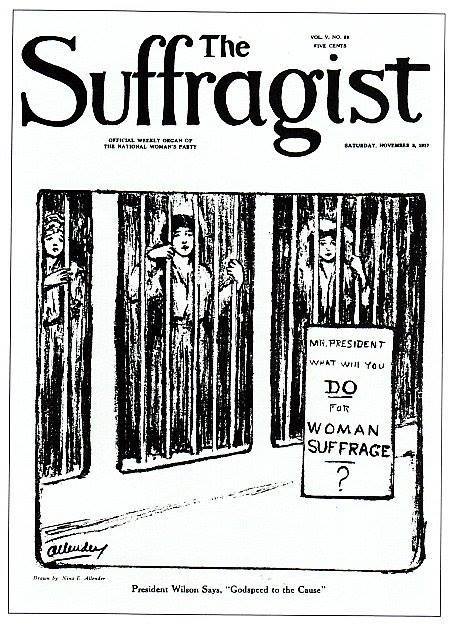 PHOTO: Nina Allender’s cover of a recent issue of the National Woman’s Party’s official publication, highlighting the current imprisonment of some of its members. The sign, one commonly carried by the pickets, says: “Mr. President, What Will You Do For Woman Suffrage ?” The caption is: “President Wilson Says ‘Godspeed to the Cause,” noting his words of support but lack of deeds.

November 17, 1917: Public support for the imprisoned “Silent Sentinel” suffragists is increasing now that newspapers have begun to print excerpts from a note written by Lucy Burns, which was smuggled out of Occoquan Workhouse. The lawyer for several of the women in Occoquan was also able to visit them yesterday and is still talking to the press about what he observed and was told there.

Helen Todd, representing the Committee of 1,000 Women, formed to aid the suffrage prisoners, left New York City this evening for Washington, D.C., to ask President Wilson to appoint an unbiased investigator who will look into conditions under which those who have been arrested while picketing for woman suffrage are being held.

On November 13th, Todd and a few other suffragists had the opportunity to take a tour of the District Jail with the Commissioner in charge of District of Columbia prisons. Though she was not allowed to talk to Alice Paul or any of the other inmates there, or go to Occoquan Workhouse in Virginia, Todd was still shocked at the conditions she observed. Commissioner Gardner appeared to be sincere about accepting her suggestions for improving the institution, and bringing its standards up to at least the minimum level of other prisons.

Todd is particularly concerned about the hunger strikers:

“After we had seen some of the prisoners who had been on a hunger strike we actually wept. They were our personal friends, and they were emaciated and in a deplorable condition. Some of the most senseless hardships had been inflicted upon them. One had not been allowed air for fear that if the window were opened, she would talk to people on the outside. Another was not allowed to wear her own nightdress. She would not wear the prison garment, which did not reach her knees, and was wrapped in a sheet when we found her. When we talked of this to Commissioner Gardner, he was on the verge of tears himself, and promised to do everything in his power to lighten the lot of the prisoners.”

But Gardner has done nothing yet – not even answered Todd’s letters – so she has now decided to go straight to the top and try to get President Wilson to act.

Alice Paul began serving sentences totaling seven months in the District Jail on October 22nd, went on a hunger strike with Rose Winslow on November 5th, and both have been force-fed three times a day since November 8th. Paul has been confined to the psychopathic ward, presumably as additional punishment for being the leader of the White House pickets. On November 14th, thirty picketers were tried, convicted and sent to Occoquan Workhouse, where they were terrorized and brutalized soon after arrival. They are now on a hunger strike, with Lucy Burns as their leader.

The protesters have been picketing along the White House fence since January 10th, and beginning on June 22nd have been subject to arrest on false charges of “blocking traffic” on the wide Pennsylvania Avenue sidewalk. They are demanding that President Wilson endorse, then lobby a Congress controlled by his own Democratic Party, for passage of the Susan B. Anthony (woman suffrage) Amendment to the U.S. Constitution so it can be sent to the States for ratification. These “Silent Sentinels” carry large banners with inscriptions highlighting the contrast between Wilson’s vigorous support for democracy worldwide and his apathy toward bringing democracy to millions of women in his own country who live in States where they are barred from the polls.

The total dedication of these imprisoned suffragists is generating a lot of attention in the press, and helping focus the attention of the public on our cause right now. Their ordeals must not be forgotten after the battle is won.