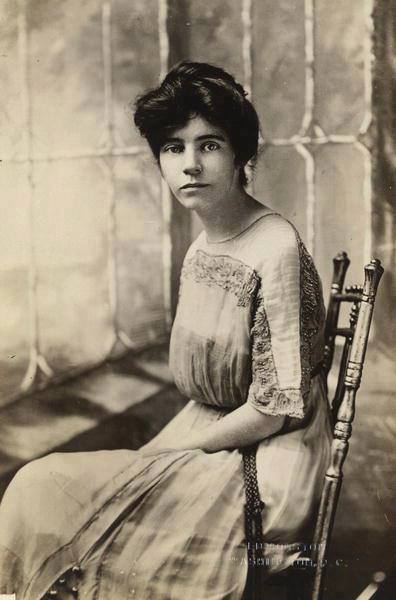 November 18, 1917: National Woman’s Party leader Alice Paul has finally been transferred out of the psychopathic ward of Washington, D.C.’s District Jail, and today succeeded in smuggling a note out of the hospital ward where she is now being kept during her hunger strike and force-feedings.

Her confinement in the psychopathic ward was never really about her sanity. She was singled out for extra punishment for coordinating the protests by the demonstrators who have been picketing President Wilson by standing along the White House fence with large banners each day since January 10th.

These “Silent Sentinels” are highlighting the contrast between President Wilson’s untiring advocacy of democracy around the world and his lack of any meaningful effort to help win it for the women of his own country. He has yet to even endorse the Susan B. Anthony (woman suffrage) Amendment, or use his considerable influence to help get it passed by 2/3 of both the House and Senate – each controlled by his own party – then sent to the States for ratification by 3/4.

Over the past few days a number of prison officials have admitted that they have no doubts about Alice Paul’s sanity, and at that point, the policy of subjecting her to the atrocious conditions of the psychopathic ward became so obviously punitive, unjustified and illegal that her confinement there could no longer be continued. In a note to Doris Stevens, who is temporarily heading the National Woman’s Party in Paul’s absence, Alice wrote:

“Miss Winslow and I are at opposite ends of the building, each locked in her room, with an iron barred door. I saw her as they brought me on a stretcher from the psychopathic ward, but I have not seen her since. We are each in a ward with three windows. Today they nailed two of my windows shut so that they cannot be opened. The third window has been nailed shut at the bottom, so that the only air I have now is from the top of one window.

“This was done by the order of Dr. Gannon. He seems determined to deprive me of air because air was one of the things we demanded in our letter asking for recognition as political offenders. We have, of course, been deprived of everything else that was included in our original demand – letters, books, visitors, decent food, except as they force it upon us through tubes. Two weeks ago they did give us letters like this one, on the back of which I am writing.”

Despite a large number of letters of support written to her from around the country, the only ones given to her by her jailers have been those from her harshest critics. The letter on which she wrote her note said:

“Why not let this miserable creature starve. The country would be much better off without her and the balance of her gang of pickets. They are a rotten lot, and are crazy, and should be locked up for life. If they would starve it would save the expense of keeping them. Let them starve.”

Alice Paul’s note continues, with a reference to Dudley Field Malone, lawyer for the pickets:

“I was in the psychopathic ward just a week, and was only released, I think, because of Mr. Malone’s efforts. It was apparently an attempt at intimidation. Dr. Gannon said that if I persisted in hunger-striking he would ‘write a prescription’ to have me taken to the psychopathic ward and fed forcibly. I was thereupon placed on a stretcher and taken there. Dr. Gannon, another doctor and several nurses then proceeded to feed me forcibly.

“As he was leaving the room Dr. Gannon turned to the nurse and instructed her to ‘observe’ me. The nurse ‘observed’ me once an hour through each night, coming to the door and turning on an electric light, which flashed into my face. At first I wakened each time. After a while I grew accustomed to it.

“In addition to this little device of observing, they used other means to make one know one’s sanity was doubted. A Dr. La Conte came and examined. Dr. La Conte then told me I was not in a mental condition, as I must, of course, know, to judge things for myself. He and two other doctors and three nurses fell upon me and took samples of my blood by force.

“I was locked in my room, so I did not see other inmates except once or twice, when they came down the corridor and looked through my bars. One could hear them, however. The last morning I was there cries began at 5:30. I turned on the light to look at the time. The cries probably awakened me.

“The morning before, they began when it was still dark. I did not ascertain the time. When one person starts shrieking the others usually join in and continue for an hour or two. Then all would be silent for several hours, when the cries would be resumed.

“One day when I had a new nurse, she introduced herself thus: ‘I know you are not insane.’ She was endeavoring to be kind, but it was staggering to have people express their friendliness to you by assuring you they did not consider you insane.”

Alice Paul has been serving sentences totaling seven months in the District Jail since October 22nd, has been refusing food since November 5th, and been force-fed three times a day since November 8th. Rose Winslow, another suffrage picket in the District Jail, began her hunger strike at the same time, and is also undergoing the ordeal of force-feeding. Neither they, nor any of the suffragists imprisoned in Occoquan Workhouse have any intention of abandoning either their principles or militant tactics until the battle is won, with a Constitutional amendment explicitly and permanently banning sex discrimination at the polls.