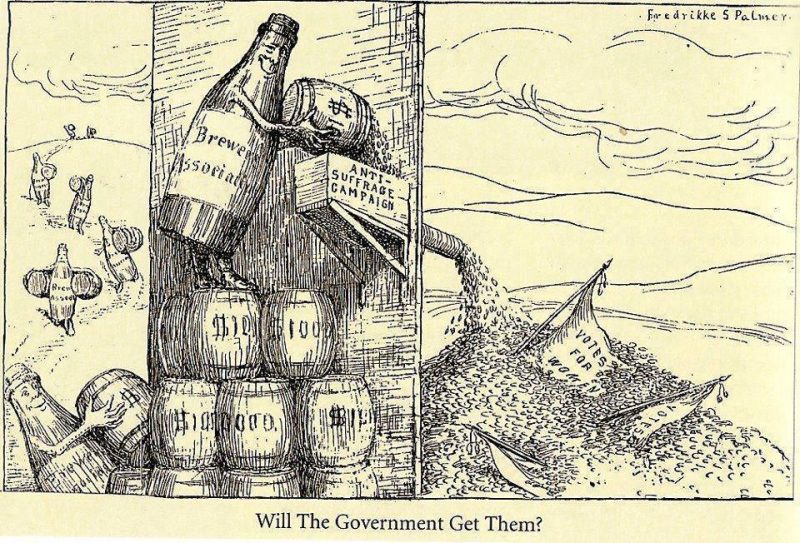 PHOTO: The role of the liquor industry in donating vast amounts of money to the anti-suffrage movement out of fear that women will impose prohibition if they win the vote is lampooned in this cartoon by Fredrikke S. Palmer.

November 2, 1915: Never before has the cause of woman suffrage been better presented to the public, nor has it ever gotten more favorable votes from the male electorate than today. And though the most obvious sign of progress may be missing, in that the number of States in which women have full suffrage is the same tonight as it was before the massive Eastern campaign began, there is no doubt among any supporter of this magnificent effort that public support has increased greatly over the past few months, making eventual victory more certain, even if that day is farther in the future than had been hoped.

Reverend Anna Howard Shaw has been here at the National American Woman Suffrage Association’s headquarters on New York’s Fifth Avenue all evening as the latest reports continue to come in. She was just asked about how long today’s triple defeat in New York, Pennsylvania, and Massachusetts would delay a new attempt to win another State: “Until we can get a little sleep. The fight will be on tomorrow morning – on forever, until we get the vote,” she replied, in an answer that would have been the same if given by anyone here tonight. Shaw continued:

“If, when the final count is in, we have not won the State, we have at least won the greatest victory in the history of our cause, because we have won the biggest number of votes ever cast for that cause. Although we may not have won the ballot this time, we have won hundreds of thousands of supporters by this fight. We have lost nothing. It is our opponents who have lost. They had the whole State before, they haven’t now. We are the only victors in this fight.”

Shaw is already looking forward to the next State Constitutional Convention, and having a suffrage amendment included among those submitted to New York voters. And when it is, “we will sweep the State,” she confidently declared.

In speaking of the defeat in Massachusetts, Reverend Shaw said that her eight years of preaching in Cape Cod made her aware of just how conservative the Bay State is, and so the defeat there tonight was not unexpected: “All the young people I married moved away. The progressive blood has left Massachusetts,” she said. As for Pennsylvania, she certainly hasn’t given up hope there either: “We start anew there tomorrow night at a mass meeting in the Academy of Music in Philadelphia, at which I shall preside.”

Though pride and victory usually go together, tonight is an occasion when they can justifiably be separated. Everything that our side could control worked flawlessly. Many volunteers and staffers even went beyond the call of duty, and all made suffrage leaders proud. In New York City, thousands of women poll-watchers were at their posts when the first voters arrived, and did their work diligently until closing time, assuring that only legal votes were cast, and by those sober enough to participate in the election process.

This was the first time that women have been officially designated as poll-watchers in New York City, and they met with great acceptance by courteous male voters, contrary to anti-suffrage propaganda about what might happen if women were allowed into polling places. In fact, there was not a single report of a fist-fight at any polling place in the city, so while the ballots cast may not have resulted in women gaining the right to enter the voting booth to cast a ballot, the practice of putting women in polling places as official observers seems to have brought about an unprecedented improvement in regard to the demeanor of male voters, and is a practice that is likely to continue.

Other of our volunteers, still campaigning until the last moment, stood the required 100 feet from the polls with sample ballots and answers to any questions an undecided voter might have about the issue. Automobiles decorated with “Votes for Women” pennants and suffrage colors were seen driving on every major street all day, often greeted with applause from those on sidewalks when the pedestrians weren’t busy reading suffrage flyers or posters put up at every possible location.

Early in the evening it had been hoped that there might be a repeat of the California victory of 1911, in which the first returns were from big cities and quite gloomy, but later the farmers, ranchers and small town voters turned the tide. But the pattern wasn’t repeated in New York State. As expected, in the big cities, where corrupt machine politicians worry that women might actually “clean up politics,” and saloon owners (as well as many patrons) fret about women voters imposing prohibition, huge margins were rolled up for the “antis” at least partly due to their influence. But this time, the vast majority of rural counties voted “no” as well, with only a few localities giving slight majorities to suffrage. According to the latest projections, about 57% of New York State voters appear to have rejected equal suffrage, with an adverse majority of at least 80,000 in New York City. Pennsylvania men are voting 53% “no,” with Philadelphia providing almost the entire margin of defeat. In Massachusetts there appear to be almost two “no” votes for every “yes.”

When added to New Jersey’s 58% rejection two weeks ago, tonight’s results paint a rather pessimistic picture of suffrage 67 years after it was adopted as a goal at the Seneca Falls convention in 1848. But there is another side to the figures. Despite the fact that this is the first time a major campaign has been waged in any Eastern State, and none of the States with suffrage referenda bordered on a State where women already vote, one and a quarter million men have endorsed equal suffrage. That’s more votes than the Republican nominee got in those four States in the most recent Presidential election, so suffrage is now in the “big leagues” of politics.

No one disputes that there are many difficulties ahead. The Pennsylvania and New Jersey Constitutions both prohibit a second referendum on the same issue from being submitted to voters until five years have passed. So these will be long-term campaigns at best, though following the example of Illinois suffragists and attaining the right to vote just for President by action of the State Legislature is still a possibility. In Massachusetts, the rejection is by such a large margin that many supporters say they will be turning their attention to the Susan B. Anthony Amendment, which would ban sex discrimination in regard to voting rights nationwide if passed by 2/3 of both the U.S. House and Senate, then ratified by 36 of the 48 States.

Harriot Stanton Blatch, of the Women’s Political Union, announced tonight that she’s done with State referenda, and having to appeal to massive numbers of individual male voters. Instead, she will be concentrating on lobbying just the 435 men in the House and 96 in the Senate for passage of the Anthony Amendment, a strategy Alice Paul’s Congressional Union for Woman Suffrage has been advocating for some time.

But Reverend Shaw is convinced that by continuing to use the political machinery and expertise that has been built up during this campaign, the 43% support for suffrage that already exists among the male voters of New York State can be increased to 50% plus one. If this could be done, it would be the kind of victory in a populous Eastern State that would not just regain the suffrage movement’s credibility and momentum, but force New York’s biggest-in-the-nation Congressional delegation to worry about women’s votes, and therefore push for the Anthony Amendment.

So, though the “antis” may be celebrating their biggest victory tonight, they had better not sleep late tomorrow thinking suffrage advocates are dejected enough to give up the fight, or even take a long break. The new campaigns begin in just a few hours, and on multiple fronts. No one here sees the 42% – 47% support for “Votes for Women” in Pennsylvania, New York and New Jersey as a ceiling that will always keep women close to – but never quite able to reach – the ballot box. Instead, it’s a solid floor upon which to build the last steps to victory in these States, with New York to be first!