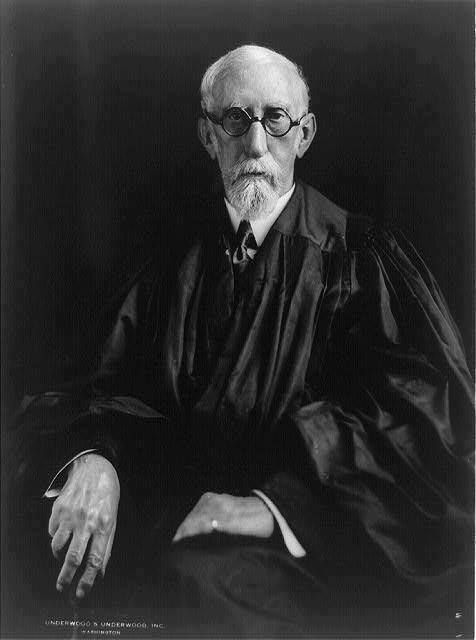 November 23, 1917: Everyone in Judge Edmund Waddill’s packed courtroom in Alexandria, Virginia, this morning was shocked by the weak and emaciated condition of the hunger-strikers among the suffrage prisoners brought out of Occoquan Workhouse for a hearing they had requested in U.S. District Court. Even some of the healthiest among them had trouble walking to their seats, and a few seemed not fully aware of what was going on around them.

About half the prisoners were hunger strikers, and because some of them lacked even the strength to sit up, they were stretched out on benches with a coat put under their head as a pillow. Marks from brutalities inflicted on the night of terror when they arrived at the Workhouse could still be seen on some, much to the embarrassment of the neatly dressed prison officials who were responsible for their injuries. Eunice Dana Brannan was in the worst condition. She collapsed soon after entering court, and needed to be carried to a couch in another room.

Two of the original “ringleaders” of the suffragists imprisoned in Occoquan were not present. Lucy Burns and Dora Lewis were transferred to the District Jail three days ago, in an attempt by authorities to break the spirit of the rebellion at Occoquan by removing its leaders. Both are currently undergoing the ordeal of force-feeding in the District Jail’s hospital ward. Hattie Kruger was also absent from the court. The judge immediately wanted to know why the three had not been produced as ordered. “They are too ill to be brought to court,” said Occoquan Superintendent Whittaker, and the Government attorneys agreed. But Dudley Field Malone and Matthew O’Brien, legal counsel for the prisoners, objected and said they would assume the responsibility for any risks involved in bringing their clients to court so they could testify.

Though still quite weakened by her ordeal, Dora Lewis did manage to get a written statement out to United Press today from the District Jail. She defended the National Woman’s Party’s picketing of President Wilson for his lack of action in regard to winning nationwide woman suffrage, and noted that fighting for democracy was not unpatriotic, nor a handicap to the war effort, and that there must be a constant campaign for suffrage until total victory is achieved:

“We are picketing because we want to make America a full and complete democracy as the first and surest step to our speedy victory. The devotion of American women has been amply attested in every war this country has fought. If service is to win us the vote, is there need for us to wait ? My son is in the Navy. There is no one more eager to help in the triumph of the cause of world democracy than I.

“When the war broke out, we were urged to give up our picketing and do war work. We would then be given suffrage at the war’s end, we were told. Susan B. Anthony, at the time of the Civil War, was told the same thing. She tried it. She gave up work for suffrage and waited. All her work before the war for suffrage was lost. The campaign had to be started all over again.”

Judge Waddill, a soft-spoken, older Southern gentleman, expressed great concern at the unchivalrous treatment of the women that was outlined in the court documents: “Here is a case concerning twenty-five or thirty ladies. The statement as to their treatment was bloodcurdling; it was shocking to man’s ideas of humanity if it is true.” He was also quite offended by the attempt of officials to keep three of the women from testifying in person, and ordered that all the prisoners be brought to court in the morning.

The issue of brutality will be dealt with tomorrow, but the issue to be litigated today was whether it was even legal for the prisoners to have been sent to Occoquan to begin with. Their “crime” (a totally false and minor charge of “blocking traffic” on the wide Pennsylvania Avenue sidewalk near the White House gates while they held up pro-suffrage / anti-Wilson banners) was an “offense” committed in the District of Columbia, and yet they were sent to a workhouse in Virginia. As Judge Waddill noted:

“These are not State prisoners; they are prisoners of the District of Columbia. They are held by an order of the court claiming to have jurisdiction in the District of Columbia. But they are imprisoned in the Eastern District of Virginia, in Occoquan Workhouse, which, very much to our regret, is down here, and is an institution that we alone have jurisdiction over. No court would fail to act when such a state of affairs as is set forth in this petition is brought to its attention.”

The original sentencing papers specified that the prisoners were to be sent to the Washington Asylum and Jail, commonly called the “District Jail.” Like any prison, it’s a tough, abysmal place, but its reputation is still far better than the infamous Occoquan Workhouse.

Warden Zinkham said that he had the authority to make such transfers based on a verbal order given him “five or six years ago.” Judge Waddill was stunned: “Do you really mean that the only authority you have on the part of the Commission of the District of Columbia to transfer parties down to Occoquan is a verbal order made five or six years ago ?” The warden then began having some memory problems. He recalled the original authorization in 1911 or 1912 quite clearly, but was unsure as to who gave him permission to transfer the suffrage prisoners on November 14th.

Warden Zinkham also had great difficulty explaining how he chose who would go to Occoquan and who would stay in the District Jail. He claimed that “humanitarian motives” usually guided him in his selections, and that he sent those who were the most fit for labor to the Workhouse.

Mr. Malone then asked the warden: “Were you actuated by humanitarian motives when you sent Mrs. Nolan, a woman of 73 years, to the Workhouse?” Zinkham had no response, so the question was asked, then unanswered for a second time. Finally, Malone asked Mary Nolan to stand up, and by the time the frail, white-haired woman got to her feet, the answer was so obvious that there was no need for the warden to respond.

Testimony will continue tomorrow, and since it should center on the treatment the suffrage prisoners have endured at Occoquan, it is expected to be quite graphic.