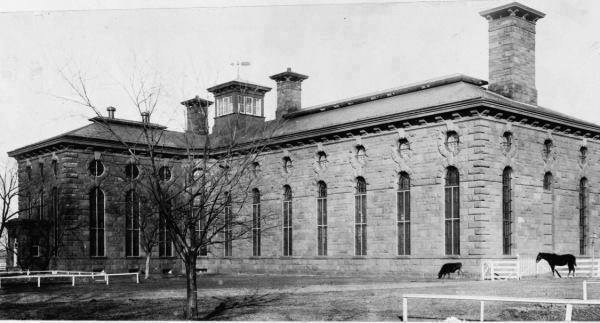 PHOTO: The Washington Asylum and Jail, commonly known as the “District Jail.”

November 25, 1917: The struggle of the imprisoned suffragists continues today in D.C.’s Washington Asylum and Jail, which most people around here simply call the “District Jail.” But now, instead of just a relatively small number of suffrage prisoners in his custody, Warden Zinkham must now deal with several dozen, nineteen of whom are hunger strikers. This is because U.S. District Court Judge Edmund Waddill ruled yesterday that all of those sent to serve their sentences in Virginia’s infamous Occoquan Workhouse had been transferred from the District Jail “without semblance of authority or legal process of any kind.”

Three of those who had been in Occoquan, and were in such poor condition that they would not likely survive further confinement in any institution, were released on parole. The rest were sent to the District Jail, where half of them continue to refuse all food. Five of those already there have been subject to force-feedings, with Alice Paul and Rose Winslow having undergone the procedure three times a day since November 8th.

Though no direct communication is allowed with any of the prisoners, details of their ordeals are becoming known to the public thanks to notes smuggled out of Occoquan and the District Jail, or passed when they were brought to court for a hearing yesterday and the day before.

The reasons for the transfer of Lucy Burns and Dora Lewis from Occoquan to the District Jail several days ago have always been clear. They were seen as “ringleaders” of the rebellion and hunger strike at the Workhouse, and were in danger of death from starvation, so Superintendent Whittaker had two good reasons for wanting them transferred out. What wasn’t known publicly until now were the graphic details of Lucy Burns’ force-feeding. As she wrote on one of several tiny scraps of paper that have now been made public by the National Woman’s Party:

“Wednesday, 12m. Yesterday afternoon at about four or five, Mrs. Lewis and I were asked to go to the operating room. Went there and found our clothes. Told we were to go to Washington. No reason as usual. When we were dressed, Dr. Gannon appeared, and said he wished to examine us. Both refused. Were dragged through the halls by force, our clothing partly removed by force, and we were examined, heart tested, blood pressure and pulse taken. Of course, such data was of no value after a struggle.

“Dr. Gannon told me then I must be fed. Was stretched out on bed, two doctors, matron and four prisoners present, Whittaker in hall. I was held down by five people at legs, arms and head. I refused to open mouth. Gannon pushed tube up left nostril. I turned and twisted my head all I could, but he managed to push it up. It hurts nose and throat very much and makes nose bleed freely. Tube drawn out covered with blood. Operation leaves one very sick. Food dumped directly into the stomach feels like ball of lead. Left nostril, throat and muscles of neck very sore all night. After this I was brought into the hospital in an ambulance. Mrs. Lewis and I placed in same room. Slept hardly at all.”

A secret diary kept by Elizabeth McShane in Occoquan has also come into the hands of the National Woman’s Party, and says in part:

“Now eight days on a hunger strike. Very weak and ill. Fainted yesterday afternoon in cell. Forcibly fed some hours later. Food poured into a vomiting stomach. Left in cell all night unattended. Fainted and was found at 5 o’clock on the stone floor.”

Members of the National Woman’s Party are engaging in what by American suffrage movement standards are “militant” tactics such as holding up large banners near the White House gates to highlight the hypocrisy of President Wilson vigorously promoting democracy around the world, while refusing to endorse or work for passage of the Susan B. Anthony (woman suffrage) Amendment. The amendment would bring democracy to millions of women in his own country by outlawing sex discrimination in regard to voting rights nationwide, and allow Congress, not the States, to enforce it. These “Silent Sentinels” are being arrested on false – and normally minor – charges of “blocking traffic” on the wide Pennsylvania Avenue sidewalk, and given lengthy sentences more appropriate to violent crimes.

The campaign for political equality continues by conventional means as well. Carrie Chapman Catt and other high-ranking officers of the National American Woman Suffrage Association are now arriving in this city, preparing to launch a new campaign to get Congress to pass the Anthony Amendment and send it to the States for ratification.

Having gone through what they have, the iron will of the imprisoned suffragists has been proven beyond any doubt, so now the only question is how long the prison authorities – and the Wilson Administration – will allow this battle to go on, and how much suffering they are determined to inflict on those who peacefully picket for something so basic to democracy as the right to vote.