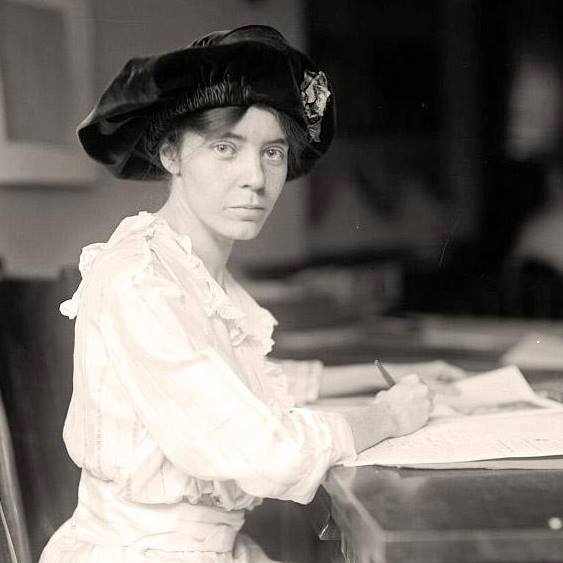 November 27, 1917: ALICE PAUL IS FREE! She and all other hunger-striking suffragists have been unconditionally and unexpectedly released from D.C.’s District Jail by Police Court Judge Alexander Mullowney, the same judge who had originally sentenced them. They had been serving terms of up to seven months on false and normally minor charges of “blocking traffic” on Pennsylvania Avenue’s wide sidewalk when they silently and peacefully picketed along the White House fence as a way of prodding President Wilson into using his influence to help get the Susan B. Anthony (woman suffrage) Amendment through a Congress controlled by his own party, and then sent to the States for ratification.

The first to emerge from the jail was Alice Paul, who was imprisoned on October 22nd, began a hunger strike on November 5th, and been force-fed three times a day since November 8th. Looking very pale and thin, she still summoned the strength to make this statement upon arrival at Cameron House, headquarters of the National Woman’s Party:

“We were put out of jail as we were put into jail, at the whim of the Government. They tried to terrorize and suppress us. They could not, and so freed us. The Administration has found that it not dare imprison American women for asking a share in the democracy for which we are fighting abroad. Our prisoners in Occoquan were released from that institution last Saturday on the court ruling that they were illegally and lawlessly confined.

“The action of the judge in commuting our sentence today acknowledges it was unjust, arbitrary, and a gross discrimination made in an attempt to suppress legitimate propaganda, an attempt which failed. Twenty-two of us are out, but nine are unjustly imprisoned. Those of us who hunger-struck were freed. The others were not. These, too, must be released before the Government’s conscience is clear.”

Since the releases were unconditional, no one had to pledge to stop picketing along the White House fence, where large banners held by the picketers often use his own words to highlight the contrast between President Wilson’s crusade to bring democracy to the world and his refusal to endorse or lobby for the Anthony Amendment, which would bring democracy to tens of millions of voteless women in his own country. When asked if she and other members of the National Woman’s Party would become “Silent Sentinels” again, Paul said it would depend upon circumstances:

“We hope that no more demonstrations will be necessary, that the amendment will run steadily on to passage and ratification, without further suffering. But what we do depends upon what the Administration does. We have one aim: The immediate passage of the Federal amendment. As for picketing, we are well pleased with what it has accomplished.”

The picketing along the White House fence began on January 10th, the day after a delegation of suffragists met with President Wilson. At that meeting he made the extraordinary claim that though he personally favored woman suffrage in principle, he could not endorse or lobby for the Anthony Amendment until instructed to do so by his party, then told the suffragists that they should work harder. His own Democratic Party, as well as the Republicans, endorsed woman suffrage on a State-by-State basis at their 1916 conventions, but neither party has yet endorsed achieving nationwide woman suffrage by amending the Federal Constitution.

Those who have engaged in the past ten months of protests have endured extreme cold, snow, heavy rain, hail, summer heat and humidity, criticism from more conservative suffragists, attacks by unruly mobs, arrests, and imprisonment. Some have served their time in the D.C. District Jail, while others were illegally sent to the infamous Occoquan Workhouse, in Virginia, where numerous abuses were inflicted upon them beginning with a night of terror when they arrived on the evening of November 14th.

Many of the imprisoned suffragists have gone on hunger strikes, and at least six (Alice Paul, Rose Winslow, Lucy Burns, Dora Lewis, Kate Heffelfinger and Elizabeth McShane) have been subjected to the ordeal of force-feeding. As the leader of the pickets, Alice Paul was singled out for extra punishment by being put into the District Jail’s psychopathic ward during part of her sentence. In addition to the force-feedings, her cell door was removed, her windows nailed shut, and she was only given mail that was severely critical of her.

The battle for the ballot is far from finished, but the struggle to decide whether the Wilson Administration or the National Woman’s Party has the greater determination is over, and suffrage forces have clearly won. What combination of the National Woman’s Party’s iron-willed militance and the National American Woman Suffrage Association’s traditional, but powerful political tactics will be needed to put the Anthony Amendment into the Constitution, and ban sex discrimination at the polls nationwide, is still to be determined. But we know today that there will be no shortage of the kind of courage and endurance needed to pursue the militant portion of the campaign.