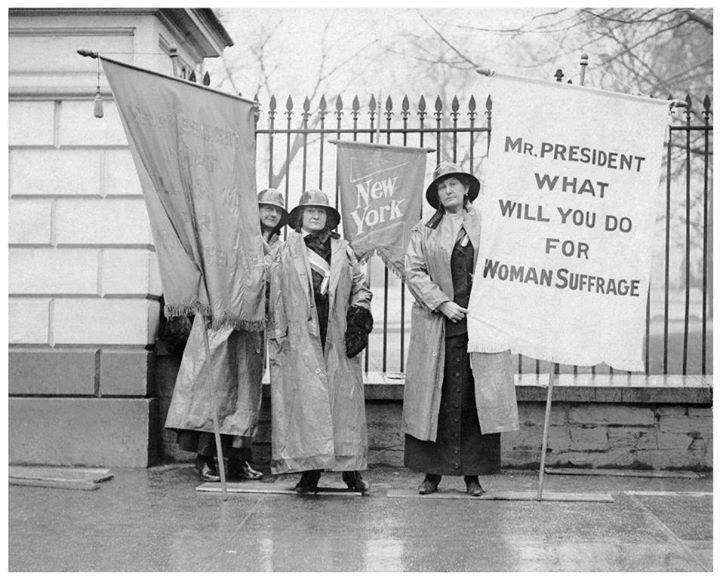 November 28, 1917: A second consecutive day of victory for the “Silent Sentinels” who have been picketing along the White House fence in favor of woman suffrage! The last of the imprisoned pickets had their sentences commuted today by the same judge who had originally imposed the outrageously long prison terms on them. Yesterday, Alice Paul and all those who were on hunger strikes were similarly freed without explanation, long before their terms expired, and today all remaining suffragist prisoners were released.

The attempt to stifle legitimate protest by jailing women whose banners asked such questions as, “Mr. President, What Will You Do For Woman Suffrage?” or “How Long Must Women Wait For Liberty?” or highlighted quotes from Wilson’s speeches about ” … the right of those who submit to authority to have a voice in their government …” backfired badly on the Administration.

In January, when the picketing began, it was treated as a novelty by the press and passersby. Even President Wilson himself seemed friendly, and unthreatened by the daily presence of the pickets along the White House fence. They and their large, colorful banners soon became a routine part of the Washington scene. But when America went to war in April, unruly crowds began gathering around – and sometimes attacking – the protesters to express hostility toward anyone who would criticize our wartime President. However, the protesters’ message had actually become more relevant than ever. If President Wilson believes democracy is something of such value that Americans should fight in faraway battlefields to bring it to the rest of the world, why wasn’t he doing anything to bring it to tens of millions of voteless women in his own country?

On June 22nd the arrests began, using the false and normally minor charge of “obstructing traffic” on the sidewalk to mask the real charge of “embarrassing the President” by showing his hypocrisy. Jail sentences began being handed down on June 27th. Over the summer, both the number of arrests each day and the length of the sentences increased. Finally, sentences totaling as long as seven months were given out. Some prisoners were sent to the Washington Asylum and Jail (commonly called the “District Jail”) and others were illegally transferred to Virginia’s Occoquan Workhouse, whose reputation as the worst and most abusive institution in the area is well-deserved, and has now been reinforced. Far from breaking their will, these measures only increased the pickets’ resolve.

Thanks to notes smuggled out, the public learned of the ordeals of the suffrage prisoners, from a night of terror for those who were brutalized upon arrival at Occoquan, to the force-feedings of Alice Paul and other hunger-strikers in the District Jail. The hunger strikers were especially effective, because the authorities were put in an impossible position. They could not be seen as allowing women to become martyrs to the cause by starving themselves to death, nor could they engage in mass force-feedings over extended periods of time in view of the nationwide revulsion over the procedure, and increasing sympathy for those made to undergo it.

Freedom arrived for the hunger strikers yesterday, apparently following an exchange of letters between Warden Zinkham of the District Jail and Police Court Judge Alexander Mullowney, who had originally sentenced the picketers. Today came proof that the jailing of picketers who were not hunger strikers had also become counterproductive, and a liability to everyone from the Wilson Administration on down, because all these peaceful protesters have now been unconditionally freed as well.

Tonight there is an air of victory at National Woman’s Party headquarters, though tempered by the absence of Dora Lewis and Rose Winslow, now in Sibley Hospital still recuperating from the effects of their hunger strikes and force-feedings. Whether the Wilson Administration and its supporters among the police, judiciary and jail authorities have permanently given up using repressive measures is unknown until the next time the suffrage pickets take up their posts along the White House fence. But Alice Paul said today that she and her fellow National Woman’s Party members are prepared to picket again whenever it seems necessary. So, the Administration knows it has a limited amount of time to do something meaningful for the Susan B. Anthony (woman suffrage) Amendment if it wants to avoid continued criticism by the “Silent Sentinels” and the possibility of finding itself in the same embarrassing, unwinnable position that caused its initial surrender yesterday.

All who favor political equality for women – and all who will attain the vote in the future after the Anthony Amendment has become part of the Constitution and bans sex discrimination in regard to voting rights – owe a great debt to this small band of determined women who have advanced the cause so far and so fast this year, so tonight’s celebration is hopefully just the first of many tributes.