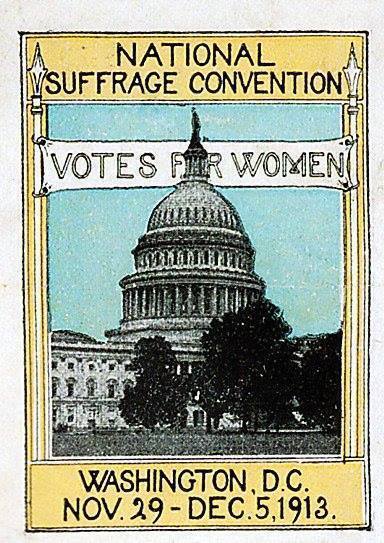 November 29, 1913: An atmosphere of optimism and great enthusiasm is greeting the delegates arriving for the 45th annual convention of the National American Woman Suffrage Association. The optimism is justified by the rapid progress woman suffrage has been making recently, and the enthusiasm is generated by the presence of many well-known and articulate advocates for our cause.

Huge suffrage marches here in Washington, D.C., on March 3rd and in New York City on May 3rd, have shown the movement to be a force to be reckoned with, and growing rapidly. The partial victory in Illinois in June, which now allows women to vote in Presidential elections and for local officials (though not yet for State offices) certainly adds to the growing influence of suffrage groups by marking the first meaningful gain for woman suffrage East of the Mississippi River.

According to Lucy Burns, one-fifth of the Senate, one-seventh of the House and one-sixth of Presidential Electors now come from the nine Western States where women have full suffrage, plus Illinois with Presidential suffrage. This is a sweeping change from just over three years ago when there were only four full-suffrage States (Wyoming, Utah, Colorado, and Idaho, the last of these victories having been won in 1896). But fourteen frustrating years without any expansion of woman suffrage finally ended with the victory in Washington State on November 8, 1910, and since then there have been four more States gained for equal suffrage: California in 1911, then Oregon, Arizona, and Kansas in 1912. So there have been more victories in the past three years than in all the decades of the struggle prior to 1910, and the entire West Coast is now full-suffrage territory!

Ambitious plans are underway at the convention, such as N.A.W.S.A. creating a National Suffrage Publishing Company to print its own literature, and the possibility of moving N.A.W.S.A.’s headquarters from New York to Washington, D.C., to help put pressure on Congress to pass the Susan B. Anthony (woman suffrage) Amendment to the U.S. Constitution. If ratified by 36 of the 48 States after passage by 2/3 of the U.S. House and Senate, it would permanently and explicitly ban sex discrimination at the polls nationwide.

Already accomplished is the creation of a “Men’s League for Woman Suffrage,” headed by Dr. Harvey W. Wiley, father of the Pure Food and Drug Act. Though several preliminary meetings and events took place today, the convention will be officially kicked off in a big way tomorrow with a mass meeting at the Columbia Theater, featuring speeches by Jane Addams and N.A.W.S.A.’s president, Reverend Anna Howard Shaw. So, there’s an exciting week ahead!