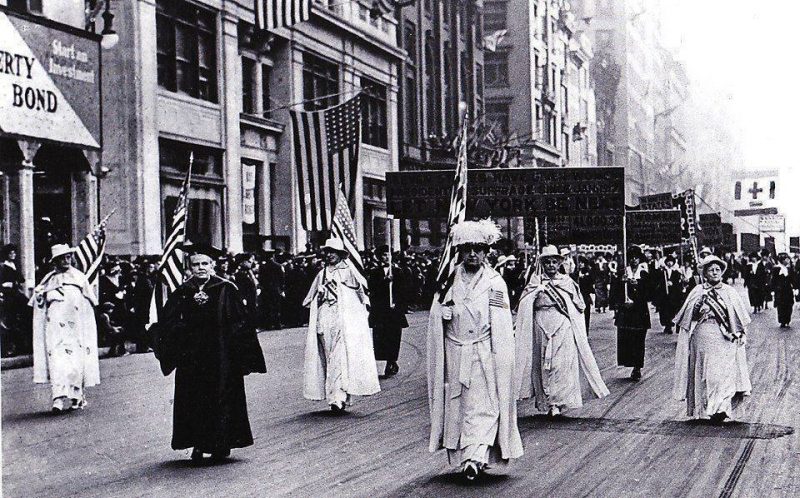 PHOTO: Carrie Chapman Catt, up front and near the center, and Reverend Anna Howard Shaw, in a black cap and gown to the left, as they led at least 20,000 marchers in a suffrage parade down Fifth Avenue a week ago.

November 3, 1917: It’s hard to believe it was just two years ago yesterday that the suffrage movement endured its worst setback, because our biggest victory may be just three days away! But twenty-four months of constant campaigning, unprecedented political organizing – and U.S. entry into the war – have changed everything. The biggest difference is that this year all efforts are focused on New York, as opposed to 1915 when it was necessary to simultaneously run what turned out to be unsuccessful campaigns in New Jersey, New York, Pennsylvania and Massachusetts.

In 1915 there was a major controversy over the claim that “a million New York women want the vote.” This year there could be no doubt, because petitions containing the names of 1,035,000 voting-age women who live in this State were prominently displayed in the massive suffrage parade on October 27th.

Though there was certainly some political organizing last time, this year’s campaign by the New York City branch of the Woman Suffrage Party, under the leadership of Mary Garrett Hay, put together a political machine that rivals Tammany Hall, with over 2,000 women precinct captains in New York City. Suffrage groups have distributed 18 million leaflets Statewide – house to house, dropped from the air, given out in fair booths, and on the street in open-air meetings. Speeches have been made in the largest as well as the smallest forums, and posters urging a “yes” vote are tacked up on every available space.

No town in the State held a parade this year without there being at least one suffrage float promoting the cause, and a week ago in New York City at least 20,000 marched for suffrage down Fifth Avenue. They were accompanied by 40 bands in a parade that took three hours to pass. Outside the city, 80 full-time organizers have fanned out around the State, and held 11,000 meetings from Albany, Syracuse, Rochester and Buffalo to the smallest hamlets, with no military camp or church overlooked as a potential speaking engagement.

Just the fact that the suffrage amendment is back on the ballot so soon is a tribute to the persistence and political power of the suffrage movement. Resubmission required the approval of two successive legislatures, and Vera Boarman Whitehouse, head of the New York State Woman Suffrage Party, deserves special praise for her skillful and tireless work in achieving this feat.

The great strength our movement is presently showing is even more remarkable considering how many suffragists are also engaged in war work. Once the U.S. went to war in April, members of the National American Woman Suffrage Association, under the leadership of Carrie Chapman Catt, and the Women’s Advisory Committee of the Council of National Defense, under Reverend Anna Howard Shaw, N.A.W.S.A.’s previous president, began encouraging and coordinating women’s defense work.

Though women’s war work has obviously taken time away from the suffrage struggle, it may actually help it, as more and more voting men are becoming aware of the contributions women are making to winning the war. They are also beginning to see that withholding the franchise from women is not just unfair, but an embarrassment to our democratic ideals and gives the impression that the nation is unappreciative of women’s efforts to preserve and promote democracy.

This evening more than 2,000 people packed a meeting at Durland’s Riding Academy on 66th Street to hear Reverend Shaw and other speakers talk of both patriotism and suffrage. After receiving a standing ovation when she took the stage, Shaw attacked an anti-suffrage leaflet entitled “Hugging A Delusion.” She noted that it was for preservation and expansion of democracy that the war is being fought:

“Are the men who are fighting in the trenches hugging a delusion? Are the mothers who send their sons to the front hugging s delusion? Oh, the shame of it! Enfranchisement! The symbol of free men!” She later declared that she was so confident of victory on Tuesday that she invited everyone to come to a celebration on election night at Cooper Union.

James W. Gerard, former U.S. Ambassador to Germany, began his portion of the program by praising women’s war work, and asking: “When have women ever failed to show the bravest spirit in the war?” He then went on to talk about the need for women to have a vote in order to win economic equality: “Women in industry do not receive the same wages as men. A girl in a box factory receives $4 a week, and if she wishes a pair of shoes she must go without meat and have only two meals a day.” The meeting had been preceded by an all-afternoon rally at Columbus Circle, which followed a parade led by two women carrying large American flags.

Though elections are always unpredictable, it seems quite unlikely that New York will follow the example of Maine. Local suffragists there rejected Carrie Chapman Catt’s advice and got a suffrage referendum on the ballot on September 10th. It was defeated by the male voters after a hurried, but intense campaign. New York’s campaign has been massive, well-organized, under way for two years, and will give the men of the nation’s most populous State a chance to show that they think their partners in the war effort deserve what the country says it’s fighting for: Democracy.