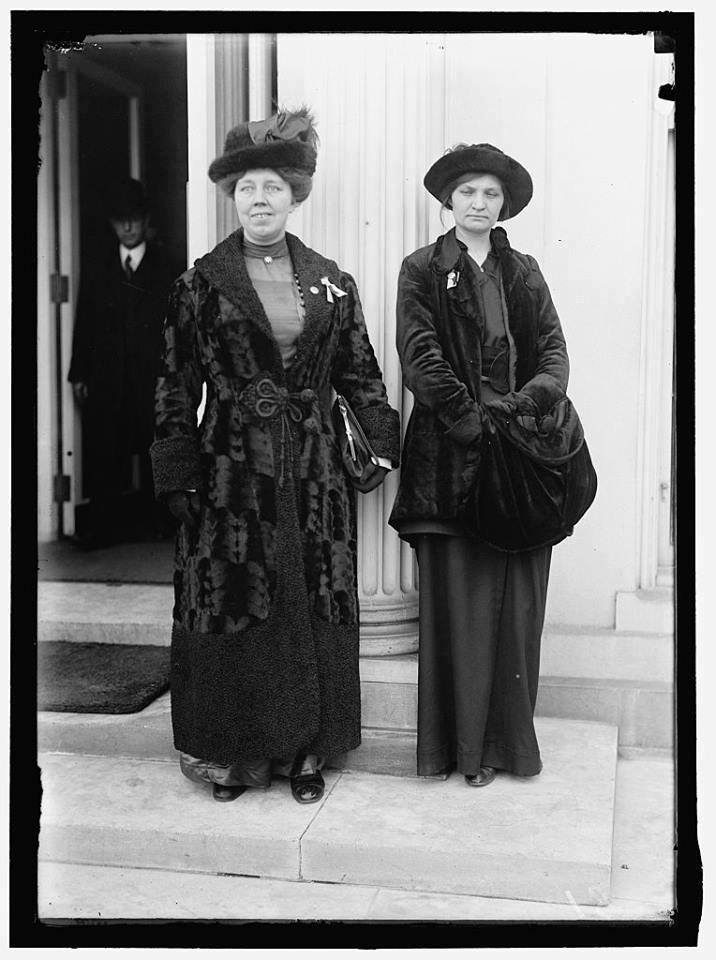 PHOTO: Two of today’s speakers at the N.A.W.S.A. convention. Margaret Hinchey is on the left, and Rose Winslow on the right.

November 30, 1913: Today’s session of the National American Woman Suffrage Association’s convention got off to a rousing start with the unfurling of a giant banner reading: “We Demand An Amendment To The United States Constitution Enfranchising Women.” This was immediately followed by thunderous applause, stirring speeches, and a reminder that winning the vote will not be the end of the fight for full equality and justice.

Margaret Hinchey, a laundry worker turned labor activist, told why she became a suffragist working as an organizer for the Woman Suffrage Party:

“People have often told me that the home is the place for women, but when that home is standing for 18 hours a day over a steam machine in a laundry, working one’s very soul out, and going home so tired that sleep was almost impossible, and getting every Saturday night the large salary of $3 a week it’s different. That’s what we had to do in New York before the laundry workers struck. It was then that I started to work for woman suffrage, and I shall never stop until i die.”

Hinchey then detailed the exploitation of children, some as young as 4, paid 5 cents to produce a gross of paper flowers, an operation that requires handling 2,000 articles to produce each batch of 144.

Rose Winslow, a former stocklng-weaver, also emphasized the connection between suffrage and better working conditions: ” … with the women given a chance in the making of laws, the laws will be made to give the girl workers the same chance that the men got.”

The first female State Senator in the U.S., Helen Ring Robinson of Colorado, echoed Winslow’s statement and looked past N.A.W.S.A.’s immediate goal by noting that the vote should be used for achieving other needed social reforms: “We want more than the ballot. If women were satisfied with just the ballot they would be unworthy of the ballot.”

Jane Addams explained why suffrage was so far a phenomenon of Western States: “The men realized just what part women had played in those terrible pioneer days, and realized that woman was just as important a part in the world as man. Then they gave her the ballot.”

The week-long gathering – the largest convention in the history of the suffrage movement – has attracted 600 credentialed delegates, plus about 400 more suffragists from around the country. Today’s mass meeting at the Columbia Theater also attracted a large number of police officers, several of whom came inside after the program began, and listened attentively. The convention will continue through December 5th.