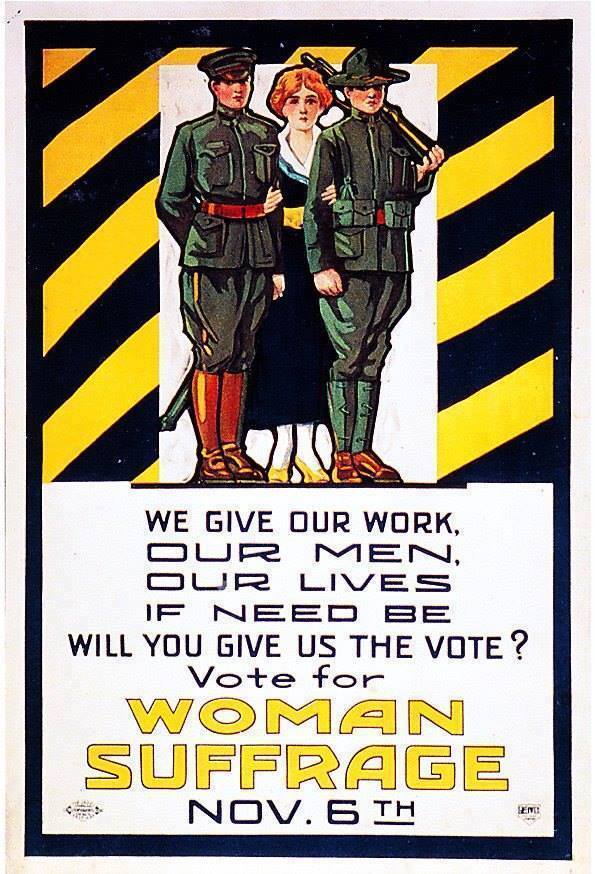 November 5, 1917: It’s nearly all over but the voting! Tonight, the final suffrage meetings and rallies are going on, and our leaders are making sure that the armies of volunteers who have been working almost non-stop through two successive campaigns are ready to shift gears overnight and work just as hard to assure a fair election, as well as make sure that every man in New York State who wants to vote for woman suffrage gets to the polls tomorrow.

The battle in the newspapers continues unabated, with paid advertisements by both sides, and free editorials by the papers themselves. The New York State Woman Suffrage Party has an ad in many papers today entitled: “To Win The War !” It notes that the Empire State is:

” … the largest, richest State, nearest and most vulnerable and desirable a prize for an invading enemy. Yet half the force of the State has been fighting with hands bound. The men and women who ask you to vote for woman suffrage are not suggesting it as a pretty compliment to womanhood. They ask it as a vital, sound, tremendous step in putting every ounce of power that can be marshaled behind our country in its time of need.”

President Wilson’s words of last week, “This is the time to vote for woman suffrage.” were also featured in the Woman Suffrage Party’s ad. It concluded by saying: “Your country needs not half but all her power! Without the vote, the women of New York cannot give their whole great fund of strength. Release the added power that has been held in check! To win the war, vote ‘Yes’ Tuesday!”

Carrie Chapman Catt, head of the National American Woman Suffrage Association, has taken a similar stance. She recently attacked the anti-suffragists for their failure to support our wartime President in his call for equal suffrage, which he supports on a State-by-State basis: “Is this the loyalty of which the ‘antis’ prate so much? Is this to hold up the hands of the President in the hour of his greatest need of a country united under his leadership ?” She reminds voters that: “To vote ‘Yes’ is to uphold the hands of the nation’s leader, who puts woman suffrage in the front rank as part of that democracy the world is fighting for.”

Unfortunately, The New York Times continues its long tradition of anti-suffrage editorials, concluding one published day before yesterday with this appeal to the State’s male voters: “The amendment should be rejected this year by a majority sufficiently emphatic to put an end to the agitation at least during the period when the minds of the people are preoccupied with the concerns of war.”

But other papers are quite supportive. The Middletown Daily Press was just one of many New York State papers that had praise for the suffrage effort, as it declared today:

“The suffragists have made a splendid campaign. They have lined up on their side all the leaders of thought and all the better element in politics in the State. If these forces are not sufficient to carry the day then one is moved to pity for the greatest State in the Union that, in this enlightened age, with such furor about democracy and the entire world at war for it, it can still register its stand-pat-ism and Tory-ism by turning down a proposition that will do more toward advancing real democracy than anything that has happened in years.”

Tonight, suffrage leaders from Syracuse to Manhattan are expressing no fears of defeat, and expect just the reverse of two years ago, when New York City gave an 87,755 vote advantage to the “antis.” This year there was an unprecedented level of house-to-house campaigning, and major unions worked zealously for suffrage. A number of women closely connected to Tammany Hall’s most powerful politicians were recruited into the New York City branch of the Woman Suffrage Party by Mary Garrett Hay, so the State’s biggest city is expected to provide a huge boost for suffrage tomorrow, instead of an insurmountable deficit.

Even at this late hour, the rallies are still going on in large cities and small, with the same intensity as if suffrage were trailing badly, because no one can say with absolute certainly that it isn’t. Vera Boarman Whitehouse will be at her desk in the New York Woman Suffrage Party’s headquarters tomorrow morning at 5:00, with leaders of all the other suffrage organizations at their posts soon afterward. They will be supervising the over 6,300 women who will either be poll-watchers inside the voting places or campaigning 100 feet outside them, plus some others transporting voters to the polls, because turnout is critical.

As the polls begin to close, there will be huge gatherings at each organization’s headquarters as the results come in. Then some time tomorrow evening, there will either be a two-years-overdue celebration of victory, or the launching of a campaign for a third New York State vote on woman suffrage.