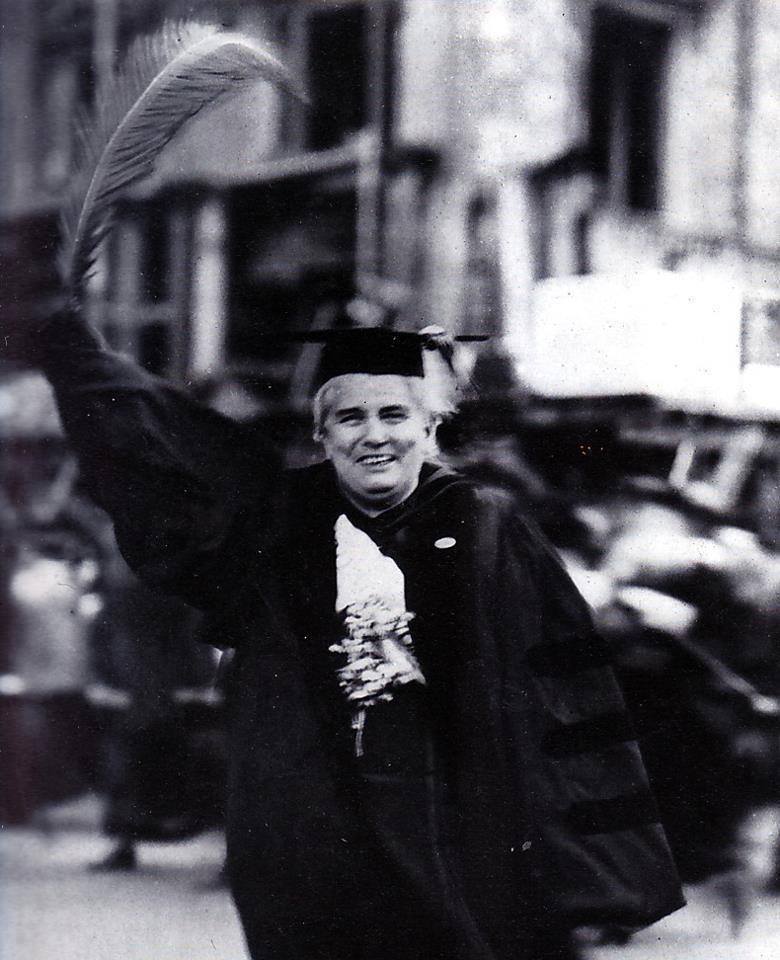 PHOTO: Reverend Anna Howard Shaw, president of the National American Woman Suffrage Association from 1904 until 1915, and an untiring worker in the New York State suffrage campaign this year.

November 7, 1917: Waking up today to headlines proving yesterday’s victory was not a dream, but a dream come true, the festive atmosphere that prevailed at suffrage offices last night resumed early this morning amid a run on “I Am A Voter” buttons at the headquarters of the National American Woman Suffrage Association by the newly enfranchised women of New York State. The joy remained undiminished late tonight at the largest – and possibly loudest – meeting ever held in Cooper Union.

But even with all of today’s celebrations, there was still time to sift through the returns from yesterday’s suffrage referendum, as well as make serious plans for the next step in the battle. The unprecedented organizing efforts in New York City paid off well. Two years ago, the men of the city voted against suffrage by an 82,755 vote margin, which would have sunk the 1915 campaign even if up-State voters hadn’t rejected the referendum by an even greater margin of 112,229 votes. But this year, the suffrage referendum appears to have broken about even in the rest of the State, while getting a 100,000 vote boost from New York City. This landslide endorsement of “Votes for Women” leaves no doubt about the outcome, even though a few results from rural areas are not in yet.

Our leaders have lost no time in gearing up for the next step, which will be to get Congress to pass, and 36 of the 48 States to ratify, the Susan B. Anthony Amendment, outlawing sex-based discrimination at the polls nationwide. The Executive Board of the New York State Woman Suffrage Party, and Mary Garrett Hay, head of its New York City branch, both sent telegrams to President Wilson this morning thanking him for his support. Carrie Chapman Catt, head of the National American Woman Suffrage Association, and Reverend Anna Howard Shaw, her immediate predecessor, have been invited by the President to bring a delegation of suffragists to the White House later this week for a meeting. Catt and Shaw are expected to use their audience with the President to try to convince him to add endorsement of the Anthony Amendment to his already expressed support for winning suffrage on a State-by-State basis.

Long-time suffrage advocate and former President Theodore Roosevelt expressed his happiness today at the results of yesterday’s election. According to Col. Roosevelt: “The women deserved it, they were entitled to it, and I am glad the voters saw it as they should. The vote for suffrage has grown wonderfully, and the vote of yesterday is an honor to every man who marked his ballot for women.” In addition to his other contributions to the campaign, he must have done some local lobbying, because the measure passed 272 to 70 at his polling place in Oyster Bay.

Every suffrage leader who took part in the campaign was at the Cooper Union victory jubilee tonight, but since the applause and cheering were virtually constant and unrestrained, it was often hard to hear the declarations of victory that we had been denied at the end of the first campaign in 1915.

Carrie Chapman Catt got the first deafening ovation when she opened the meeting by addressing the predominantly female crowd as “My fellow citizens …” Though there were many offices as well as other referenda on yesterday’s ballot, Catt noted the historic significance of the suffrage referendum, and why November 6th will long be remembered as a red-letter day for women:

“Mayors come and Mayors may go. A hundred years from now the deeds of the present-day Mayors will have been forgotten. But the children of the centuries to come will learn that on November 6, 1917, a great step for human freedom was accomplished in the State of New York. I want to give our heartfelt thanks to the men who voted for suffrage; and to those who voted ‘No’ I want to say that we won fairly and squarely. Be good sports now and accept us into the fraternity of democracy.”

Between Catt’s greeting and the singing of the “Star Spangled Banner,” which opened the rally, and the “Battle Hymn of the Republic,” which closed the program, there were many words of victory, but always mixed with rededication to the hard work that still remains.

Vera Boarman Whitehouse, head of the New York State Suffrage Party was one of many who said she had no intention of taking any time off: “People say to me, ‘Well now, I suppose you’re going to take a rest.’ But we shall never rest till every woman in the whole United States is enfranchised.”

Reflecting on the unsuccessful campaigns in three other States in the Fall of 1915, and alluding to the many suffragists now turning their attention to a Federal amendment, Whitehouse said: “We’re going to save Pennsylvania the trouble of another State campaign, and we’re going to save Massachusetts … and New Jersey …” At this point a member of the audience from the Buckeye State, where multiple suffrage referenda have failed, shouted: “Save Ohio, too, while you’re at it,” causing great laughter and applause.

A resolution was adopted by the audience to ” …renew our appeal to Congress to submit the Federal woman suffrage amendment to the legislatures of the several States in order that the suffrage campaign, stretching over a period of more than half a century, may be brought to a speedy close, thereby releasing the energies of the women of the nation from the struggle for political justice, so that with singleness of purpose we may work for worldwide democracy.”

Another resolution called for Reverend Shaw and Carrie Chapman Catt “… to carry to the President of the United States expressions of our gratitude for his assistance in the New York State woman suffrage campaign, and urge him to extend further aid to our cause by recommending in his annual message that the Federal amendment be submitted to the States.” A final resolution expressed thanks to the press for its valuable service, and hoped that it would give equally positive coverage to the campaign for nationwide suffrage.

Tonight’s final speaker was Reverend Anna Howard Shaw, who expressed the kind of unbounded optimism that is now becoming widespread in the aftermath of this landmark victory. She noted that back in 1906, when suffrage hadn’t won a victory in a decade, and only four States permitted women to vote, Susan B. Anthony, in her final days, predicted that the battle would be won by 1920. “That year will be the hundredth anniversary of Susan B. Anthony’s birth, and I hope we shall celebrate it by completing the triumph of democracy,” said Reverend Shaw.

With the kind of enthusiasm shown at the victory rally tonight, and the sort of political expertise demonstrated in the recent New York campaign, reaching Susan B. Anthony’s goal by 1920 now seems within reach.