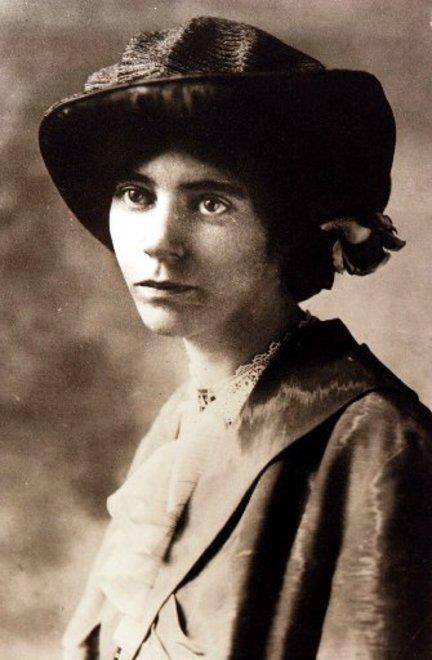 November 9, 1917: Today, Alice Paul was able to get her side of the story out about her continuing ordeal in D.C.’s District Jail. She’s in her 19th day of serving sentences totaling seven months imposed on her for peacefully picketing along the White House fence in favor of woman suffrage – and against President Wilson’s lack of support for our cause.

It has been learned that she was force-fed through a rubber tube three times in just 12 hours after authorities ended her 78-hour hunger strike yesterday. She is currently “under observation” and being threatened with being declared insane and confined indefinitely in an asylum if she doesn’t renounce the “militant” tactic of picketing for the right to vote, and end her attempts to get all imprisoned suffragists “political prisoner” status.

Paul was examined by five physicians yesterday, then taken to the prison’s psychopathic ward for a mental examination by Dr. Wright of St. Elizabeth’s, a local institution where those declared insane are committed. She was told that as the “ringleader” of the “disturbance” (the National Woman’s Party’s picketing of President Wilson) she’d be sent to St. Elizabeth’s if it wasn’t stopped.

Prison officials have been doing everything they can to make Paul as uncomfortable as possible. When she requested privacy, her door was removed. When she asked to have one of her windows opened, it was nailed shut. Her warm coat was confiscated, and she had a sleepless night due to the constant shrieks of the patients in the ward.

The prison physician and the warden have portrayed force-feeding as a relatively benign procedure in which Alice Paul and Rose Winslow voluntarily comply, making it as painless as possible. Dr Gannon said:

“There was no forced feeding. The women took the food without resistance and merely want to advertise themselves by saying they have been fed forcibly. Miss Paul’s condition is not critical; it is not even serious. She is doing well.”

Superintendent Zinkham admitted that the feedings were forced on the women, but claims that “they took it like little lambs.”

But the truth about what the suffrage prisoners are enduring still got out. “It’s a lie. I have resisted to the limit of my strength,” said Alice Paul. Helen Paul, who along with Agnes Morey manged to somehow get within shouting distance of the building where the psychiatric patients are kept, gave out the following statement on her sister’s behalf:

“Not for anything less than the full rights of political prisoners would I go through this. In making this demand we are fighting to secure honorable conditions for suffragists in jail, making it possible for them to live through their imprisonment, and we are protecting the rights of political offenders everywhere in the nation.”

It was also learned from others in the prison today that the groans and struggles of Rose Winslow were heard outside the room where the force-feedings are done, and that food has been seen splattered on the clothing of those who carry out this form of legalized torture.

Alva Belmont, leader of the National Woman’s Party’s New York branch, sent a telegram to President Wilson today protesting ” … the barbarous and inhuman treatment of Alice Paul and Rose Winslow and their comrades, now unjustly and illegally detained in the Washington jail.” She held the Wilson Administration responsible for what was happening to the suffrage prisoners, and said “persecution by the Administration is causing dangerous and popular revolt against the abandonment of democratic ideals to which you have pledged our nation.”

The struggle will go on, both in and out of prison. The National Woman’s Party will continue to picket the President until he lives up to his own frequently expressed ideals of worldwide democracy by endorsing the Susan B. Anthony Amendment, then lobbying his fellow Democrats, who control Congress, to pass it. After passage by 2/3 of both House and Senate, and ratification by 3/4 of the State Legislatures, it would bring democracy to millions of women in Wilson’s own country by permanently and explicitly outlawing sex bias at all polling places nationwide.