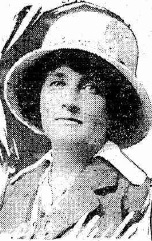 Paula O. Jakobi, a New Yorker, was an active suffragist and playwright. Paula Owen married Leo C. Jakobi, a manufacturer. They had two daughters, Audrey and Ruth. In 1904, Paula O. Jakobi was widowed after a long separation, when Leo died by suicide. She was active in the suffrage movement in New York City, where she wrote plays, including one about the Silent Sentinels who picketed the White House. Well-connected in the literary field, in 1914 she organized an “Authors Evening” where authors gave readings and books were auctioned. In attendance were Lincoln Steffens, Zona Gale, Edna Ferber and many other pro-suffrage authors.[1] She also studied prison reform at the Massachusetts women’s reformatory in Framingham, and wrote about destitute women. For three years she was the opera critic for a New York newspaper. She was a member of Heterodoxy, a Greenwich Village feminist discussion and debate group. With its founder, Jakobi wrote a satirical one-act play, “Telling the Truth at the White House” (1917), based on suffrage protests in Washington D. C., not knowing that she would later be among those arrested.[2]

Her arrest came in 1917 when she was among the 41 pickets who protested the imprisonment of Alice Paul. On November 10, 1917, she was in the first of five groups of banner-carrying suffragists who went the White House. They were arrested immediately. Tried on November 12 and when released pending judicial decision, promptly went back to the picket line later that same day. Arrested and tried again on November 14, she and the other suffragists were sentenced from 30 to 60 days at the notorious Occoquan Workhouse at the D.C. Prison complex in Lorton, Va. There she experienced the “Night of Terror” and her vivid account of the experience provides many of the details we know about that horrible night.

When they arrived at the Occoquan Workhouse, the women waited for Superintendent Whittaker to arrive to demand to be treated as political prisoners. But when he showed up, the women were attacked, beaten and dragged to a distant building. She writes that Dorothy Day’s arm was through the arm of Jakobi’s handbag, and the male guards pulled them in opposite directions until the string of the bag broke. Two men then dragged Jakobi away. Dorothy Day’s back was smashed over the back of a chair. When she cried out to Jakobi for help, Jakobi could do nothing as she was in the tight grip of the two men.

According to Jakobi, “I didn’t know at the time what happened to the other women. I only knew that it was hell let loose with Whittaker as the instigator of the horror. In the ante-chamber to the cells, some of the guards were standing, swinging night sticks in a menacing manner. We were thrust into cells; the ventilators were closed. The cells were bitter cold. There was an open toilet in the corner of the cell, which was flushed from the outside. We had to call to a guard who had previously attacked us to flush them. The doors were barred, there were no windows … there was no light in the room, only one in the corridor… The floors were filthy, as were the blankets.”

“In the morning, we were roughly told to get up. . . .Faint, ill, exhausted, we were ordered before the superintendent … Whittaker asked my name; then whether I would go the Workhouse and obey prison regulations and be under the care of the ladies. I told him I would not. . . I demanded the rights of a political prisoner. He interrupted me with ‘Then you’ll go the male hospital’—he emphasized ‘male’—‘and be in solitary confinement. Do you change your mind?’ I said ‘no,’ and was taken to the hospital by a trusty.”

Jakobi fasted in protest of her treatment and was continually offered food, including fried chicken and salad. Her account goes on to report forced feedings at the prison. She recounts repeated attempts by Whittaker to get the women to stop their hunger strike, and to work and voluntarily obey the prison staff. This was always refused by the strong determined women. Jakobi showed her resourcefulness while at the Workhouse, hiding pencil stubs in her pillow and even in the hem of the window shade. The women also sent messages by tapping on the steampipe running through the walls. [3]

All of the suffragists were eventually released by a writ of habeas corpus in late November, 1917.