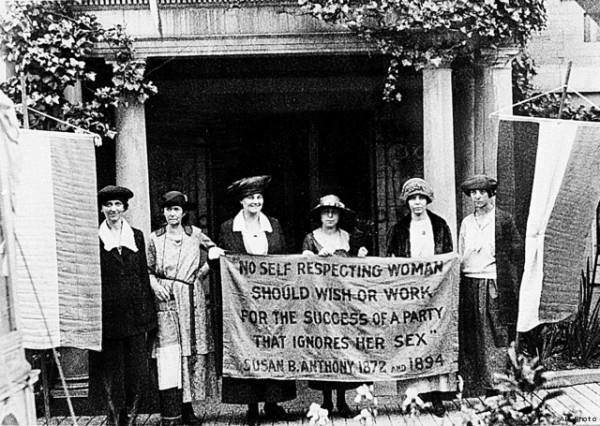 PHOTO: National Woman’s Party members (Alice Paul second from the right) standing in front of their headquarters three months ago, just prior to going to protest at the Republican Convention, with a banner that clearly has permanent relevance: ” ‘No self respecting woman should wish or work for the success of a party that ignores her sex.’ Susan B. Anthony 1872 and 1894.”

September 10, 1920: The National Woman’s Party will battle on ! Though originally created for the purpose of putting the Susan B. Anthony (now the 19th) Amendment into the U.S. Constitution, there was a consensus among Executive Committee members today that because this recent victory for woman suffrage will not automatically cause all discriminations and barriers against women to fall, the party must now evolve from an equal suffrage organization to one whose goal is nothing less than full and totally equal rights and opportunities for women in all areas of human endeavor.

As Alice Paul explained it: “It is incredible to me that any woman should consider the fight for full equality won. It has just begun. There is hardly a field, economic or political, in which the natural and accustomed policy is not to ignore women. Men are chosen to fill high Government offices and the responsible, well-paid positions in industry. No comment was excited by the fact that no woman was a member of the Coal Commission, for instance, or the Railway Wage Board, in whose hands lay matters of vital concern to women as housekeepers and as workers. Unless women are prepared to fight politically they must be content to be ignored politically.”

Though becoming an official political party with its own women candidates had been discussed, Abby Scott Baker indicated that most board members thought it would be better to continue with the policy that had been so successful for the party during the suffrage struggle. So in this post-suffrage era, the National Woman’s Party will use its influence to help established party candidates who support its goals and to oppose those who do not. Baker urged women to enter politics, but to beware of being relegated to the lowest rungs of the ladder:

“You may be sure that it will be some time before they are allowed to speak up in meetings in the inner party councils. Politicians are bargain hunters, and they are not bidding very high for the women’s vote. If I have learned anything from my political experience, it is that the one thing politicians fear is a determined minority united on a program, and ready to throw its power to the group through which it can secure that program’s success. This is the policy through which the Woman’s Party won national suffrage within seven years. By following this policy, the Woman’s Party could win success for the larger problems still before women.”

Alva Belmont, who hosted today’s gathering at her Long Island home, gave an example of a problem that winning suffrage did not solve, but using women’s votes as a political tool could fix:

“With such an active, fighting women’s group in the political field, it would be impossible for women to be deprived of their citizenship through marriage or to be given citizenship because of marriage. A woman should have the right of separate domicile, so that she cannot be disenfranchised, as thousands of women now are because their residence is fixed by that of their husbands.” (This is not just a theoretical issue to her, because her daughter recently lost her American citizenship when she married the Duke of Marlborough in England.)

The date of the party’s upcoming national convention is uncertain, because there is still some “unfinished business” to deal with in regard to suffrage. Anti-suffragists have launched multiple legal offensives in the courts trying to invalidate ratification of the 19th Amendment, or at least block its implementation until after the Presidential election in November. The National Woman’s Party’s highest priority is defending and implementing the amendment, so it is helping fight the court suits as well as working for ratification in Connecticut. The major controversy over whether the 19th Amendment was legally ratified involves Tennessee, which on August 18th became the 36th and final State needed for ratification. But if Connecticut ratifies before the election it would make Tennessee’s contested status irrelevant.

Fortunately, one major impediment to the National Woman’s Party’s ambitious plans has been eliminated. Dora Lewis announced at the Executive Committee meeting that the $12,000 debt run up during the final days of the suffrage campaign has been paid in full, thanks to vigorous efforts to collect on previous pledges, plus new contributions, the largest of which was $1,000 from Alva Belmont.

So, debt-free and with an historic victory behind it, the National Woman’s Party can now move on toward a goal of absolute equality for women. With the votes of millions of newly-enfranchised women added to the party’s years of political experience, and the high level of dedication to the cause shown by its members, achievement of that new goal now seems possible in the not too distant future.