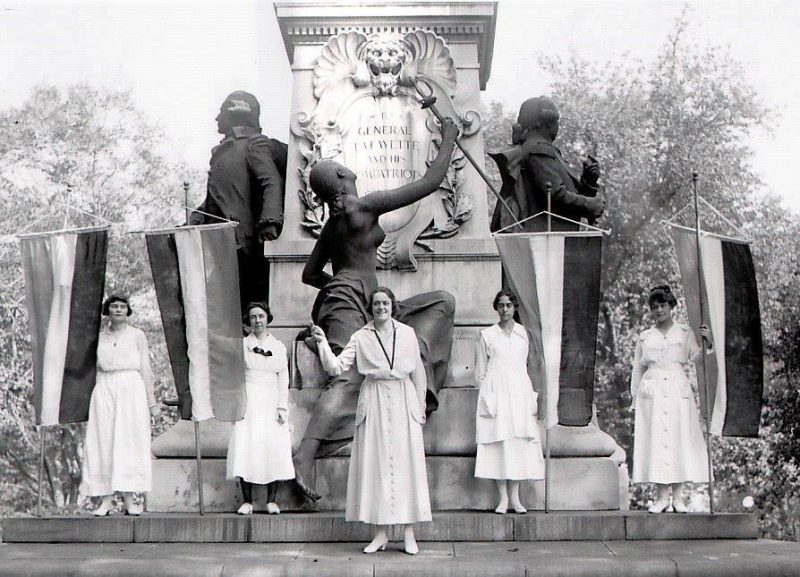 September 16, 1918: This has been a great day for “the cause” as both an older, traditional suffrage group and our movement’s newest, most militant faction each held successful high-profile events to help get the Susan B. Anthony (woman suffrage) Amendment through Congress and sent to the States for ratification.

The day’s events began when some National American Woman Suffrage Association members who are voters in suffrage States had a friendly meeting with President Wilson at the White House. Those in the delegation lavishly praised his words of support for woman suffrage.

Two hours later, the National Woman’s Party got a transcript of Wilson’s statement, and as a way of emphasizing that mere words will not be enough to get his fellow Democrats to stop blocking passage of the Anthony Amendment in the Senate, the protesters set fire to a copy of his statement while holding a demonstration at the Lafayette Monument just across from the White House.

Those in the N.A.W.S.A. delegation that had the 15-minute visit with the President were quick to praise him. According to Minnie Fisher Cunningham of Texas:

“The President is a wonderful listener. He gives the closest attention to the matter presented and you have his entire interest for the period of the interview. This is real democracy – to be able to get to the head of the nation with the problems of the people.”

Wilson told the delegation: “I am, as I think you know, heartily in sympathy with you. I have endeavored to assist you in every way in my power, and I shall continue to do so. I will do all I can to urge the passage of this amendment by an early vote.”

That sounds great, but words are not the equivalent of deeds, and the National Woman’s Party was far from satisfied. After forty N.W.P. members marched from party headquarters to Lafayette’s statue, with their tricolor banners raised high, Lucy Branham held aloft a flaming torch and said: “We want action.” Then, as she set a copy of the President’s statement alight, she proclaimed:

“The torch which I hold symbolizes the burning indignation of women who for a hundred years have been given words without action. In the Spring our hopes were raised by words much like these from President Wilson, yet they were permitted to be followed by a filibuster against our amendment on the part of Democratic Senate leaders. Today the Chairman of the Rules Committee of the Senate, a spokesman for the Administration, announced that he would not even call the Suffrage Committee together to consider taking a vote. This session is nearing its close and the President and his party refuse to take any effective step toward the passage of the suffrage measure.

“As in ancient fights for liberty the crusaders for freedom symbolized their protest against those responsible for injustice by consigning their hollow phrases to the flames, so we, on behalf of thousands of suffragists, in the same way today protest against the action of the President and his party in delaying the liberation of American women. For five years women have appealed to this President and his party for political freedom. The President has given words, and words, and words. Today women receive more words. We announce to the President and the whole world today, by this act of ours, our determination that words shall no longer be the only reply given to American women – our determination that this same democracy, for whose establishment abroad we are making the utmost sacrifices, shall also prevail at home.”

Today’s demonstration – though the first in which they’ve used fire – is just the latest in a long series of militant protests against President Wilson by the National Woman’s Party since January 10th of last year.

After a meeting the night before with a large delegation of suffragists, in which Wilson expressed sympathy for the cause, but unwillingness and an alleged inability to endorse the Anthony Amendment or use his considerable influence to get it through Congress until the Democratic Party instructs him to do so, the N.W.P. began stationing “Silent Sentinels” along the White House fence near the gates. The words on their large, colorful banners highlighted the hypocrisy of Wilson’s vigorously campaigning for democracy around the world while doing nothing to bring it to the female half of his own country. The Sentinels first braved extreme cold and heavy snow, then Spring rains, mid-summer heat and humidity, attacks by mobs angry at anyone who would criticize a President in wartime, and finally arrests and prison sentences, including time at the infamous Occoquan Workhouse, as well as hunger strikes and three-a-day force-feedings of some prisoners such as Alice Paul and Lucy Burns.

As recently as August 12th and 14th there were mass arrests, with injuries, and demonstrators sent to Occoquan for making peaceful protests over the failure of the Senate to vote on the Anthony Amendment. As Alice Paul said at the time: “We will continue to protest so long as our disenfranchisement exists. Oppression and abuse at the hands of the law merely emphasized the great need of women for political power.” On August 20th, twenty-three suffrage prisoners were released after a six-day hunger strike.

Older, more traditional suffragists have denounced the actions of the militants as allegedly hurting the cause by alienating undecided male voters in States where suffrage referenda are on the ballot, as well as offending politicians who favor suffrage, but oppose using militant methods to bring it about and feel uncomfortable about being linked to the protesters in the minds of some.

Militants complain that the older, more conservative suffragists are too friendly and deferential toward those who have the power to get the Anthony Amendment quickly passed by Congress but don’t use their power to do it, and that the State-by-State campaigns will take far too long to win suffrage nationwide. But this combination of opposite approaches actually seems to be quite effective in advancing the Anthony Amendment. Even President Wilson finally endorsed it on January 9th of this year, a year to the day after the unsatisfactory meeting with the suffragists that caused the picketing. So, “more of the same” by both factions should produce the result that all suffragists desire: an end to State laws that restrict voting to males only.