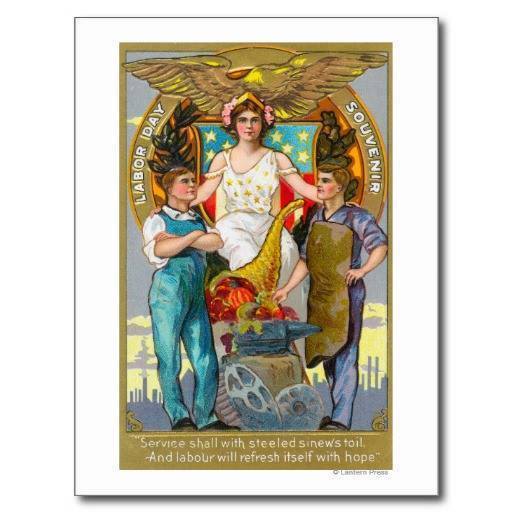 September 5, 1910: In a very encouraging sign, a majority of the approximately 71,000 marchers in New York City’s Labor Day Parade this afternoon were women. The participants used the occasion to celebrate a recent victory by shirtwaist workers, as well as show solidarity with striking cloakmakers who are now being prohibited from picketing by New York Supreme Court Justice John Goff.

Despite turning out to be one of the hottest days of summer, there were few dropouts of either sex, though the women seemed to hold up better than the men during the four-and-a-half hour parade down Fifth Avenue from 59th Street to Washington Square.

There were far too many bands to count, and colorful banners were everywhere. Most of the banners were in support of the cloakmakers who have been on strike since mid-June, and in opposition to Justice Goff’s recent ruling against their right to picket their employer. Some examples: “Goff’s injunctions can never break labor’s solidarity”; “The bosses’ latest masterpiece – Goff”; “We appeal from Goff’s court to the court of the people.” The most popular was “O Goff, Come Off,” written in seven different languages. One of the largest banners read: “Plutocracy steals our soap and then calls us the great unwashed.”

The record number of marchers this year is due to the work of the International Ladies Garment Workers Union and the Women’s Trade Union League. Helen Marot, Lenora O’Reilly, Rose Schneiderman and Clara Lemlich all marched at the head of large delegations.

The hard-fought but successful strike against the shirtwaist companies has induced many to join the labor movement in order to win concessions from their employers similar to what shirtwaist workers got earlier this year. Among other benefits, unionized shirtwaist employees now have a 52-hour week instead of 65, no longer need to pay for any of the tools necessary for their work, and will get four paid holidays a year.

The sympathy the shirtwaist workers gained during the strike due to public outrage over their arrests and the brutal attacks on them by company thugs is still present. All along Fifth Avenue these marchers were applauded by spectators, and when they passed by many of the mansions of their newfound wealthy women supporters, the outsides of their homes were decorated for the occasion.

Following the parade, a number of women went to the office of the Women’s Trade Union League, where they were served tea and sandwiches.

Though there is still a lot of work to be done in regard to better wages, workplace safety, and recruiting more members into unions, a day to celebrate recent gains was definitely earned, and clearly enjoyed by all who participated.