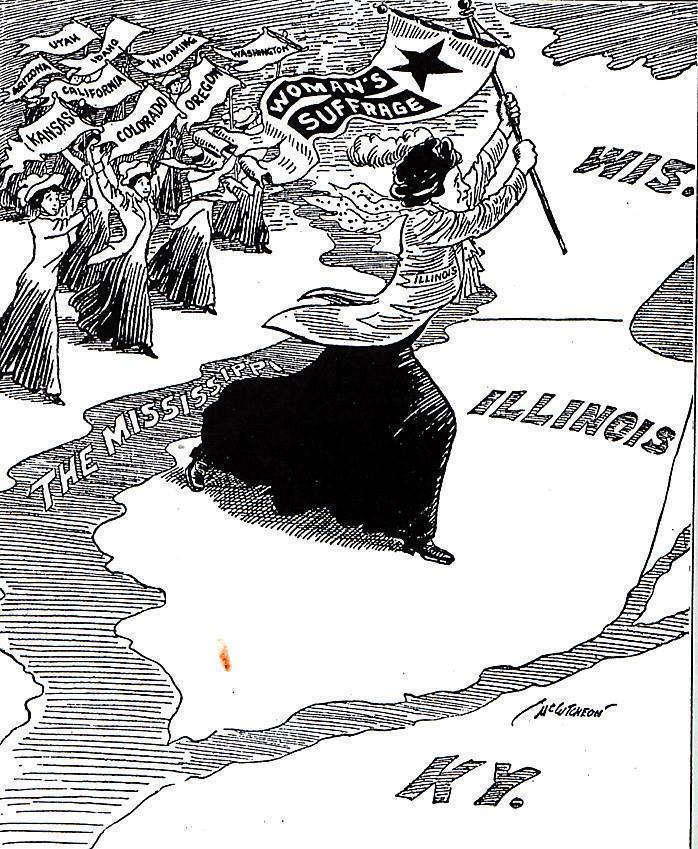 CARTOON: A celebration of a partial victory in Illinois seven years ago, when women won the right to vote for President and local offices, though not State offices. That was the first time any State East of the Mississippi River had approved even Presidential suffrage, so it was a major win. Now, by virtue of the 19th Amendment, neither Illinois nor any other State can deny or restrict anyone’s voting rights on account of sex.

September 6, 1920: Eleven days after the 19th Amendment was proclaimed as a part of the U.S. Constitution by the Secretary of State, the process of dismantling the political machine that had been needed to bring about the winning of the woman suffrage amendment is proceeding well. In one example, Grace Wilbur Trout announced today that the Illinois Suffrage Association, founded in 1869, would disband at its final convention on October 7th, having accomplished its purpose. Trout is already quite active in the League of Women Voters, which will be the successor to the National American Woman Suffrage Association, and she was in charge of the L.W.V.’s national convention in Chicago in February.

Hopefully, Trout’s confidence will be justified, because the “antis” are working just as hard now to challenge the 19th Amendment’s validity and postpone its implementation as they did to try to stop its ratification. Three days ago the Tennessee House forced the pro-suffrage Governor of Tennessee to forward to the U.S. Secretary of State a copy of a resolution in which the House took back its ratification vote. The Governor did not sign anything implying that the resolution was valid, and only certified that it was a true copy of the proceedings as recorded in the House Journal. But that same day, Tennessee Attorney General Thompson sent a telegram to Carrie Chapman Catt reassuring her that: “Nothing done in either branch of the General Assembly has amended the ratification and certification by the Governor to the Secretary of State of the Nineteenth Amendment upon which its proclamation was issued, nor can either branch of the Assembly, the Governor or Secretary affect it.”

Opponents have a four-part strategy, but have already received a setback in regard to one attempt. Their primary focus is to challenge the legality of the ratification process, and get the courts to declare that the 19th Amendment is invalid because it was not properly ratified. But the Chief Justice of the D.C. Court of Appeals has refused to immediately certify their case for appeal to the U.S. Supreme Court. Now they’re waiting for the entire D.C. Court of Appeals to convene on October 4th so it can rule on the merits of their case, and then they’ll try to get it to the U.S. Supreme Court as quickly as possible for a final ruling.

Meanwhile, suffrage opponents will be in Nashville challenging Tennessee’s ratification when the Tennessee Supreme Court convenes on September 20th. They will also try to use the courts to prohibit election officials from letting women in non-suffrage States vote until after all the court cases have been decided. Finally, they will ask a State Attorney General friendly to their cause in a State where women could not vote prior to the 19th Amendment’s ratification to file a case challenging its validity. This would be the fastest route to the Supreme Court.

But Carrie Chapman Catt is not worried:

“Women have the right to register to vote in all States under the Nineteenth Amendment to the Federal Constitution. The Federal amendment is ratified, all anti-suffragists to the contrary notwithstanding …. If any State authority denies her that privilege it is her right to demand it in the courts. It is possible for a thief to declare that a diamond ring is his because it is in his possession. It is sometimes necessary for the owner to prove his right of ownership in the court. This is a parallel now with the women’s vote. No honorable State will deny it to women.”

Catt noted that former President Taft had something to say recently about those who may try to keep women from voting:

“Election officers of the State who impede or deny her right to vote expose themselves to prosecution under statutes, whether Federal or State enacted, to protect citizens in their lawful right to vote. It may well be that the doubling of the number of voters in every State by this amendment will require for the convenience of voters amendment to the election laws of the States, but such inconveniences cannot be made an excuse for preventing women from exercising the franchise.”

So, the battle is still being fought, both on a Federal and State level. In Mississippi, the law states that all voters must register four months before the election, and there does not appear to be any move to approve special legislation to allow women to register after that date, even though they were still prohibited from registering there on July 2nd. In Georgia, the State Attorney General thinks women don’t even need to register in order to vote, but local officials strongly disagree and are preventing women from doing so because that State’s registration deadline also passed before the 19th Amendment was ratified. But though suffrage may be delayed for a while in two States, it looks as if women will be voting for all offices and in great numbers in the other 46 States this year, and that’s a major improvement over the 15 States where they had full suffrage just a few weeks ago.