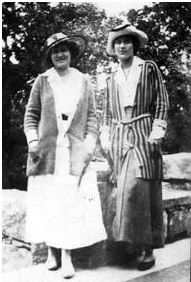 Vida Milholland contributed far more to gaining suffrage for American women than has been recognized. During her childhood, when she was called “Tubby”, she joined her more famous sister Inez in many activities, and at Vassar she joined Inez as a co-conspirator with Inez against the college’s anti-feminist President James Taylor, and in preeminence in sports and theater. Inez played the part of Romeo in Romeo and Juliet and was widely viewed as a romantic figure by her peers.

In 1916, Vida sold some valuable jewelry she had been given in order to help finance the ill-fated whistle-stop train trip across a dozen states that she and Inez took to campaign against Woodrow Wilson. She helped Inez continue the grueling tour even though it was clear Inez was seriously ill. Finally, she stood vigil by her sister’s bedside in Los Angeles until their father and Inez’s husband could come west.

After Inez’s death, Vida gave up her singing career and threw herself into suffrage work. She had a fine voice and sang at suffrage meetings. She joined the picketing of the White House. One of the most common banners one sees in photos is one showing the last words of Inez before she collapsed in Los Angeles: “How Long, Mr. President, Must Women Wait for Liberty.” Vida was one of the first to be arrested for picketing, on July 4, 1917. She served three days in the District of Columbia Jail, during which time she sang every night for the benefit of her fellow prisoners.

In 1919 she toured the United States as part of the “Prison Special” tour of NWP speakers and sang at all the meetings.

Vida Milholland was the younger daughter of John E. Milholland and his wife Jeanne Torrey. Their third child was a son, John Angus (“Jack”) Milholland, who attended Harvard College, Class of 1914.

After suffrage was won in 1920, Vida worked on peace issues with the Women’s International League for Peace and Freedom. She had a partner in this work, Peg Hamilton. With other well-known female couples, they were an early lobbying group not only for peace but for same-sex partnerships.

After her father died, she actively managed the family estate in Lewis, NY. She lived with Hamilton in Lewis into her old age, and died in 1952, three years after her brother, survived by a distraught Hamilton.

Her father made a fortune while his children were young, but he lost it soon after World War I, partly because of ill-advised criticism of the Wilson Administration from which he was seeking contracts. Vida struggled to keep up the property upstate and sold off much of it to a well-regarded music school.