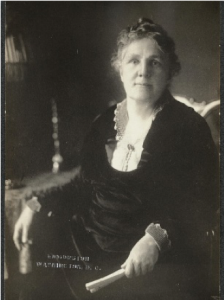 In 1851 Sophie Gooding Rose was born in New Bedford, Massachusetts to John Rose from Talbot County, Maryland and Sophia Gooding Barker from New Bedford, Massachusetts. When her father died, her mother left their home in Baltimore and returned with two year old Sophie and her infant sister Kate to New Bedford. Sophie’s maternal grandfather, Abraham Barker, (1788-1871), a Quaker, was a prominent businessman and banker there.  Sophie spent most of her childhood in the North schooled in the Quaker values of equality and peace.

At fifteen after the Civil War, Sophie returned to Baltimore when her mother married John Orem. Ten years later, in 1877, Sophie married Charles Vivian Meredith (1850 -1930), a distinguished lawyer, who was from an old, respected Virginia family. Charles’ father, Judge John Alexander Meredith along with the Mayor of Richmond, surrendered the city to the Union Troops in 1865. Sophie and Charles lived in Richmond and raised three children: Kate Rose b. 1878, Sophie Rose b. 1880, Sarah Bernard b. 1882 who died in infancy and Bernard b.1892.

In 1909 Meredith and other wealthy female activists founded the Equal Suffrage League of Virginia. She was one of the vice presidents and chaired several committees. She helped organize suffrage rallies in Richmond.  A frequently published photograph shows her sitting on the speakers’ podium at a rally in front of the Capital in Richmond in 1914.

After several years Meredith realized that the Virginian legislators would never pass a state suffrage amendment. She joined allegiances with Alice Paul, also a Quaker, because Paul had just established the Congressional Union (CU) to focus on getting a federal suffrage amendment passed. Paul used parades and civil disobedience such as picketing and hunger strikes to garner attention and get support. 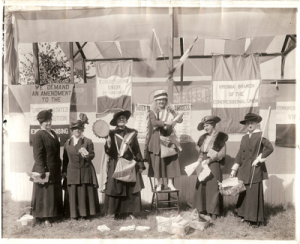 Sophie Meredith (2nd from left) with Virginia Branch of the Congressional Union attract attention at Virginia State Fair in Richmond.

In 1915 Meredith established the Virginia Branch of CU. This was a bold move because it went against the southern patriarchy’s wish to have local control over who votes. Some of her friends criticized her and her health suffered. One of Meredith’s followers called her “our frail but fearless leader.”  Meredith held most of the CU meetings in her home and arranged for Paul and other national figures to speak in Richmond. She led countless delegations to lobby Virginian legislators and then reported to Paul about their positions on suffrage. 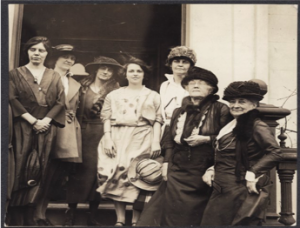 In 1917 Meredith led her CU members from Virginia to take their turns picketing in front of the White House. In August 1918, at age sixty-seven, Meredith was arrested four times for demonstrating in Lafayette Park against the Senate’s refusal to vote on the suffrage amendment. There is no record of her going to prison. Her family urged her to pay the fine instead of going to jail because they were afraid that she might die because of her poor health. Her daughter Posie wrote to her: “It is better to be a live suffragist than a dead one.” 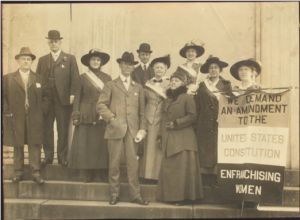 In 1915 Sophie Meredith (front center) led delegation to lobby US Senators from Virginia.

After suffrage was passed in 1920, Meredith continued to work closely with Paul on getting a Federal Equal Rights Amendment passed. She was one of the women who seconded the motion when Paul introduced it to her NWP members in Seneca Falls in 1923. Meredith was on Paul’s advisory board of the National Woman’s Party and continued to be president of the Virginia branch until her death in 1928.

Three months before she died, Meredith wrote Paul a letter updating her on the Virginia state legislators’ continued lack of support for laws that would assure women’s equality. Meredith said that while she did not expect they would ever pass any, she knew it was important to keep the issue in front of the legislators each year.

Meredith died on August 27, 1928 at age seventy-seven.  Her photograph along with the headline “Feminist Leader Whose Death on August 27 is Mourned by Women” was on the front page of Equal Rights which was the NWP’s newsletter (September 22, 1928).The article stated “We the members of the National Council of the National Woman’s Party, are deeply moved by the death of our friend and co-worker, Sophie G. Meredith, who for years has proved herself an “untiring, conscientious and courageous worker for the cause of the freedom of women.” “Mrs. Meredith devoted her life to the service of others. While her most concentrated work was in the cause of women, she helped many others so quietly that she herself did not know the extent of her benefactions. By her death on August 27, the National Woman’s Party loses one of its most efficient and faithful, generous and devoted officers and workers.”

The day after she died The Richmond News Leaderstated: “Richmond women who fought the great battle for equal suffrage are mourning today for Mrs. Charles V. Meredith, who twelve years ago, threw all her strength and all her social gifts into the contest. She differed from some of her associates on the question of federal enfranchisement, but she held their warm affection. She was among the captains who planned and executed in Virginia a campaign that was as good-tempered as it was brilliant.” 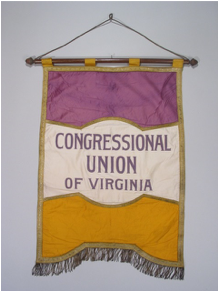 Sophie G. Meredith’s great granddaughter also named Sophie Meredith Sides (Cowan) has her four suffrage banners, papers and letters. The banners chronicle in cloth the history of suffrage from 1910 – 1920. A handwritten ledger with minutes from Congressional Union meetings beginning in 1915, along with drafts of her speeches and newspaper articles provide much of the information about Meredith’s suffrage work. The National Woman’s Party Records have several exchanges between Sophie Meredith and Alice Paul. Meredith’s portrait is on the Library of Congress’ website “Women of Protest: Photographs from the Records of the National Woman’s Party”.  Meredith is mentioned in articles in The Suffragist and as well as in the renamed newsletter Equal Rights following the passage of the 19thAmendment. There are two photographs of her in Robert P.J. Cooney, Jr’s Winning the Vote. The Triumph of the American Woman Suffrage Movement(Santa Cruz, CA: American Graphic Press, 2005).

A Zealous Pioneer for Women is inscribed on her tombstone in the Hollywood Cemetery in Richmond, Virginia.

Portrait photo courtesy of the Library of Congress, “Women of Protest: Photographs from the Records of the National Woman’s Party,” Edmonston, Washington, D.C. (Photographer)

Photo of CU at Virginia State Fair courtesy of author.

Photo of suffrage group in Washington DC courtesy of Library of Congress.

Photo of delegation with US Senator Swanson of Virginia appeared in the Richmond Times Dispatch.

This article first appeared in the Online Biographical Dictionary for the Woman Suffrage Movement in the United States, https://documents.alexanderstreet.com/VOTESforWOMEN. Used by permission.