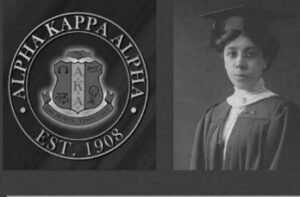 Nellie May Quander, a native of Washington, DC, was the descendant of two prominent free Black Virginia families who had been enslaved by George Washington. Her parents were John Pierson Quander and Hannah Bruce Ford Quander. Her father, John Pierson Quander, was a descendant of Nancy Quander, one of the slaves freed by President George Washington after his death; similarly, her mother, Hannah Bruce Ford Quander, was a relative of West Ford who was alleged to have been the son of the President.

Nellie Quander attended public schools in Washington DC and graduated with honors from the Miner Normal School (originally established in 1851 as the Normal School for Colored Girls). She continued her education and graduated magna cum laude from Howard University in 1912 with a Bachelor of Arts Degree in History, Economics, and Political Science. Many persons credit Nellie May Quander with the participation of the students from Howard University in the 1913 Women’s Suffrage Parade. Nellie May Quander the first International President of Alpha Kappa Alpha Sorority, Incorporated., twice contacted Alice Paul (who in conjunction with the National American Woman Suffrage Association (NAWSA) organized the parade) regarding the students’ participation in the parade. 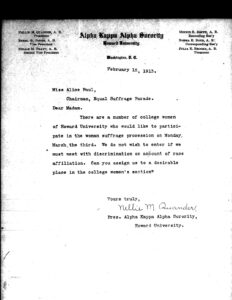 Initially, on February 15, 1913, she wrote Alice Paul that “there were a number of college women of Howard University who would like to participate in the women suffrage procession,” but “ do not wish to enter if we must meet with discrimination on account of race affiliation.” Two days later, on February 17, 1913, she wrote Alice Paul a second letter and reiterated almost verbatim the desire to participate and requested to be assigned in a “desirable place in the college women’s section.” Additionally, she inquired of Alice Paul about Jane Addams, the well-known suffragist who later founded Hull House and became the first honorary member of Alpha Kappa Alpha Sorority, Incorporated. It is unclear whether there was a response by Alice Paul but it is documented that Nellie May Quander marched in the 1913 Women’s Suffrage Parade with Mary Church Terrell (see the previous Suffragist Spotlight) and approximately twenty-five other students from Howard University.

After obtaining a Bachelor of Arts Degree from Howard University, Nellie May Quander earned a Masters of Arts degree from Columbia University, a degree in Social Work from New York University, and a diploma from Uppsala University in Uppsala Sweden. Nellie 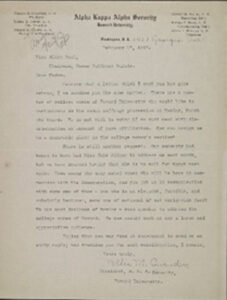 May Quander, who was an educator, suffragist, and a lifelong advocate for the rights of Black women, is rightfully recognized as the catalyst who assured the participation of the students from Howard University in the 1913 Women’s Suffrage Parade.