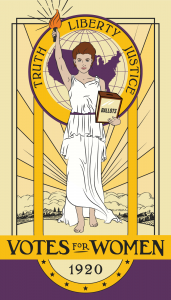 The Turning Point Suffragist Memorial is designed to inspire visitors by telling the story of the great civil rights achievement of the women and men of the American woman suffrage movement. Without the legal ability to vote, and with many confined to the home and child rearing, these dedicated women became the indefatigable force behind the 19th Amendment to the Constitution of the United States, guaranteeing a woman’s right to vote. 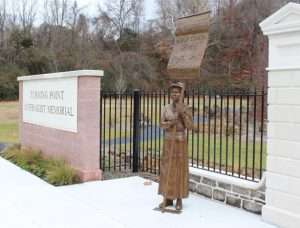 Visitors are greeted at the entrance by a banner attached to a light pole with a representation of Liberty holding a ballot box in one hand and the torch of enlightenment in the other. The Donor wall at the entrance credits those who contributed financial and other support to the Turning Point Suffragist Memorial.  A statue of suffrage leader Alice Paul with protest banner stands silently by a replica of the White House gates, leading visitors from the Entrance Plaza into the Suffragists Memorial Plaza. 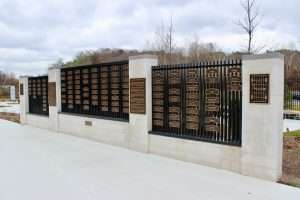 The location of the memorial commemorates the place where many suffragists were imprisoned, that part of the story receives special emphasis in the memorial. The long Suffragist Commemorative Wall honors the 91 “Silent Sentinels” imprisoned in 1917 for picketing the White House and features their names, birth and death dates, and hometowns. This plaza has a special area for the statue of Mary Church Terrell, one of the most prominent African American suffrage leaders.  The ballot box represents what the woman suffrage movement achieved.

The core of the memorial is the circular Turning Point Plaza that contains the statue of Carrie Chapman Catt at the center surrounded by 19 Informational Stations that tell the full integrated story of the woman suffrage movement. The number 19 represents the 19th Amendment to the U.S Constitution. 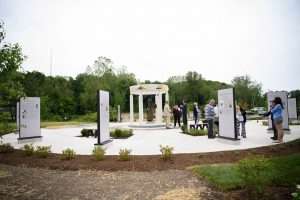 The story begins on Informational Station 1, which following a general introduction gives the context of the status of women at the time.  Women had very few rights, and slavery was widespread going back to colonial times.  Station 2 begins the suffrage story and covers the first Women’s Rights Convention in 1848 in Seneca Falls, New York and how many women saw their own lack of legal rights through work in the anti-slavery movement. The earliest efforts were to hold meetings to garner initial support then educate the public and legislators about why women should vote, an extremely radical idea at the time. The early suffragists made public speeches, wrote in newspapers, and held annual Women’s Rights conventions in various states—efforts that were interrupted by the Civil War (1861-1865). During this period Elizabeth Cady Stanton the great feminist philosopher and Susan B. Anthony, the great orator, were the most well known.

Station 3 describes the period following the Civil War, Reconstruction, and passage of the 13th, 14th, and 15th Amendments to the U.S. Constitution, the Civil War Amendments designed to enshrine equality for newly emancipated people who had been enslaved. During this period, several organizations formed to promote suffrage by adding women’s suffrage to state constitutions or to advocate for a suffrage amendment to the U.S. Constitution. Station 4 describes three lawsuits brought by suffragists Susan B. Anthony, Myra Bradwell, and Virginia Minor resulting in no new rights for women’s rights under the 14th Amendment.

Station 5 describes the early suffrage in the western territories and states, and the organizations that worked for woman suffrage through changes to state constitutions, demonstrating their resourcefulness and ingenious strategies; two such campaigns succeeded. Station 6 discusses the background and influences of the Progressive Era and how the suffragists convinced organizations with other goals, such as temperance, social welfare, and labor, to understand the importance of the vote.  Frances Willard, Jane Addams, and Rose Schneiderman are prominent here.  Station 7 picks up the campaigns to change state in the 1900s, now under new leadership following the passing of many in the first suffragist generation. Carrie Chapman Catt was elected to run the largest organization, the National American Woman Suffrage Association. Many successes can be credited to her. These campaigns to change state constitutions were based on detailed precinct level organization and follow through even in the most rural areas.  The almost superhuman effort gained 11 states in which male voters recognized women’s right to vote. The momentum was finally with the suffragists.  Station 8 covers the first national suffrage parade in 1913, with representation from every state and several foreign countries where women voted.  This parade was covered in newspapers across the country and woman suffrage was finally a nationwide campaign.

Station 9 covers the formation of the radical National Woman’s Party to focus exclusively on the pursuit of a federal suffrage amendment to the U.S. Constitution and a strategy to engage in elective politics. Station 10 opens the memorial’s focus on the NWP with the “Silent Sentinel” protest at the White House and salutes the genius behind a strategy that would gain nationwide attention.

Station 11 describes how World War I interrupted the mainstream effort of NAWSA but brought ever-more critical banners of the “Silent Sentinels” at the White House.  Stations 12 through 14 detail the arrests and imprisonments of suffragists that culminated in the “Night of Terror” at the Occoquan Workhouse, a horrific episode in the struggle for women’s rights that was recounted in newspapers and became a “turning point” for the suffrage movement.

Station 15 presents the hard-fought successful New York Campaign, the first state east of the Mississippi to win a state referendum campaign, which set the stage for passage of the amendment in the US House of Representatives. The “Silent Sentinels” were released from prison, and President Woodrow Wilson’s turnaround to support for the amendment are described here.

Station 16 covers the arduous two years of moving the suffrage amendment through congress, with its many disappointments and successive years of failure to pass the Senate, missing by 2 votes, then by 1 vote, involving nationwide pressure campaign for the reluctant senators–then final congressional passage in June of 1919.  Station 17 describes the ratification process, again pressuring all of the state legislatures for over a year.  The 36th and final state came months after tedious strategizing with supportive state governors, national political party players, and legislative leaders.  Finally, it was Tennessee that agreed to hold a special session to consider the vote on ratification of the amendment. Both mainstream and radical suffragist groups descended on the state capital along with the well-organized anti-woman suffrage forces. Tennessee finally by a one vote margin, ratified bin August 2020.  Suffragists had won women’s right to vote by U.S. Constitutional amendment! They celebrated across the nation!

Station 18 provides an overview of barriers to voting including lack of citizenship due to longstanding racial discrimination, primarily against African Americans, Native Americans, and Asian Americans. Station 19, the final station, describes what followed suffrage: the creation of the League of Women Voters by NAWSA, international women’s suffrage and women’s rights efforts, and the proposal for the Equal Rights Amendment by Alice Paul and the NWP. The second panel of Station 19 calls for the future enshrinement of greater civil rights for all.

The Turning Point Plaza also contains a bridge to support community engagement, with events such as certain Girls Scouts’ ceremonies. 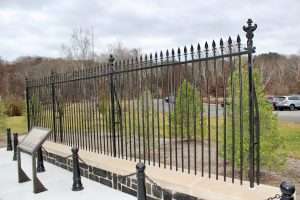 Lastly, a garden area entered from the Suffragist Memorial Plaza has paths and benches to provide opportunities for reflection on the suffrage movement and the heroic lives of suffragists, the lives that are still largely absent from American history texts.