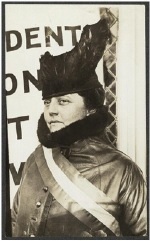 Alison Turnbull Hopkins of Morristown, N.J., was New Jersey state chairman of the National Woman’s Party and a member of the NWP executive committee in 1917, as well as president of various women’s clubs. Her husband was a supporter of President Woodrow Wilson and he served on the Democratic National Committee in 1916. She was arrested July 14, 1917, for picketing the White House, and sentenced to 60 days in the Occoquan Workhouse. She was pardoned by President Wilson after three days at the request of her husband. Hopkins, however, claimed that Wilson had acted only to save himself political embarrassment and stood alone at the White House gates with a sign reading, “We ask not pardon for ourselves but justice for all American women.”