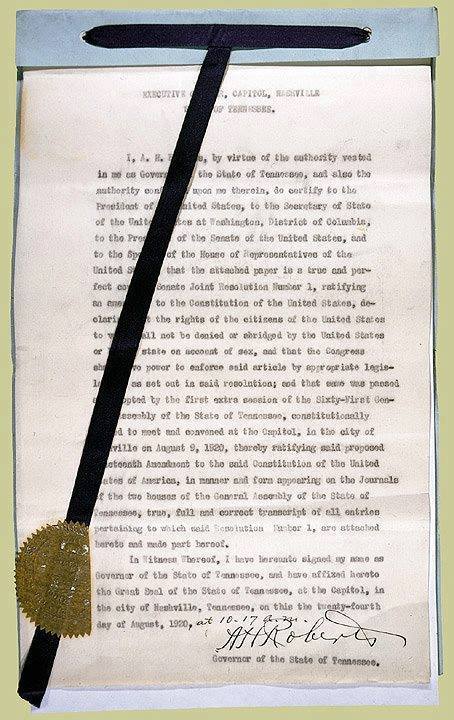 Photo: Tennessee’s certificate of ratification, now on a train from Nashville, Tennessee, to Washington, D.C.

August 25, 1920: As Alice Paul and other National Woman’s Party stalwarts hold one last vigil tonight, the final victory for the Susan B. Anthony (woman suffrage) Amendment appears to be at hand. Despite the dogged determination of opponents to fight to the bitter end, the last obstacle to Secretary of State Colby proclaiming that the amendment was properly ratified and is the 19th Amendment to the U.S. Constitution has been brushed aside.

All that remains now is for Tennessee’s certificate of ratification to arrive in Washington, D.C., and be delivered to Secretary Colby. He has said that even if the certificate arrives as late as midnight or a little after, he will immediately go to the State Department and formally proclaim that the U.S. Constitution says: “The right of citizens of the United States to vote shall not be denied or abridged by the United States or by any State on account of sex,” and that “Congress shall have power to enforce this article by appropriate legislation.”

This day began like so many before it, battling anti-suffragists. Having failed to prevent the Anthony Amendment from getting the approval of 2/3 of both Houses of Congress and 3/4 of the State legislatures, our opponents recently tried to use local courts to prevent the Governor from certifying Tennessee’s ratification as the 36th and final one needed. When that desperate move proved unsuccessful, anti-suffragists turned their attention from Nashville to the nation’s capital. Today, they attempted to get the District of Columbia Supreme Court to issue an order restraining Secretary Colby from signing the ratification proclamation until all legal issues – no matter how groundless they are – could be fully resolved by the U.S. Supreme Court.

The plaintiff was Charles S. Fairchild, acting on behalf of the American Constitutional League, and the case was argued by attorney Alfred D. Smith. Justice Frederick L. Siddons first raised the question of whether he even had the authority to issue such an order, and asked Smith to go find references and citations to show that he could do so. Smith returned to court a few hours later with the required documentation, but the judge still refused Smith’s request to summon the Secretary of State to show cause why he should not be restrained from signing the proclamation, and would not issue an order forbidding the Secretary from signing:

“I hold that the act of promulgating the ratification of the suffrage amendment is purely a ministerial act. I am averse to issuing a ruling ordering the Secretary of State to show cause why he should not be enjoined on the grounds presented here.”

The judge also seemed rather surprised to see that the “antis” were not just attacking Tennessee’s ratification, which at one time was the subject of controversy, but all 36 ratifications: “Do you attack the validity of every legislative act of the States with reference to ratification ?”

Smith replied: “We do on the grounds, first that Congress had no right to propose such an amendment, and secondly, because the acts of ratification were in some instances invalid because the legislatures which voted favorably were elected before Congress proposed suffrage ratification.”

A number of Southern States – Tennessee being the only one that actually ratified – have a rule that a Statewide election must take place between the time a Constitutional amendment is passed by Congress and the State legislature can vote on ratifying it. But in June, the U.S. Supreme Court made a ruling in regard to Ohio’s ratification of the 18th Amendment (Hawke v. Smith, 253 U.S. 221), which has been interpreted by virtually all legal authorities and scholars as invalidating all restrictions on any State legislature’s right to ratify a Constitutional amendment at any time.

Though Justice Siddons didn’t buy any of Smith’s arguments, he did grant him one favor. Rather than putting things on hold while he took time to consider a ruling, the judge immediately dismissed the application so Smith could take it directly to the District of Columbia Court of Appeals.

Though it’s possible that the D.C. Court of Appeals might first agree that it has the authority to temporarily restrain Secretary Colby from signing the proclamation, and then choose to do so, it’s very unlikely it could act before Colby has signed the document. Opponents are indicating that if they fail to get such a ruling, or if it comes too late, their final strategy will be to continue challenging the legality of the ratification process. Their new goal would be to get the U.S. Supreme Court to rule before the November elections that at least one State’s ratification of the 19th Amendment was invalid. If that occurs, and another State hasn’t ratified by then, things would stay the same as they are now through Election Day, with women having full voting rights in 15 States plus the Territory of Alaska, the right to vote for some offices or in some elections in 26, and no voting rights at all in 7.

Suffrage leaders are quite confident that unless the train from Nashville is extremely late, our side will win tomorrow’s race, and that Tennessee’s certification will be delivered to Secretary Colby before the D.C. Court of Appeals can convene.

National Woman’s Party members are keeping a close watch on all developments. In a move reminiscent of their “Silent Sentinels,” who picketed outside the White House gates to put pressure on President Wilson to help get the Anthony Amendment through Congress, party members are stationing themselves around the State Department tonight waiting for the final act in this drama. The building will be kept open, because some State Department employees have been ordered to stay there to receive and sign for the registered letter containing the certificate from Tennessee. The latest estimate from postal officials is that the document will arrive sometime between 12:30 and 2:30 A.M.

No matter at what hour Colby’s proclamation is made, it will be a time of triumph and celebration for all who have worked so tirelessly and so long for woman suffrage. But by no means will there be a single commemoration. There are plans for a variety of observances from coast to coast over the next few days. Then it will be time for each individual suffragist and every suffrage organization to decide what to do now that all bans on women voting have been explicitly and permanently overruled by the U.S. Constitution.