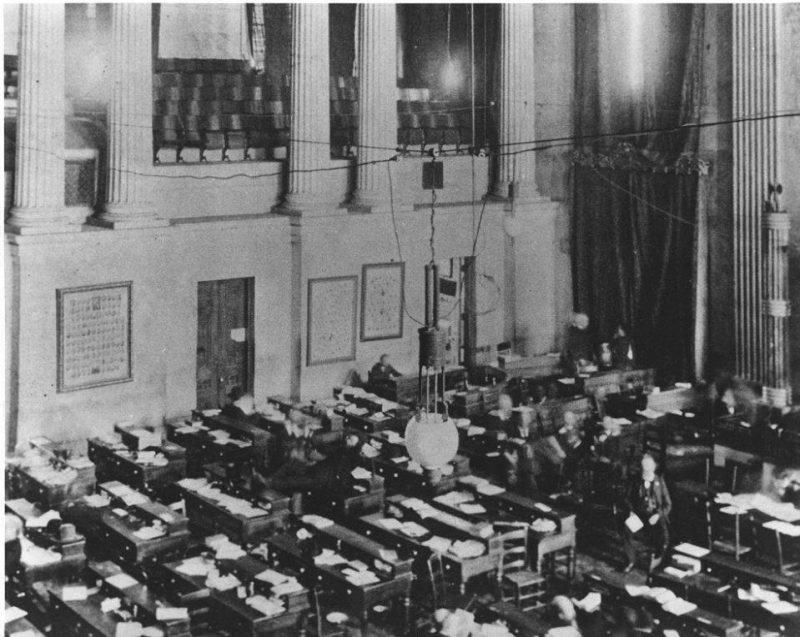 Photo : The Tennessee House, which earlier today voted to erase from the House Journal its approval of the 19th Amendment on August 18th.

August 31, 1920: The anti-suffragists are back in Nashville, and they’re as unrepentant, tricky, and obstructionist as ever. Thirty-seven members of the Tennessee House, who fled to Alabama ten days ago in an unsuccessful attempt to prevent a quorum from being present to dispose of the last parliamentary formality regarding Tennessee’s ratification of the 19th Amendment, suddenly returned this morning and took part in a surprise attack on the House’s previous approval of the suffrage amendment.

Before all the pro-suffrage members had even arrived for what they thought was to be a routine day, House Speaker Seth Walker and his fellow anti-suffragists quickly introduced and passed a motion. It supposedly erases from the House Journal all references to its vote to ratify on August 18th, and the vote three days later to permanently table a motion to reconsider.

Today’s motion passed 47-37, all 47 anti-suffrage members present, including the 37 who just returned from Alabama, with 6 members not voting, and 9 absent in the 99-member House. Then, by a voice vote, the House adopted a motion to reconsider its previous approval of the ratification resolution. They then voted 47-24, 20 not voting, 8 still absent, not to concur with the Senate’s action of August 13th to ratify.

In the opinion of Tennessee Attorney General Thompson, reversing a ratification vote is not legal. A letter from him stating this view was read on the House floor during the debate.

There is also some reassuring historical precedent. On January 5, 1870, New York voted to take back its previous approval of the 15th Amendment on April 14, 1869. There was a heated debate in the U.S. Senate on February 22, 1870, regarding the right of a State to revoke its approval, which illuminated all the complex legal aspects involved. But on March 30, 1870, the U.S. Secretary of State issued a proclamation that the 15th Amendment had been ratified by the required number of States, and New York was included among them, though by this date other States had ratified and made the matter of New York’s status irrelevant. Today’s attempted rescission stands on even weaker ground than the earlier one because it occurred after the Secretary of State had already declared the 19th Amendment was properly ratified and part of the U.S. Constitution.

Both sides are awaiting statements from U.S. Secretary of State Colby and U.S. Attorney General Palmer on the issue, though it is being said tonight that a campaign to get a 37th State to ratify may be launched by our forces in order to make Tennessee’s status as irrelevant in 1920 as New York’s was in 1870, and thereby head off any legal challenges in regard to women voting in the November elections.

Meanwhile, the 19th Amendment has already been implemented in some places. On August 27th, the day after the proclamation of ratification was signed by Secretary of State Colby, 87 women voted in a special bond issue election in South St. Paul, Minnesota. And today in Hannibal, Missouri, Marie Ruoff Byrum voted at 7 a.m. in a special election to fill a vacancy for city alderman, walking to the polls in a pouring rain at that early hour in order to be the first woman to have voted in her town – and State. Until passage of the 19th Amendment, women in Minnesota and Missouri had been authorized by their State legislatures to vote for President – and nothing else – but since those Presidential suffrage bills had only been passed in the past year, women in those States had not yet had the opportunity to do even that.

So, despite the legislative and courtroom antics of the “antis,” implementation of the 19th Amendment is proceeding well, and as the old saying goes: “The dogs bark, but the caravan moves on.”