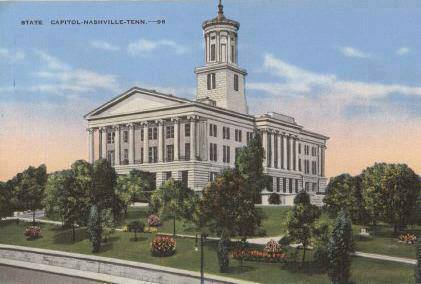 PHOTO: The Tennessee State Capitol in Nashville, where ratification of the Anthony Amendment is now being considered.

August 9, 1920: The Tennessee Legislature is now in session, with voting on ratification of the Susan B. Anthony (woman suffrage) Amendment at the top of its list of priorities! Governor Albert Roberts, who called the session, opened it by asking for quick approval of the amendment, so that women might “share in shaping the destiny of the Republic.” But ratification in this 36th and final State needed to put the Anthony Amendment into the U.S. Constitution as the 19th Amendment is still a cumbersome process, and though the chances of success look better each day, it is by no means assured.

This, of course, doesn’t stop leaders on either side from making equally confident predictions of inevitable victory. Anti-suffrage organizations have been claiming to already have enough votes to block approval, while Carrie Chapman Catt, head of the National American Woman Suffrage Association, has been saying since July 25th that the votes are there for passage

But the most credible polls of the legislature come from the National Woman’s Party. The most militant of the U.S. suffrage groups has been making the most conservative pronouncements of suffrage strength, and accompanying them with exact figures, even when the numbers were not favorable. In yesterday’s announcement it was said that ratification was still one vote short in the Senate, and two in the House. But tonight at its Washington, D.C. headquarters, it was announced that one more Senate Democrat and six more House Republicans have pledged to vote for ratification. So, Alice Paul now believes that an exact majority has been secured in the 33-member Tennessee Senate and that there are four votes more than necessary for passage in its 99-member House.

The task is now to keep a majority for suffrage through the time when the actual votes are cast. That’s no easy job, because pledged votes shift on a daily, sometimes even hourly, basis. Critical to victory are party caucus meetings, where the parties may – or may not – attempt to get all their members to vote the same way.

Parley Christensen, Presidential nominee of the Farmer-Labor Party, called the failure to immediately demand a unanimous vote “a direct betrayal by the Republican Party of its platform pledge for woman suffrage, and Senator Harding, Will Hays and their associated Republican leaders must plead guilty to the betrayal.” Senator Warren G. Harding is the Republican nominee for President, and Will Hays heads the Republican National Committee.

Christensen is of the opinion that Republicans are now getting cold feet about ratification because some of their most powerful Senators, such as George Moses of New Hampshire, and Frank Brandegee of Connecticut, are outspoken anti-suffragists, and might be defeated if women in New Hampshire and Connecticut can vote in November. But the major parties have endorsed nationwide woman suffrage in their platforms, and their Presidential nominees are working for ratification, so both Republicans and Democrats certainly give at least the appearance of being enthusiastic supporters of our cause.

Today’s legislative session lasted only an hour, and was mostly ceremonial, but tomorrow the real business begins with the introduction of ratification resolutions that will be referred to House and Senate committees for hearings. It is hoped that the committees will quickly vote to send the resolutions to the full legislature for a vote.

There’s certainly a lot of work to do in the next week or two, but now that a generations-long, nationwide struggle has narrowed down to getting just 17 Tennessee State Senators and 50 House members to cast the favorable votes they’ve promised, the finish line of this marathon appears to be in sight!