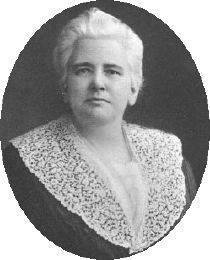 December 29, 1913: Reverend Anna Howard Shaw, President of the National American Woman Suffrage Association, talked about the status of her personal tax revolt tonight, and gave out a copy of the letter she recently sent to suffrage advocates around the country asking them to join her in refusing “taxation without representation.” Though not in favor of the kind of violent actions taken by English militants, she is nevertheless standing firm, and will practice “passive resistance” regardless of the consequences. She said earlier this evening:

“I hold it is unfair to the women of this country to have taxation without representation, and I have urged them to adopt a course of passive resistance like the Quakers instead of aggressive resistance. I say to the Government, ‘you may pick my pocket because you are stronger than I, but I’m not going to turn my pockets wrongside out for you. You will have to turn them out yourself.’ Since my letter was sent all over the country, I have received letters of encouragement and support from all directions. I believe that the spirit of no taxation without representation that resulted in the Revolutionary War is inherent and just as actual in the women of the country as it was then in the men of the country.”

She is aware that her refusal to fill out her local tax assessment form or pay her taxes could result in her having to pay a fine and continued failure to pay could result in her imprisonment. “Well, I will not pay the fine,” she said, and if held in contempt, “I should go to jail of course.”

Though her personal battle is with the tax assessor in Upper Providence Township, Delaware County, Pennsylvania (a State where women cannot vote), Shaw’s letter to suffragists nationwide has attracted the attention of U.S. Treasury officials. They warned today that failure to file a return is just as much a violation of the law as refusing to pay taxes assessed. The 16th (Federal Income Tax) Amendment was ratified by the 36th and final State needed on February 3rd of this year.

Since the average annual individual income for Americans is about $800 a year, these generous exemptions mean most people won’t have to file, or pay any Federal taxes at all, but officials have made it clear that they are determined to strictly enforce the law in regard to those who qualify. (It should be noted that the calculation of income and exemptions for 1913 will be different from normal, because only income from March 1 to December 31 is to be counted, since the amendment authorizing a Federal income tax was not ratified until early February.)

This is the text of the letter Rev. Anna Howard Shaw sent to her fellow suffragists:

“The enactment of an income tax law has caused assessors to be more insistent in their demand that an accurate statement of all personal as well as real property shall be listed and returned within a specific time, in order that no property may escape the Government tax collectors.

“Here women may make their passive protest and decline to aid the Government in levying upon them by refusing to render an account of their property. In this manner we can show our loyalty to those who struggled to make this a free republic and who laid down their lives in defense of the equal rights of all free citizens to a voice in their own Government. This is a time when we may utter again into the ears of an apostate republic the words of James Otis, the great champion of the liberties of the colonists when he wrote:

” ‘The very act of taxing over those who are not represented appears to me depriving them of their most essential rights as free men, and if continued seems to be in effect an entire disenfranchisement of every civil right. For what one civil right is worth a rush after a man’s property is subject to be taken from him at pleasure without his consent ? If a man is not his own assessor, in person or by deputy, his liberty is gone or he is entirely at the mercy of others.’ “

“Let our protest be universal, and let every believer in justice unite in this mode of passive resistance and steadfastly refuse to assist the Government in its unjust and tyrannical violation of its fundamental principle that ‘taxation and representation are one and inseparable,’ and thus prove ourselves worthy descendants of noble ancestors, who counted no price too dear to pay in defense of liberty and equality and justice.”