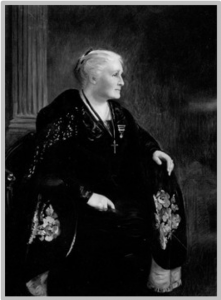 Dr. Kate Waller Barrett built a legacy of contributions to suffrage in Virginia and the country on her belief in the power of motherhood. A widow with six children, she gave her intelligence, time and compassion to an enormous number of international humanitarian causes, serving as president of the American Legion Auxiliary; state president of the Daughters of the American Revolution; president of the National Council of Women; vice president of the Conference of Charities and Corrections of Virginia; special representative of the U.S. Government in 1914 to investigate conditions in Europe surrounding alien women after the end of World War I; chairman of the Committee on National Defense; delegate to the National Peace Conference at  Zurich in 1919; and member of the Board of Visitors of William & Mary College and the university’s Phi-Beta-Kappa chapter.

In 1909, Barrett helped found the Virginia Equal Suffrage League, which grew to over 30,000 members by 1919.  She also ran the National Florence Crittenton Mission from her long-time home in Alexandria, Virginia, which also served as the NFCM headquarters. Among her followers and admirers were the residents of IVAKOTA, an NFCM home in Clifton, Virginia for unwed mothers that had some 97 sister facilities around the country during its tenure. Barrett’s teachings were based on “Beauty, Bread & Brotherhood,” encouraging collegiality with others in a well-ordered world and the opportunities for woman to learn a craft/vocation to provide self-care for both herself and her child.

Barrett was active in the National and State’s Suffrage Association at a time when more than 93 women were jailed at the nearby Occoquan Workhouse for demonstrating in Washington to gain the right to vote. She was a charter member of the League of Women Voters and received a standing ovation for her speech at the 1924 Democratic National Convention in New York.   In a final tribute, she was asked to run for Governor of the Commonwealth of Virginia. On her death in 1925, both state and national flags were flown at half-staff – an honor bestowed to no other woman before her. 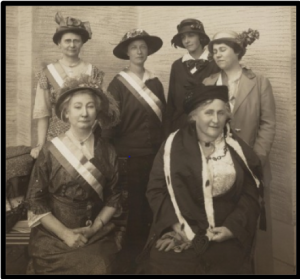 Born near Fredricksburg, Virginia on her father’s 1,000-acre property, also known as “Clifton.” She was the eldest of eight girls and for two years attended the prestigious Arlington Institute for Girls in Alexandria.  In 1876, she married Rev. Robert South Barrett and moved to the rough Butchertown section of Richmond, Virginia where she saw for the first time a “seamier” side of life. After four years, the couple moved to Henderson, Kentucky where she persuaded her husband to open a small mission for “friendless and outcast girls.”  In 1889, they moved to Georgia where, encouraged by her husband, she completed an M.D. program at the Women’s Medical College of Atlanta. It was in Atlanta that she founded her first home for unwed mothers after turning to Charles N. Crittenton, a wealthy New York businessman/philanthropist who answered her appeal with a $5,000 donation. Later, Barrett would often be seen on the Clifton IVAKOTA campus, accompanied by one or two of her six children.

Photos Courtesy of the Barrett famil.)