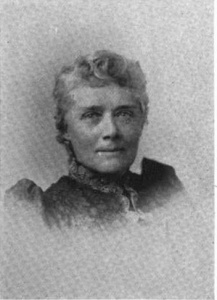 “Author, Traveler, Scholar.” These are the terms etched into a New Richmond, Ohio headstone to describe 19th century journalist, Eliza Archard Conner. Archard was born in 1838 in the abolitionist town of New Richmond, Ohio and died in 1912 in New York City. She was tough, highly opinionated, and a radical in her time. She seized any opportunity to prove herself as a prolific journalist, and to influence other women to live up to their full potential. These qualities were no doubt seeded by spending her formative years surrounded by people who resolutely stood up for equality. Conner’s educational background, brief teaching career, and passion as a journalist led her to develop her belief that women deserved the same opportunities as men.

Growing up in New Richmond, she attended the Clermont “Parker” Academy, one of the first schools to accept any student regardless of race or sex. She studied the same subjects alongside African-Americans and boys in the mid-1840s. She decided to leave the academy only when the teachers enforced a new rule: no talking during study hours. From the start, Conner rebelled against rules with which she disagreed.

In the late 1850s, she attended Antioch College in Yellow Springs, Ohio–one of the first coeducational schools in the nation. However, coeducational was a deceiving term at the time. Both male and female students could enroll at the school, but the college enforced many restrictive rules meant to “protect” single female students from being “corrupted” by the influence of men. Conner and other female students fought against these rules, and many became women’s rights activists.

Archard briefly taught school in Indianapolis in the 1860s. An 1894 Cincinnati encyclopedia indicates that she demanded and received equal pay while employed at the school. However, her true calling was journalism. She wrote for the Cincinnati Commercial Gazette, Saturday Evening Post, and Godey’s Lady Magazine. Eventually, she became an editor for the American Press Association and her columns were published in newspapers across the United States. Many of her articles are written under her initials E.A. , E.A.C. , or under the alias “Zig.”

Many of her articles were written in sections specifically designated for “women-related” topics, but like many women’s rights journalist of the time, she utilized these articles to spread feminist thought and praxis. Archard’s style of writing replicated a very militant style of journalism.  She often used language that called for a revolution and criticized men and women for sticking to traditional values rather than working toward progress.

Archard’s women’s rights articles focus on her belief that women can and should achieve anything they set their minds to, regardless of sex, if for no other reason than as a matter of personal security. She argues that women need to work with equal pay, independent of a husband who may not always be capable of caring for her and her children. She attacked women who accepted lower wages than men, believing that a woman who does this is at fault for unequal pay for all women. This was not the only injustice she held women accountable for, as she insisted women needed to educate themselves even if they could not attend a university for formal education. Women had a responsibility to read newspapers or take classes at women’s clubs to stay up to date on politics and reform.

Archard was highly involved in women’s suffrage. She served as chairmen for the executive committee of the Women’s Press Club and was an active member in New York’s Sorosis. Many advertisements in newspapers list her as a prolific suffragist and women’s rights speaker in both women’s clubs and conventions. However, she did not have mercy on women who believed they were incapable of achieving personal progress without the right to vote; she felt with hard work and patience, women could achieve anything to which they put their minds.  She once wrote: “Souls and bodies can be healed, without the right of suffrage. Disease may be remedied, though the doctor cannot vote.” Many of her articles were stories of successful women and what they achieved, showcasing many examples of women who lived her own ideal to prove its efficacy.

On January 24, 1889, Archard attended the National Suffrage Convention. During her speech, The Coming of Sex, Archard lectures on how women’s intelligence and talents are essential to running a country and any other way is “one-legged.” She also discusses her struggles as a woman journalist. She declares that she is proud to have contributed to this struggle and states that “Struggle means development; it can come in no other way.” Her speech and delivery were described as the “gem of the convention” by the press.

Later in life, Archard traveled all over the world and often wrote about other countries. In the 1880s, she wrote a book, E.A. Abroadwhere she detailed her travels around Europe. In the late 19thcentury, she moved away from her husband and son in Cincinnati to New York City to pursue her journalism career. She remained there until she died in 1912, eight years before women received the right to vote.

Eliza Archard Conner’s views of women’s rights had their roots in her upbringing. During her early life, her education shaped her to believe in equality, which in turn, pushed her to work hard for what she wanted in life, no matter the obstacles that laws and society set forth for her.  She was surrounded by encouraging, strong people in New Richmond, who set the foundation of a belief in equality for all. In her college years, her feminist classmates at Antioch showed her women were meant to exceed society’s expectations of them. She believed that if her sex pushed and worked hard enough they could correct the injustices that bound them. The fact that she could achieve everything she strove for in life proved to her that the same was possible for every woman, and she dedicated her life to inspiring that notion in others.

The Brooklyn Daily Eagle,pp.18. “Eliza Archard Conner: One of the Hard Workers in the Literary World,”July 5, 1981. https://www.newspapers.com/image/50449455/?terms=Eliza%2BArchard%2BConner

Sarah Preston Parker, “A Brief History of Clermont Academy, Together with a Few Items from the Lives of its Founder and Principal.” Typewritten copy available at Clermont County Public Library: New Richmond, 1894.

Saturday Evening Mail, “Woman and Home: Women Should Be Equipped for Winning Their Way,” March 3 1894, pp 4.