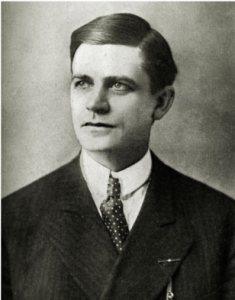 The first governor of the Territory of Alaska made his mark on suffrage history by putting his signature on legislation extending the right to vote to women.

Walter E. Clark was born to a farming family in Ashford, Connecticut and became a school teacher who, by the age of 19, secured a position as principal of the Manchester, Connecticut, elementary schools. He later turned to journalism and worked at the Hartford Post, Washington Times,Toronto Globeand the Seattle Post-Intelligencer.  During pauses between jobs, he traveled extensively in Alaska as a prospector, and though he didn’t find gold, he became an expert on Alaska. He was appointed the governor of the district in 1909 and became the first governor of the Territory of Alaska in 1913.

During his term, the first session of the Legislature of Alaska acted on House Bill No. 2, An Act to Extend the Elective Franchise to Women in the Territory of Alaska.  It stated “that in all elections which are now, or may be hereafter authorized by law in the Territory of Alaska, or any sub-division or municipality thereof, the elective franchise is hereby extended to such women as have the qualifications of citizenship required of male electors.”

Even without a woman’s suffrage campaign, the measure passed both the House and Senate unanimously after suffragist Cornelia Hatcher organized a petition and delivered it to lawmakers. Clark signed the act into law on March 21, 1913.

Alaska natives were excluded from voting by the federal legislation that established the Alaska Territory.  But members of the Alaska Native Brotherhood and Sisterhood lobbied for voting rights. In 1915, the Alaskan Territorial Legislature recognized the right of Native Alaskans to vote, on the condition that they relinquish their tribal customs and traditions. In 1924, Congress extended U.S. citizenship and the vote to all Native Americans with the Indian Citizenship Act. However, the Alaska Territory imposed a literacy test similar to those of southern states. Further, because Alaska was a territory and not a state, their representation in Congress was limited.  It wasn’t until Alaska became the 49thstate on January 3, 1959 that most Alaskan women and men gained full voting rights.

Following the 1913 session of the legislature, Governor Clark resigned and moved to Charleston, West Virginia, where he purchased a Charleston newspaper and resumed his career in journalism.  He died Feb. 4, 1950 at the age of 81 and is buried in Charleston.

From the National Park Service, their sources: