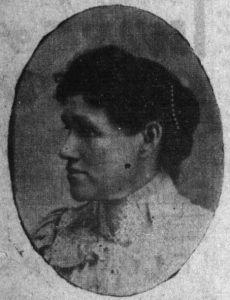 Jane Elizabeth Van Meter was born in Vermillion, Dakota Territory on September 21, 1861 to Arthur Charles Van Meter and Mary Aungie Van Meter.  Her mother was a Dakota woman from the Yankton Agency at Greenwood.  At age eight, she started attending school in the log cabin school in Vermillion and learned the English language.  As a young woman, she worked with friend (and fellow suffragist) Alice Bower setting type for the Vermillion Plain Talk newspaper.  In 1880, Van Meter studied music at Ripon College in Wisconsin.  In 1883, she moved with her family to central South Dakota, and Jane taught school in Fort Pierre and at an Indian school on the Cheyenne River Agency.

In 1885, she married Charles Westbrook Waldron.  In July 1889, they established a ranch that eventually encompassed several thousand acres.  In 1890, a man named Black Tomahawk also claimed about 320 acres of the same land as an allotment ahead of the Great Sioux Reservation being broken up for Euro-American settlement.  In court from 1890 to 1905, the case between Black Tomahawk and Jane Waldron debated whether she, being of mixed white and Dakota ancestry but an adopted member of the Two Kettle band and enrolled at the Cheyenne River Agency, had equal claim to those land rights as someone of full tribal ancestry.  A highly-public case, newspaper articles described her [in terms of the day] as having “an Indian ancestry sufficient to give her a legal standing with annuity Sioux, but in appearance and deportment would readily pass for a pale face.”  The testimony of 114 witnesses at Pierre, Cheyenne River, and Greenwood, supported Waldron’s legal claim of a long mixed ancestry dating to the late-18th century and “roots deep in the traditional ways and lifestyle of her mother’s people.”  Reportedly, when opposing council questioned her standing by describing her housing, marriage, clothing, work, etc. as being white and not native, Waldron responded: “Well I tried to imitate the customs of the white race as fast as I could learn them, I think that is the aim of the government.” Eventually in 1905, a federal court settled in favor of Waldron, setting a precedent for the legitimacy of those with mixed ancestry that had national impact.

From 1900 to 1903 (Robinson), state governors appointed Waldron to serve on the woman’s board that inspected state blind and deaf schools, prisons, hospitals, and asylums, and she was selected in 1902 to be one of eleven state delegates to a national prison congress in Philadelphia.

For the South Dakota Equal Suffrage Association, Waldon served as superintendent of press work in 1907 and 1909, working to provide newspapers across the state with information about equal suffrage.  In 1908, she reported over the previous year having solicited 300 newspapers to take articles and sending out 910 articles, “not including convention calls, communication about state work, etc.”  In 1910, she served on the state Votes for Women campaign’s finance committee.  Waldron served as delegate to the conventions of the National American Woman Suffrage Association in 1907 and 1910.  In 1907, she was a delegate with Florence Jeffries, also of Fort Pierre.  In 1910, she attended with Jeffries, Lorena K. Fairbank of Sioux Falls, and Waldron’s daughter, Alice Island “Isle” Waldron.

In 1912, the Waldrons moved to Saskatchewan, Canada. After her husband’s death in 1935, she reestablished U.S. citizenship and visited frequently, but died in Canada on January 2, 1941.

Anderson, Harry H. “The Waldron-Black Tomahawk Controversy and the Status of Mixed Bloods among the Teton Sioux.” South Dakota History 21(1) (1991), 69-83.