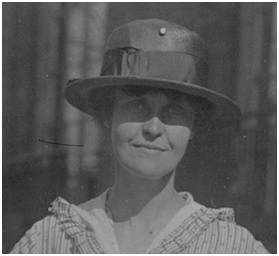 Mary Winsor was from Haverford, Pennsylvania and came from a family of pioneer Quaker descent. She was educated at Drexel Institute of Philadelphia, at Bryn Mawr, and abroad. At the request of the American Academy of Political and Social Science she made a survey of the English Suffrage movement. She was Founder and President of the Pennsylvania Limited Suffrage Society and was active with the National Woman’s Party.

At its Draftee Parade on September 4, 1917, she was arrested at the age of 44 and sentenced to 60 days at the Occoquan Workhouse. On August 6, 1918, she was again arrested at the Lafayette statue in D.C. At the trial on August, 15, 1918, for “holding a meeting on public grounds” the arrestees refused to participate in their trial. Mary Winsor said “it is quite enough to pay taxes when you are not represented, let alone pay a fine if you object to this arrangement.” She was sentenced with the others to 10 days in the D C. Jail. She had worked and spoken for suffrage in many parts of the country and participated on the “Prison Special’ speaking tour in February 1919.