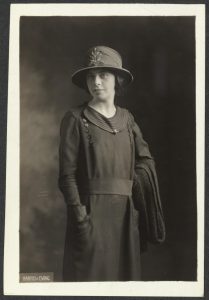 Matilda Young of Washington, D.C., was the sister of NWP activist Joy Young. She worked full-time for suffrage for several years. She was the youngest NWP picket arrested, only 19 years old when she served her first prison term. She was arrested for picketing Nov. 10, 1917, sentenced to 15 days in District Jail, and served two terms in jail in January 1919; five days for watchfire demonstrations and three days for applauding suffrage prisoners in court. While burning one of the president’s speeches in Lafayette Square, she said, “The women of the country will keep the flame of liberty ablaze until complete victory is assured.”