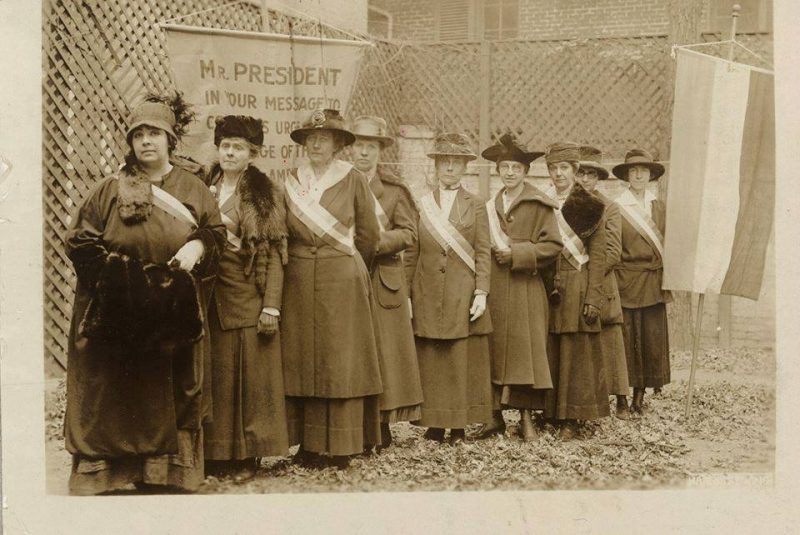 November 12, 1917: After all they’ve gone through, from extremes of weather to attacks by hostile crowds, arrests, and lengthy jail sentences, it’s not easy to shock the suffragists who have been picketing President Wilson over his refusal to support or work for the Susan B. Anthony (woman suffrage) Amendment while he vigorously promotes democracy abroad. But today they were caught by surprise.

Judge Mullowney of the D.C. Police Court did something absolutely no one expected. After all 41 of those arrested day before yesterday made their statements in his courtroom, they were given suspended sentences and permitted to go free. Whether this is a sign that the Government has decided to give up trying to persecute women for exercising their constitutional right to peacefully protest, or simply making it look as if leniency is being shown before extreme sentences are imposed if the protests continue is being debated tonight. But the uncertainly won’t last long, because 31 of the banner-bearing protesters went right back to the White House fence, were once again arrested, and will be back in court soon.

At their trials today, the defendants told the judge – and the many reporters present – why they protest, and that they do so in what they believe is a totally legal manner. According to Anna Kelton Wiley:

“I want to state that we took this action with great consecration of spirit. We took this action with willingness to sacrifice our personal liberty, in order to focus the attention of the nation on the injustice of our disenfranchisement, that we might thereby win political liberty for all the women in this country. The Constitution says Congress shall not in any way abridge the right of citizens peacefully to assemble and petition. That is exactly what we did. We peacefully assembled, and then proceeded with our petition to the President for redress of our grievance of disenfranchisement. The Constitution does not specify the form of petition. Ours was in the form of a banner. To say we ‘broke traffic regulations’ when we exercised our constitutional right of petition is therefore unconstitutional.”

“My conscience is clear. I walked on Saturday afternoon from Cameron House to the further gate of the White House. I obstructed no traffic. I was moving. At the further gate there was no crowd. I held a banner which all might read. The Administration should commend, instead of allowing a prison sentence to be imposed upon, women who hold aloft words which show the utmost devotion to the ideals of political liberty on which the Government is founded.”

Eunice Dana Brannan emphasized the need for a Federal suffrage amendment and reaffirmed the reason why the National Woman’s Party is picketing President Wilson at the White House:

“As a newly enfranchised New York woman, I realize more acutely than ever the limitations of the State referendum method, the fact that we are prisoners in our own State so far as the franchise is concerned. So long as the President refuses to endorse the Federal Amendment he proves to his own country and to the whole world that he is an advocate of the unjust discrimination against American women – that he preaches democracy in words but not in democratic deeds.”

The tactics of the pickets are controversial, provoking both strong support and vehement opposition even among fellow suffragists. A delegation of 40 women voters from New York, enfranchised just six days ago by a State referendum, went to the White House today in support of the protesters. Two were admitted and allowed to leave a petition asking for the release of the suffrage prisoners presently being held, and for President Wilson to recommend to Congress that it approve the Anthony Amendment so that it can be sent to the States for ratification.

“The pickets have made the psychological mistake of injecting into this stage of the suffrage campaign tactics which are out of accord with it. Every reform, every change of idea in the world passes through three stages – agitation, argument and surrender. We have passed through the first two stages and entered into the third. The mistake of the pickets is that they have no comprehensive idea of the movement and are trying to work this first stage in the third. We stand on the threshold of final victory, and the only contribution these women make to it is to confuse the public mind.”

However, according to Dora Hazard, who heads the Syracuse, New York, branch of the National Woman’s Party, many members of the public in her area who disapprove of picketing our wartime President are far more offended by the lengthy sentences and unusually harsh prison conditions that have been imposed on some previous protesters, and the outrage of force-feeding now being carried out on Alice Paul and Lucy Burns in Washington D.C.’s District Jail. Since the National Woman’s Party’s campaign seems to be succeeding in keeping the issue of woman suffrage before the public and generating sympathy for those who take part in the protests – and therefore for the cause itself – the “Silent Sentinels” will continue their militant tactics.