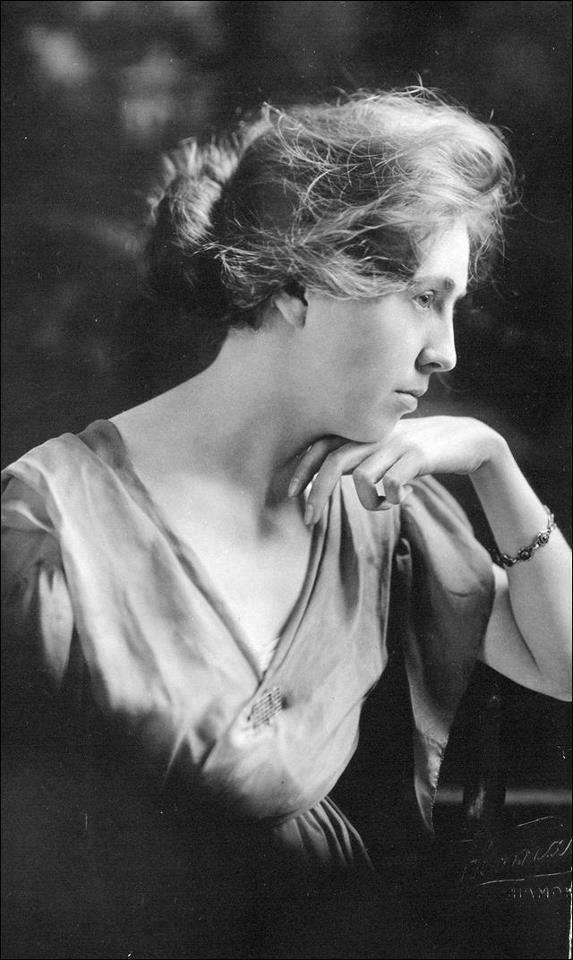 PHOTO: Art student and imprisoned suffragist Kate Heffelfinger of Shamokin, Pennsylvania. She is currently serving sentences totaling seven months for supposedly “blocking traffic” on the wide Pennsylvania Avenue sidewalk while standing along the White House fence with a banner in support of woman suffrage and critical of President Wilson’s failure to endorse or work for passage of the Susan B. Anthony Amendment while vigorously promoting democracy worldwide.

November 21, 1917: The number of imprisoned suffragists being subjected to the ordeal of force-feeding has suddenly increased from two to five. Lucy Burns and Dora Lewis, leaders of the hunger strike at Occoquan Workhouse, were transferred out yesterday and sent to join Alice Paul and Rose Winslow in the hospital ward of Washington, D.C.’s District Jail, where Alice and Rose are in their fourteenth day of force-feedings. Kate Heffelfinger has also joined the ranks of those singled out for this form of legalized torture. According to a statement given out by the National Woman’s Party tonight:

“Fearing their death in Occoquan, Superintendent Whittaker last night moved Mrs. Lawrence Lewis of Philadelphia and Miss Lucy Burns of Brooklyn to the Government jail in Washington. Miss Burns was force-fed at Occoquan before leaving. Her struggles were heard by other prisoners in the next cells, who describe them as terrifying. It required five guards to hold her during the feeding. Mrs. Lewis was fed after her arrival at the jail.”

Kate Heffelfinger, who has been on a hunger strike at the District Jail for over a week, was taken to the hospital ward last night and is now undergoing the ordeal as well. A note she wrote today has been smuggled out and reads:

“Three times a day for fourteen days Alice Paul and Rose Winslow have been going through the torture of forcible feeding. I now know what the torture is – the horrible gripping and gagging of swallowing six inches of stiff rubber tubing. Such a strain on the nervous system is not to be imagined. That over, there is the ordeal of waiting while liquids are poured through, then the withdrawal of the tube.”

On other fronts in the battle for suffrage, the New York State Woman Suffrage Party met for the second day of its convention. The first order of business was to clear up a misunderstanding in regard to one proposal that caused a great deal of controversy and generated much publicity yesterday. The “reprisal plank,” as presented to the convention – and the press – appeared to be aimed at taking revenge upon any legislator who had previously opposed suffrage, and was, as Mary Garrett Hay described it, “narrow, vindictive and vengeful.” The resolution as read, said: “At the next primaries and election we should campaign against certain candidates to State and Federal offices who have consistently opposed woman suffrage and whose records show them to have been opposed to the interests of women and children and to humanitarian legislation in general.”

At the board meeting where the resolution was discussed, the words “who have consistently opposed woman suffrage” were struck out before passage, but the W.S.P.’s Secretary had accidentally left them in when she read the proposal to the delegates. Vera Boarman Whitehouse, the organization’s president, said: “The resolution, as passed, did not contain any such clause, although as presented it did. The error was with our press department and the Party does not wish to go on record before the public as determined to carry on any such campaign.”

As to how the Woman Suffrage Party intends to accomplish its goal of helping bring about nationwide woman suffrage, a number of officers said they will try, in a friendly, responsible way, to convert those who are opposed or uncommitted to the Susan B. Anthony (woman suffrage) Amendment. But a companion resolution, which would make support for the amendment the only consideration upon which women voters should judge a candidate, may prove almost as controversial as the “reprisal plank.” Some delegates have noted that a candidate could favor the Anthony Amendment but be regressive on other issues regarding women, or be less than totally supportive of our nation’s war effort. So, this resolution will be discussed at length as well, and possibly be amended.

A much less controversial resolution, expected to pass easily, would redefine the purpose of the organization now that its initial goal winning the vote in New York State has been accomplished: “The objects of this organization shall be to secure equal franchise rights to the women of the United States; to collect and disseminate information upon political and social problems, and to undertake such activities as will further humanitarian legislation, benefit moral conditions, and especially protect the interests of women and children.”

Though obviously not as militant as the National Woman’s Party, organizations such as the Woman Suffrage Party and the National American Woman Suffrage Association still have huge numbers of members, do massive amounts of work promoting our cause, and have great influence and prestige. The recent winning of the vote in New York, the nation’s most populous State, provides ample proof that such groups can achieve meaningful accomplishments.

But winning nationwide victory will clearly require the aggressive tactics and personal sacrifices of National Woman’s Party militants as well. Though our greatest concern should be for the imprisoned “Silent Sentinel” suffragists jailed for peacefully picketing along the White House fence, we should also express our support for those who use traditional methods of promoting the cause. Every pro-suffrage organization helps in its own way to bring the day nearer when “Votes for Women” will be transformed from a slogan on buttons, pennants and banners into a guarantee written into the United States Constitution.