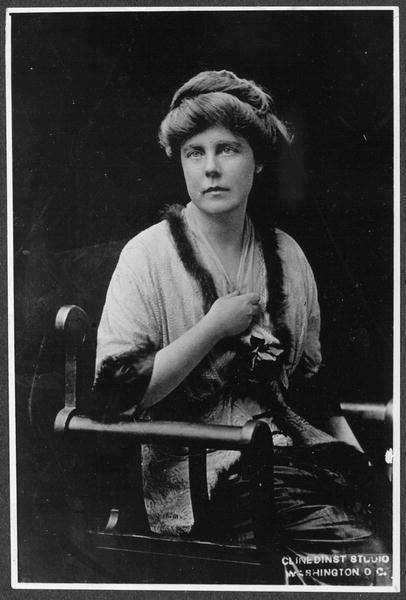 November 22, 1917: Two major developments today regarding the suffragists imprisoned in Occoquan Workhouse. The most encouraging action was a statement from the U.S. Department of Justice. It will conduct an official investigation into the atrocious conditions and acts of brutality inflicted on the “Silent Sentinels” serving time in Occoquan for peacefully picketing President Wilson along the White House fence. The campaign’s goal is to prod him into supporting the Susan B. Anthony Amendment to the U.S. Constitution, which if passed by 2/3 of a Congress controlled by his own party, then ratified by 36 of the 48 States, would explicitly and permanently ban sex discrimination at all polling places nationwide.

In another positive development, Representative George B. Francis, Republican of New York, made an official demand to District of Columbia Commissioner William Gwynn Gardiner that Superintendent Whittaker be removed from his position at the Workhouse due to his mistreatment of the prisoners in his custody. Representative Francis made an inspection of the prison, and said that authorities were far from cooperative in helping him determine conditions there, but that: “What guarded information I could obtain from the pickets leads me to believe that they received inexcusable rough treatment.”

Despite the fact that Lucy Burns and Dora Lewis, leaders of the week-old hunger strike at Occoquan, have been transferred to D.C.’s District Jail and are being subjected to force-feeding, the remaining strikers remain as committed as ever. With a hearing about the legality of confining the “Silent Sentinel” pickets in Virginia over an alleged “offense” that took place in D.C., as well as about investigating the allegations of brutality toward them scheduled for tomorrow in U.S. District Court, Superintendent Whittaker has suddenly switched tactics. Instead of threatening the rest of the suffrage prisoners with force-feeding to get them to break their fast, he offered them fried chicken and other tempting treats today. All food was refused, and the hunger strike begun after a night of terror at Occoquan on the evening of the 14th continues.

Though Workhouse authorities are temporarily on their best behavior a day before being grilled in court about the prison’s shortcomings and the abuses of women in their custody, nothing has improved at D.C.’s District Jail. Alice Paul and Rose Winslow are enduring their 15th day of three-times-daily force-feedings. Kate Heffelfinger has been getting the same treatment since she was moved to the hospital ward day before yesterday. Lucy Burns and Dora Lewis arrived from Occoquan two days ago, and are also being force-fed in Warden Zinkham’s prison. Lucy Burns has been resisting more than any of the others, and therefore is suffering the most. Instead of the feeding tube being inserted through the mouth and then down the throat, hers is inserted through the nose, and there are reports circulating at National Woman’s Party headquarters tonight that the sounds of great struggles are heard by the other prisoners every time she undergoes this ordeal.

Elsewhere, the New York State Woman Suffrage Party wound up its convention in New York City today, and managed to get through the final controversies with good feelings and enthusiasm for the cause still intact. The first resolution debated today was one which read: “In view of the likelihood of the immediate submission of the Federal [suffrage] amendment to the State legislatures for ratification, we should campaign against the nomination or election of any candidate for the New York State Legislature, and campaign against candidates for Congress, who will not agree to indorse the Federal amendment, providing the Federal amendment has not passed before the next Congressional election which takes place in 1918.”

But Mary Garrett Hay noticed something was missing from the resolution, and to great applause, she said: “I move we amend it by adding, ‘but we wish it understood that we do not put loyalty to the Federal amendment before loyalty to our country.’ ” Though some felt this was dignifying the charges by opponents that suffragists are less patriotic than anti-suffragists by answering the accusations, the motion passed overwhelmingly, and candidates will be judged on both their stand on suffrage and their support for our war effort.

A resolution introduced by Harriet May Mills sought to change the name of the group to the “New York State League of Women Citizens” now that the fight for suffrage has been won in the Empire State. After a lengthy debate, the proposal was rejected.

One final controversy was averted. There is a vote coming up this spring in Rochester on a local prohibition measure, and a delegate who had been approached by a leader of the local anti-saloon league asked the convention to endorse the proposal. Regardless of what their personal feelings may have been, no one seemed eager for the Party to take a stand on a prohibition measure because the “antis” are constantly trying to hurt the suffrage cause by linking it with this controversial issue. But Hay came to the rescue and suggested the matter be referred to the Executive Board for a decision at some time in the future.

The convention adopted the following as a Declaration of Principles, as offered by Alice Duer Miller:

“That with the increase in power that comes to us with the ballot, we render our pledges of loyalty and service to our country.

“The decision of the voters on November 6, having settled the question of woman suffrage in New York State, and all women are enfranchised citizens and must meet those new duties and obligations, and though the suffrage party is throwing the force of its organization behind the Federal amendment, its purpose otherwise is to develop a plan of education in order to assist in fitting all women for citizenship.

“That to all those women who desire to serve their Government effectively, who wish to know and then act, so that the injustices and difficulties under which many of the citizens of the State live and labor be abolished, we, the Woman Suffrage Party, extend a hearty welcome.

“That we express our gratitude to the voters of New York State for having recorded their belief in complete democracy.

“That we express our gratitude to the President of the United States for his generous and effective assistance; to the Governor of the State for his long continued support, and to all organizations and individuals who have helped us to win the privileges of full citizenship.”

Tomorrow a hearing for the “Silent Sentinel” White House pickets jailed in Occoquan begins in Judge Edmund Waddill’s court, and since he has ordered that they all be brought to the courtroom, it means that for the first time in over a week we will be able to see them for ourselves, objectively judge their condition, and hear their personal testimony, rather than have to rely on smuggled notes and hearsay. Some very compelling stories may be about to be told, and anyone who doubts that those who believe in “Votes for Women” possess great courage and devotion to that worthy cause will be unable to retain those doubts much longer.