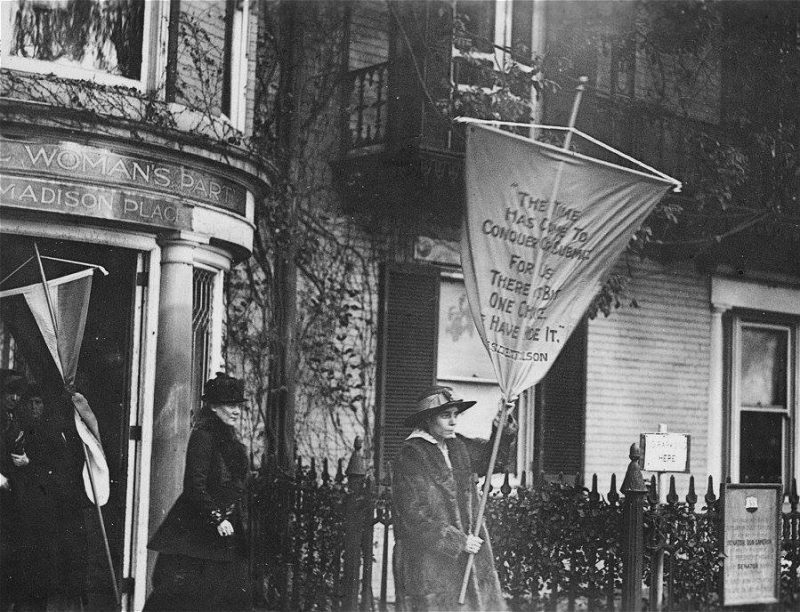 PHOTO: Alice Paul, carrying a banner, followed by Dora Lewis, and other National Woman’s Party members, leaving the party’s headquarters on their way to an October 20th demonstration in which Paul was arrested. On October 22nd, she was given a 30-day sentence for that action. This was in addition to a six-month sentence for a similar protest earlier. The banner reads: “The time has come to conquer or submit. For us there can be only one choice. We have made it.” The quote is from a wartime speech by President Wilson.

November 8, 1917: The already outrageous treatment of peaceful suffragist pickets by the authorities became even more disgraceful today. Alice Paul, serving two sentences totaling seven months for picketing outside the White House fence, has now begun to undergo force-feeding, imposed on her seventy-eight hours after beginning a hunger strike. She has been serving her time at the District of Columbia Jail since October 22nd and is presently in the prison hospital.

This is not Paul’s first experience with such an ordeal, so she knows exactly what she’s facing. On November 9, 1909, she was arrested in London, England, for taking part in a suffrage protest at a banquet in the Guild Hall, and sentenced to 30 days of hard labor in Holloway Jail. She and another protester got in early by disguising themselves as scrubwomen, and when Prime Minister Asquith paused during his speech, they shouted: “How about votes for women?” Upon imprisonment, she refused to wear jail clothes or perform any labor, and immediately began a hunger strike. Soon the twice-daily brutal ordeals of force-feedings started.

“Silent Sentinels” of the National Woman’s Party have been picketing President Wilson by standing along the White House fence for many hours each day since January 10th. They are highlighting the hypocrisy of Wilson’s vigorously promoting democracy around the world while refusing to help bring democracy to the female half of his own country. Though he favors woman suffrage if won an a State-by-State basis, he has failed to endorse, or work for passage of the Susan B. Anthony Amendment to the U.S. Constitution, which would outlaw sex discrimination at polling places nationwide.

The pickets – whose large banners often display the President’s own words praising the right of citizens to choose their own leaders – have over the past 10 months encountered bitter cold, driving snow, pouring rain, summer heat and humidity, plus arrests and imprisonment. Ever since the U.S. entered the war in April, hostile crowds have attacked the pickets for criticizing our wartime President, and have often stolen or torn their banners.

Rose Winslow, another of the imprisoned suffrage pickets, has taken up a hunger strike as well, and is also in the prison hospital ward. Both women are protesting denial of “political prisoner” status, the extra restrictions put on suffrage prisoners only, as well as the prison diet, which consists mostly of salt pork and cabbage. Other prisoners – even murderers – have the opportunity to supplement their diets with food from the outside, have access to newspapers, exercise, and fresh air. But all of these rights are denied to the “Silent Sentinel” White House pickets who have been convicted on minor – and false – charges of “blocking traffic” on the wide Pennsylvania Avenue sidewalk.

When Paul became ill due to a number of factors, and first entered the hospital, she was offered the opportunity to have milk and eggs. But she refused to accept them unless all the suffrage prisoners could have the same improvements in their menus. Now Paul is getting milk and eggs via a rubber tube forcibly inserted down her throat by the hospital staff.

Day before yesterday, Dr. Cora Smith King, Alice Paul’s personal physician, was allowed to visit her, and said that Paul was even thinner than when she entered the prison. Paul told King at the time: “If we are to be starved, I prefer to be starved all at once. There is no use giving us special food today and not tomorrow simply to keep us alive as long as possible.”

Though no one is being allowed to see or communicate with the prisoners at this time, contributions and words of support can be sent to the headquarters of the National Woman’s Party at Cameron House, 21 Madison Place N.W., Washington, D.C.

Coming just two days after the exuberance of winning woman suffrage in New York State, today’s development is a sobering reminder of how much sacrifice and work remain until final victory is achieved.