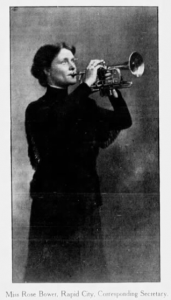 Rose Bower was born on May 16, 1873 in Vermillion, Dakota Territory to a family that was among the earliest settlers,  arriving in 1870. The granddaughter of abolitionists and a childhood member of the popular Bower Family Band, Rose and her family moved to the Black Hills in 1885.  In early adulthood, she worked as a teacher and librarian in Rapid City.  One of her sisters was Alice Bower Gossage, a Rapid City newspaper editor and fellow suffragist.

In, 1907, she attended a state suffrage central committee meeting at Highmore and served as secretary of the South Dakota Equal Suffrage Association under president Alice M.A. Pickler. At the same time, Bower wrote a column in the Hot Springs Weekly Starfor the Women’s Christian Temperance Union (WCTU) in which she also advocated for suffrage. In 1908, she served as state superintendent of the WCTU franchise department and president of the Black Hills District WCTU.

Her statewide participation in the campaign was ignited in January 1909, when she attended the state legislature as a suffrage advocate with Edith Medbery Fitch and Nina Pettigrew.  In the 1910 census, she was listed with the occupation of a “woman suffrage lecturer.” She wrote press letters to newspapers, spoke on suffrage across the state, and played her cornet.  In their account of Bower’s work, the state organization wrote: “she stops one day in a town, stirs them up, wins votes, whistles for money and passes on.  Her reports are cheerful and cheering,” and they reported at the national convention that Bower, as “an experienced worker, is devoting her entire time to the cause and is accomplishing good results.”

Bower was again in the field during the 1914 state suffrage movement, campaigning through sparsely-populated counties in south-central and northwest South Dakota.  At one location in Harding County, Bower’s party spoke on the Fourth of July “on the top of Lodge Pole Butte at a picnic many miles from a shade tree … with a flock of two thousand sheep grazing around us.”

Her suffrage campaign work also extended beyond South Dakota.  In 1912, she dedicated her musical abilities to the campaign in Chicago and made speeches in Ohio. In 1915, Carrie Chapman Catt recruited Bower to use “her cornet and her whistling ability to catch the crowds” for the state campaign in New York, which included playing for a special event at the Votes for Women Restaurant at 70 Wall Street in Manhattan in September 1915.

In the 1916 campaign, she accompanied a group of out-of-state campaign speakers called the “suffrage flying squadron” on their tour around the state.  In January 1917, she was again at the state legislature, lobbying for what became the suffrage amendment that finally succeeded at the polls.

In October 1917, after her father’s death, she took over care of her mother and the family ranch in Custer County.  In 1927, after her mother’s death, she returned to Rapid City, where she continued local club work, managed her family estate, and took an interest in local music life—playing with the civic orchestra and singing with the civic choral club.  Rose Bower was 92 when she died on July 26, 1965.