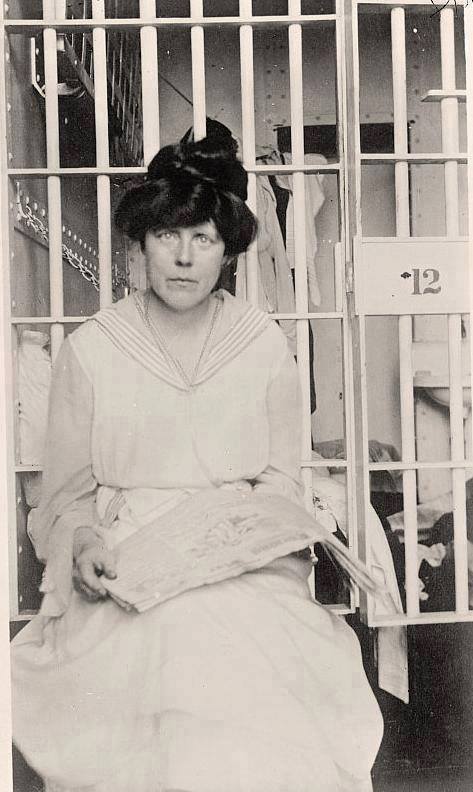 PHOTO: Lucy Burns during a recent term in Occoquan Workhouse.

September 11, 1917: Today saw a celebration of courage and triumph in Washington, D.C., as well as optimism despite the defeat of a suffrage referendum in Maine. Six “Silent Sentinel” suffragists who had been serving time in Virginia’s infamous Occoquan Workhouse for picketing at the White House were honored at a banquet earlier this evening at Cameron House, headquarters of the National Woman’s Party.

The picketing has been going on since January 10th to point out the hypocrisy of President Wilson vigorously campaigning for democracy around the world while refusing to do anything to help get the Susan B. Anthony (woman suffrage) Amendment through a Congress controlled by his own Democratic Party.

Over the past eight months, pickets have endured extreme cold, snow, and rain, then heat and humidity, attacks by mobs, and finally arrests and jail sentences in the harshest of prisons. But tonight was a time to celebrate the freedom – temporary as it probably is – of six of the many picketers who have been willing to endure imprisonment for the sake of winning the vote.

Alva Belmont, one of the principal speakers, left no doubt about her feelings toward the Wilson Administration or the courts, as she praised the recently released Sentinels:

“We come together tonight to honor the gallant six who have so bravely endured persecution at the hands of the Government, which has used its power to oppress women instead of liberating them. The present undemocratic Administration, on technical and unproved charges, and in court trials which have been a bitter travesty on justice, has dared to imprison American women of patriotism and distinction in a filthy workhouse, in order to suppress the insistent demand of women for their political freedom.

“An Administration which could be stupid and vicious enough to meet this appeal by such medieval methods proves that it is hostile to the liberal movements of the world, and that it is trying to smother the needs of democracy at home. Such an Administration, if it does not cease its cowardly persecution, should be shorn of power in the next Congressional election.”

The news from Maine, where a suffrage referendum was defeated by a 2-1 margin yesterday, was nothing to celebrate, of course. Local suffragists fought a good campaign, distributing 1,500,000 leaflets, or 10 for every eligible voter, and Deborah Knox Livingston traveled vast numbers of miles around the State speaking and raising money. But there was never much hope for a victory in the conservative State of Maine’s first suffrage referendum due to the short time between the measure being placed on the ballot and Election Day. Very low voter turnout may also have been a factor.

But Empire State suffragists are still optimistic about the suffrage referendum coming up on November 6th. New York and Maine are very different States, and conditions today are quite different from those two years ago when the 1915 New York State referendum was defeated, so the results should be much different eight weeks from now. According to Carrie Chapman Catt:

“A good deal of suffrage education has been inculcated that will count toward future victory. We have learned to take what looks like failure as the forerunner of success. Even in the Western States it has taken several campaigns to win. I understand that a Maine ‘anti’ hopes the question is settled in Maine for a long time to come, but the suffrage question is never settled until it is settled affirmatively. It is true that there probably never will be another campaign in Maine except for the purpose of ratification. The Federal suffrage amendment is surely going to pass and soon. The effect of every State’s repudiation of the suffrage plank in the national platforms of all political parties can only serve to focus the efforts of the National American Woman Suffrage Association anew upon the Federal route to the suffrage goal. More and more of our work concentrates on Washington as the immediate focal point.”

Dudley Field Malone, who has been an advocate and legal counsel for the White House pickets, agreed that the days of State referenda are probably over:

“It took the liberal and progressive elements of the men and women in Maine nearly twenty years before they were permitted to put a suffrage amendment to the voters of that State, and a similar suffrage amendment may not be submitted to the electorate for twenty years more because of antique political methods in Maine. In a democratic republic this is a denial of justice and democracy, without which there would be no progress. The situation in Maine proves that the most just and speedy way to enfranchise all women of the country is by passing the Federal suffrage amendment through Congress.”

Anti-suffragists are expressing their usual optimism that the battle is over. Alice Hill Chittenden, President of the New York State Association Opposed to Woman Suffrage, said:

“Woman suffrage has not carried a single State through popular elections since 1914, when the two small States of Montana and Nevada extended suffrage to women, and since that date has been defeated in twelve States, namely, South Dakota, Ohio, North Dakota, Nebraska, Missouri, New Jersey, Massachusetts, Pennsylvania, New York, Iowa and West Virginia, Maine yesterday making the twelfth. The total majority for suffrage in Nevada and Montana amounted to about 7,000. The results in Maine point the way to defeat of woman suffrage in New York on November 6th. Most people regard the question of woman suffrage as an intrusion at this time, when the whole mind and heart of the nation is engrossed in the great war upon which we have entered. This is a time when the man power of the Government is needed; that is the one power which can enforce law. I cannot believe the men of New York State will make the fatal mistake of adding to the electorate at this critical time some two million votes.”

But despite the latest obituary for the suffrage movement by its critics, it’s healthier than ever. In the Empire State the campaign has been large, well-funded, and has been running on a continuous basis since the 1915 referendum’s defeat. And regardless of how that New York contest may come out, women are already a substantial voting bloc in the Western States where they have full voting rights.

The addition of the element of militance by the National Woman’s Party and its White House pickets may be the final ingredient to success, however. Pressure on President Wilson to do something meaningful to aid the suffrage movement is growing, as is sympathy for the women who have been jailed for exercising their right to protest against being excluded from the political process for no other reason then their sex.

Victory may not be at hand, but it is coming into view. Though a campaign in the nation’s largest State is certainly worthwhile, and will be of immense practical and symbolic value, there is a rapidly growing consensus that the Susan B. Anthony Amendment is the only practical route to nationwide suffrage. So we now know how victory will come about, the only question is when.