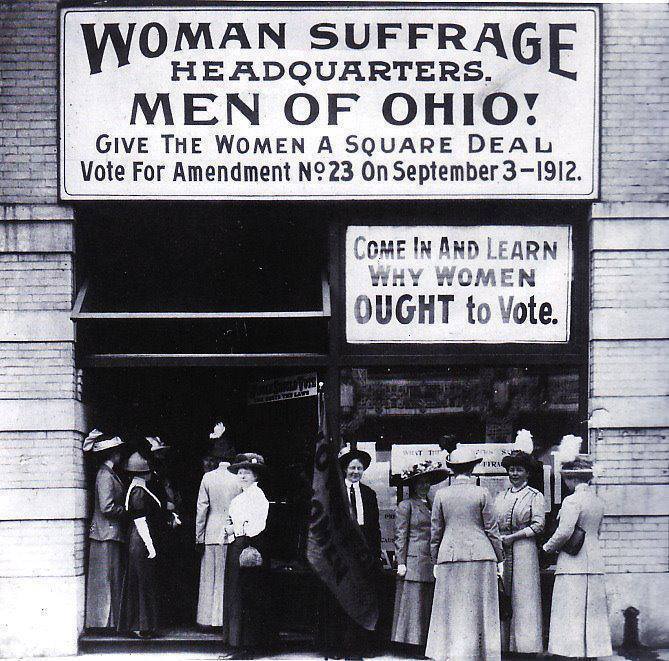 September 3, 1912: Despite a valiant effort, this year’s Ohio suffrage campaign is ending in defeat tonight. Attempts to get the issue of “Votes for Women” on the ballot here date back decades, and finally in late May of this year a State Constitutional Convention approved putting such a proposal (Constitutional Amendment #23) on today’s special election ballot. This gave our side just over three months to overcome the entrenched and well-funded opposition of the liquor industry as well as refute the usual anti-suffrage arguments.

The campaign was run by Harriet Taylor Upton of the Ohio Woman Suffrage Association. She is an experienced suffragist, and was Treasurer of the National American Woman Suffrage Association from 1894 to 1910. She raised an impressive war chest of $40,000, and was assisted by over 50 full-time workers out in the field, plus large numbers of local volunteers in each community. The highlight of the campaign was a colorful suffrage parade in Columbus last month, in which over 5,000 took part.

National momentum seemed to be swinging in favor of suffrage, so there were great hopes for victory in the Buckeye State. Last October, California approved a suffrage referendum, nearly doubling the number of women voters in the U.S. overnight, and then in May, there was a hugely successful suffrage parade in New York City. But Ohio seems to have brought the advance to a temporary halt.

Among the major difficulties encountered here was a series of anonymous handbills that apparently succeeded in tying the issue of woman suffrage to prohibition in the minds of the State’s male voters. Ohio has 125 brewers (only 4 States have more) and 14,210 retail liquor dealers, or one for every 69 men in the State, so brewers, saloonkeepers and their patrons are a major force to be reckoned with. Suffrage organizations tried to reassure voters that suffrage and prohibition are separate issues, and that enfranchising women would not automatically lead to the banning of alcohol, but fear of such a possibility was widespread. The Ohio Woman Suffrage Association offered a $100 reward for information about the authorship of the anti-suffrage handbills, but exactly who published them remains a mystery tonight.

The vote today was quite light, despite 42 amendments appearing on the special election ballot, covering a wide spectrum of issues. So, it’s not known if suffrage would have carried if the turnout had been high. Amendment 23 is faring especially poorly in many of the large cities. This is a common phenomenon, because the saloonkeepers tend to have great power in big cities, and in this State the major breweries employ a lot of people in and around the largest cities.

Fortunately, Amendment #6, which provides for Initiative and Referendum is passing by an overwhelming majority, so suffrage leaders are expressing confidence that they can get suffrage on the ballot again by going directly to the people, instead of having to lobby the State Legislature to put it there, or wait for another Constitutional Convention.

Despite tonight’s disappointment, there’s still some room for optimism. Five other States have upcoming suffrage referenda on the ballot, so hopefully a win in Wisconsin, Michigan, Kansas, Arizona or Oregon will get our victory train back on the tracks in just a couple of months!