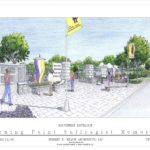 Click here to see a 3D animation of the planned memorial.
Many thanks to the artists of Boston University’s Center for Digital Imaging Arts (CDIA). 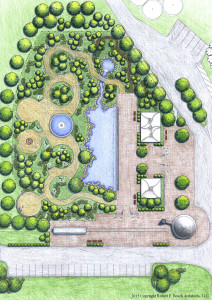 The Memorial will be located in the grassy area west of the brick plaza, benches, and wayside markers shown in the photograph at the right.  The Memorial will be large enough to accommodate groups arriving by bus and even special events.  The Interpretation and Design committee aims to create a memorial that honors the strength and resourcefulness of the suffragists involved and the significance of their struggle.

See the original architectural drawing the concept plan above; with the design of the new cultural area, there has been a slight shift in the location of the Memorial to the West and away from the brick kiln.  Some of the conceptual design features for the Turning Point Suffragist Memorial include: 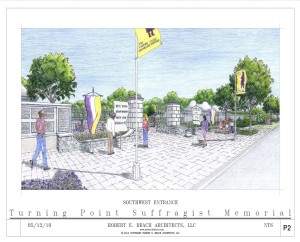 Entrance Plaza Gates are a replica of the White House gates where suffragists stood as “silent sentinels” demanding the right to vote and later held “watch fire for freedom” rallies. Lists of donors will be displayed on a wall, the Donor Wall, next to the fence and gates.

Commemorative Banners anchoring the entrance replicate those carried by the suffragists. 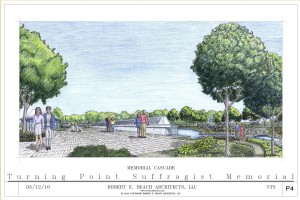 Memorial Cascade features a waist-high wall topped with a plaque for each suffragist being honored, e.g., those imprisoned in 1917 at the Occoquan Workhouse.  The plaques include the name and other information and will be similar in design, e.g., in relief, to the “Jailed for Freedom” pin designed by their leader Alice Paul.  Behind the row of plaques, water cascades into a large pool.

Footbridge over a waterfall (at the right in the drawing above) leading  to the winding path with informational stations and a Memorial Meditation Garden symbolizes the crossing over or advancement of the movement and signifies the continuing push for equality.

Nineteen Informational Stations along the winding path present the history of the suffragist movement and the story of the women held at the Occoquan Workhouse.  Volunteers on the Interpretation and Design Committee include historians and curators, including those associated with the Sewall Belmont House and the Smithsonian’s National Museum of American History, authors, and academic experts.  The Committee has defined the messages of the informational stations in groupings as follows.

I. The Background and Context. The informational stations in this group are:
1. Forward out of Darkness (early status of women)
2. Seneca Falls
3. Remember the Ladies? (The 13th, 14th, and 15th Amendments)
4. Minor v. Happersett (1874) – No Voting Rights for Women
5. Suffrage State by State

II. The Aggressive Campaign.  This is the period when Alice Paul led the campaign in Washington DC with focus on the President and Congress. The informational stations in this group are:
6. The 1913 Suffrage Parade (National American Woman Suffrage Association)
7. Alice Paul and the National Woman’s Party (1917)
8. The Silent Sentinels
9. Keeping the faith in wartime
10. Choosing Prison
11. Occoquan Workhouse
12. Political Prisoners and Hunger Strikes
13. The Night of Terror – Nov 1917 and the “turning point”
14. Women release from prison
15. Honoring the prisoners

III. The Legislative Struggles – Amendment Passed and Ratified.  After the public became sympathetic to the suffragists due to their brutal treatment in prison (the Occoquan Workhouse at Lorton), the struggle continued.  The informational stations in this group are:
16. 1918 Wilson announces support for the Suffrage Amendment (Stalls in Senate, watch fires, burning the president’s words)
17. Congress passes 19th Amendment (Stalls in Senate, Prison Special train tour)
18. Alice Paul sews the final star on flag for each state ratifying women’s suffrage (fight for ratification, Tennessee story, Victory celebration)

IV. The Challenge. The 19th and final informational station, Forward into Light, addresses events after universal woman suffrage became law, the continuing need for vigilance and reform, and the quest for full equality.

The Pavilions. Two structures located just inside the entrance gates, provide space for additional information using interactive kiosks, space for holding lectures or showing videos, and a small gift shop.  The kiosks will include further information on state suffrage efforts, as well as a list our Charter members and contributors.

The conceptual plans have been approved by the Northern Virginia Regional Park Authority and the decision has been made to proceed with the Memorial.